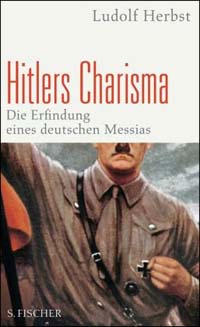 The bond between the German people and Hitler remains a central puzzle in twentieth-century German history. Skeptical contemporaries scoffed at the dictator's resemblance to a second-string provincial café-waiter (28). Yet the man secured uncontested command of the most thoroughly bureaucratized modern Western state. He ruled through terror, guile, and an authority unprecedented in developed societies. And he led his people triumphantly to the brink of national suicide.

As Ludolf Herbst notes in his work on the origins of Hitler's grip upon the German people, Max Weber did not live to see National Socialism, but nevertheless offered an increasingly popular answer to the riddle: the ideal-type of charismatic domination. Yet as Herbst suggests in his astute introductory analysis of Weber's Herrschaftssoziologie and its relevance to National Socialism, the numerous efforts to thus explain the regime have for the most evaded two central difficulties. Weber repeatedly insisted that the charismatic bond can only exist in its "pure" ideal-typical form at birth, in the community of leader and disciples. Thereafter amalgamation with other forms of authority, "routinization," and likely decay necessarily set in. Yet even before 1933 Hitler's ascendancy extended far beyond his immediate circle, and ultimately embraced much of the population. And in apparent contradiction to Weber's dictum that charisma depends directly upon wordly success, Hitler's hold over people and armed forces largely endured despite the destruction of the Reich in 1942-45 from east, west, and above.

Herbst traces instructively the efforts - from Hermann Rauschning and Heinz Neumann to Martin Broszat and Hans Mommsen - to apply Weber's framework to the functioning and dynamics of the regime. Ian Kershaw and Hans-Ulrich Wehler however - in Herbst's offhand unsubstantiated critique - fall short of "the current state of research" for purportedly attempting "to explain the entire National Socialist regime through this concept" (12, 32-33, 50, 239; 287 note 56). Herbst's own proposal derives primarily from an American sociologist, Arthur Schweitzer.[1] The seemingly mysterious compatibility of burning faith in the 'Führer' with large-scale bureaucratic structures - in contrast to Weber's ideal-typical polar opposition between charisma and bureaucracy - was in reality a common phenomenon. And Schweitzer, whom Herbst repeatedly cites, coined the term "synergistic charisma" for the mutually reinforcing roles of the leader and of the institutions he must inevitably create to exercise power. Those synergies might in turn provide the motor for the "cumulative radicalization" of the regime posited by structuralists such as Mommsen (38, 55-57, 258).

The body of Herbst's book is however less novel and focused than his theoretical discussion promises. He plausibly suggests that Hitler the man was scarcely the cipher at which so many biographers have sneered, a blank slide-screen upon which the German collective unconscious projected sinister dreams (61-62). Herbst is equally convincing on the German army's indispensable role - repeatedly underestimated until recently - in providing Hitler with his first real home; the foundations of his Weltanschauung; effective training as an agitator; a successful launch into Munich beer-hall politics; and - as Herbst might have added - the raw military power for Germany's second attempt at world domination.

Yet the book's core, which covers the allegedly calculating and coldly instrumental "invention" of Hitler as party and national 'Führer' in the 1920s, is less compelling. Herbst by design brings no new primary research to terrain extensively excavated as early as the 1960s.[2] He repeatedly downplays Hitler's demonstrable agency - his self-invention - and organizational expertise. The hapless Gregor Strasser instead figures as principal architect of the 'Führer'-myth central to the post-1928 national Volkspartei (216-217, 237-239). The "synergistic" dynamic that Herbst postulates thus resolves itself into the primacy of Nazi organizational Inszenierungskünste - a notion the author severely overworks. But neither the indisputable effectiveness of the NSDAP in selling Hitler nor the Party's sapiently tailored appeals to every conceivable interest-group are news. Nor do they explain sufficiently either the growth of the Nazi movement to 1933 or the unique character of Hitler's authority thereafter. If "charisma routinized as marketing-concept" (267) made the 'Führer', the German people were even more foolish than hitherto suspected, and far more misled than complicit.[3]

Herbst insists from methodological purism that individual testimony by Hitler followers is suspect, and warns sternly against belatedly falling victim to the "manipulative arts" of Nazi propaganda (13-14, 49-51). Yet both the pre-1933 electoral results and Hitler's personal message might have repaid additional analysis. Herbst shares the quasi-universal belief that sociological categories explain the Nazi vote (239-241). Yet in reality ideology - nationalist hatred - produced voting patterns in 1930-33 that largely fitted the template of the 1925 Hindenburg plurality.[4] Hitler himself proclaimed a future of renewed German greatness and of individual fulfillment: the "murderous pursuit of happiness".[5] And compounding the efficacy of those appeals was an organizational culture that the Nazis learned in the army, applied to politics, and ultimately imposed upon the entire nation. Herbst dismisses Ian Kershaw's "working towards the Führer" as a failed effort to "operationalize" the charisma-concept (32-33). But the now-famous 1934 phrase of the Nazi bureaucrat Werner Willikens (Fahnenjunker and artillery officer, 1912-19) was less an invocation of the 'Führer'-myth than an appeal to something older and far more deeply ingrained: mission tactics - Auftragstaktik. The creative freedom in pursuit of organizational goals that Prusso-German military culture conceded to subordinates proved an unparalleled explosive force, once conjoined with the limitless personal advancement that Imperial and Weimar Germany had been structurally incapable of offering, and that Hitler repeatedly promised - and delivered.

Herbst is absolutely right to suggest that other things beside Hitler's charisma were central both to Nazi domestic victory and to the durability, effectiveness, and frenetic aggressiveness of the ensuing dictatorship. But Nazi "marketing-concepts" are scarcely the most promising keys to the puzzle.

[3] Peter Fritzsche: Germans into Nazis, Cambridge MA 1998, and Life and Death in the Third Reich, Cambridge MA 2008, explores the conscious efforts of too many Germans to join in the National Socialist "future".