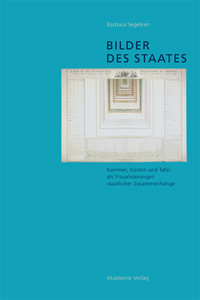 In weaving together histories of art, collecting, science, political theory, and economics, Barbara Segelken's Bilder des Staates compares the classification systems of early modern collections with the history of economic and political statistics. The author sets out to show that theories on art collecting and display are not just coincidentally related to the development of statistical tables. Rather, both provide a system that reinforces broad oversight and control of information that aids the ruler in establishing efficient and capable government. The book is divided into two main sections. In the first section, Segelken discusses theories on the organizational principles of the Kunstkammer, or cabinet of curiosities. She then ties these principles to the development of statistics as a form of representational description. In the second section, the history of the Berlin Kunstkammer and the development of the Prussian monarchy are placed within this framework.

Samuel Quiccheberg, whose treaty on the organization of the Kunstkammer has been linked to the Munich Kunstkammer of Albrecht V of Bavaria, envisioned an archive of pictures in the form of prints, drawings, and watercolors. His picture archive would inventory all of the objects in the collection as well as objects that had not yet been acquired, but nevertheless were viewed as fulfilling the goal of universality. Quiccheberg drew his ideas from Cicero's memory theater and Pliny the Elder's notion of ordering nature by material. Both involved creating a network of associations between objects that are classified into groupings and sub-groupings. Quiccheberg imagined objects displayed in boxes, vitrines, on shelves, and in closets and drawers. This was not just a matter of storage, but was meant to facilitate the fluidity of relationships. By means of display, the viewer could make associations between objects either similarly displayed or in physical proximity.

The Kunstkammer of the sixteenth century also informed the literary utopias of the seventeenth century. The utopian city model saw walls organized in concentric circles that would allow the display of an encyclopedic collection of images representing the totality of religion, art, and science. Images and objects would reflect new discoveries in astronomy, mineralogy, botany, and zoology as well as display the tools and mechanical implements used in their study. The organizational principles that established a relationship between objects in the Kunstkammer of the sixteenth and seventeenth centuries had the same function as the gathering of data and the establishment of scientific method in later periods. These principles were linked by common pedagogical aims that, by the late eighteenth century, led to the establishment of academies of science and art, as well as polytechnic universities. Art, science and technology were viewed as interrelated and the academies similarly were designed so that each could inform the other and offer the widest variety of interpretative possibilities.

More than reconstructing the objects with any one particular collection, at any given time, in mind, Segelken wants to lay a course for understanding the different media and viewpoints through which the collections can be understood in relationship to developing views of statecraft. She provides a brief overview of treatises published by such figures as the medical doctor Johann Daniel Majors, the naturalist Carl von Linné, and the philosopher and mathematician Gottfried Wilhelm Leibniz. Leibniz describes a physical theater that, like Quiccheberg's model, would not just include specific objects, but would encompass all possibilities for inclusion of objects not yet in it, and thus would be a sort of universal information hub. By the eighteenth century, the theoretical notion of art as an expression of power leads to its actual and practical application.

The other significant idea that can be traced from Leibniz back to Quiccheberg concerns the role of images as a key to comprehension. Quiccheberg believed that looking at a drawing or print combined multiple sensory perceptions, synthesizing knowledge and providing instantaneous oversight and understanding. Similarly, statistical data assembled in a table or graph reflected the wealth of the state in natural and human resources. The use of tables for ordering information thus becomes a logical conclusion to the idea of a visual representation. Segelken also discusses several Dutch still lives that depict accounting records and memos attached to a backboard via a system of ribbons, very similar to a system that Leibniz himself used. These enigmatic still lives now make perfect sense within a mode that preferences the visual in understanding not only objects, but also ordering systems that provide oversight to the viewer while promoting efficient government.

The second half of the book takes Berlin as a case study. In Prussia, a powerful state bureaucracy evolved alongside the development of the museum and educational institutions for which Berlin will become famous. The Berlin Kunstkammer, founded in the sixteenth century by Prince Elector Joachim II, plays a crucial role in formulating later political policy. The development of scientific method and the use of statistical tables were necessary outcomes of what could be considered the first great information age, an age that required new ways of ordering the world. By connecting the use of statistical tables to political economics and government oversight, Segelken shows important changes in how the state was viewed. Whereas in the Middle Ages the state was conceptualized as the body of the ruler himself, the use of tables allowed for an abstraction of the state that could continue beyond personalities and historical figures. The ruler may not become obsolete, but the state itself becomes the main protagonist.

Segelken presents a history of economics and political science within the context of the history of the early modern collection, a notion that has been touched on in previous scholarship, but here receives a comprehensive yet detailed examination. Her study provides a penetrating look at the example of the Berlin collections that is packed with interesting information and insightful interpretation. She clearly shows how early museology was a fundamental element of political acumen that manifests itself through the administration of the wealth of regional territories. This book goes beyond the generally understood notion of the collection as a reflection of the ruler. The author shows how the Kunstkammer played a key role in the establishment of modern political thought. Collecting and princely exchange were thus tactical political acts that represent a substratum of the political and cultural activities of the state. A model of what good interdisciplinary scholarship looks like, Segelken's meticulous research provides an important contribution that should prove useful for the investigation of a host of other issues. Like Quiccheberg's treatise, Segelken models her message in the way that she presents her information, offering a vast amount of material to consider while at the same providing a method for oversight and assimilation.