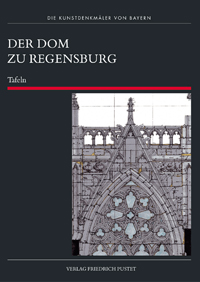 Over the past 25 years, a large and interdisciplinary team of researchers has worked to document the fabric of Regensburg Cathedral in unprecedented detail. Aspects of this work have already appeared in various venues, but the comprehensive and systematic presentation of the results has just begun with the publication of 'Der Regensburger Dom', edited by Achim Hubel and Manfred Schuller. This large volume, which contains only drawings, will eventually be accompanied by a volume of primary source documents, a volume of photos, and two volumes of analytical text by the project authors. Even when seen in isolation, the present volume makes an impressive contribution to the scholarly literature on Gothic architecture. The user engages with the book almost as an attentive visitor engages with a real cathedral, encountering first the overall outlines of the monument and then a whole series of intriguing details that document the many phases of its complex history.

And like a cathedral, the book is the product of meticulous hand-craftsmanship unfolding over decades. The hundreds of drawings it contains were manually drawn based on close observation of the cathedral made possible by the installation of scaffolding for building maintenance. Exploration of the volume underscores both the strengths and the weaknesses of this traditional and highly labor-intensive approach to the acquisition and presentation of archaeological data.

In their brief introductory pages, Hubel and Schuller observe that the Regensburg cathedral project is a kind of flagship study that cannot be undertaken everywhere. The resources and circumstances permitting a comprehensive survey of a major Gothic building come together only very rarely. Even in the case of the Regensburg study, in fact, the hundreds of new detail drawings produced since the 1980s are less than fully comprehensive. In the volume under review, therefore, they are presented alongside the older and more complete survey drawings produced in the 19th century, and photograms made in the 1930s, which have been scanned and digitally enhanced.

In many cases, the multiple generations of drawings are overlaid on each other, with the new lines shown in black and the older lines shown in grey. This manner of presentation underscores the methodological continuity between the draftsmen involved in the study under review and their ancestors working in an architectural drawing tradition that can be traced, in some respects at least, all the way back to the Middle Ages. Interestingly, though, this conservatism and consistency of method does not prevent the individual personal styles of the draftsmen from shining through. There is a striking contrast, for example, between the richly textured drawings by Philip Caston and the more crisply diagrammatic drawings by Katarina Papajanni, who succeeded Caston as a leading contributor to the Regensburg project.

Here too, the volume under review has something of the character of the cathedral itself, with subtly different handwriting evident in successive campaigns, all of which are unified in the service of one larger goal.

The scale of the Regensburg project begins to become apparent when one considers the organization of the volume under review. Figures 1-5 reproduce detailed drawings made in the field, with all of the dimensional notations still visible. These figures call attention the level of detailed stone-by-stone observation that went into the survey of the cathedral's fabric. Figures 6-33 are isometries of the whole building, showing the stages of construction at significant intervals between 1274 and 1500. These drawings, based on the analysis of primary historical texts and dendrochonology, powerfully convey the history of the workshop as the members of the Regensburg team have come to understand it. Figure 34 lists the crucial documented dates in this history, while Figures 35-39 provide helpfully color-coded plans elevations and sections that illustrate the extent of the successive building campaigns. Figures 40-45 are intellectually important, but less immediately satisfying, since they point outside the book itself by providing the inventory numbers of the original project survey drawings, which are now kept in Munich.

These figures thus demonstrate - like the text-free format itself - that the present volume can encompass the results of the Regensburg project only partially. The amount of information between its covers is nevertheless impressive, verging on overwhelming. Figures 46-54 are overall plans and sections produced at 1:200 scale, while larger synoptic plans are presented in fold-out form as Figures 55, 56, 71, 72, 158, 159, 167, and 168. The largest portion of the book records smaller elements of the building at 1:100 scale, with Figures 59-105 showing the interior, Figures 106-157 the exterior, and 160-185 selected details. The final section of the book, comprising Figures 186-196, reproduces a variety of particularly important plans and views of the cathedral, including two spectacular medieval drawings showing alternative schemes for the west façade, and nineteenth-century drawings by Otto Denzinger, who gave the cathedral its current twin-spired silhouette.

Although it is difficult to assess the impact of the Regensburg study by considering this volume of plates in isolation, the data presented here will clearly be of great value to scholars interested in the history of the Regensburg workshop, and in the building practices of the Gothic era more generally. Even just by themselves, the plates provide a combination of precision, legibility, and comprehensive coverage that few if any other building monographs can match. The level of care that has gone into the preparation of the plates is truly impressive. Only a few tiny errors seem to have slipped into the publication, as when a dendrochronological date is given as 1142 instead of 1442 in plate 34. Some may also question the alignment presented in plate 187 between the current façade and the unexecuted two-tower façade drawing, since the interpretation of the sockel zone in the drawing is somewhat ambiguous. And at times one wishes for a clearer demarcation between the black lines of the new drawings and the grey lines from the older survey data. But these critiques are almost laughably small, when measured against the total amount of rigorous data presented in the plates.

Since the Regensburg project was meant from the start as a kind of flagship initiative that would fully realize the potential of traditional archaeological and publication strategies, the larger questions raised by the present volume involve the viability and growth potential of the printed monograph format itself. One wonders, for example, about the audience for such books in a century increasingly dominated by digital media. Only a fairly small population of scholars will have the level of commitment and expertise to closely interrogate the hundreds of drawings in the Regensburg volume. But those who really want to engage with the dimensions and proportions of Regensburg cathedral will find it frustrating that the detailed survey data that informed the creation of the drawings cannot be recovered at high precision from the plates. In the second decade of a century when many architectural historians are comfortable using CAD systems, it seems that such information could profitably be presented in a 3D digital model, offered either on the web or as a supplement to the book. Progress in this direction is being made by scholars such as Stephen Murray and Andrew Tallon, who plan to incorporate 3D laser scan data of major French cathedrals into their broadly ranging website www.MappingGothicFrance.org. Such high-tech methods of data acquisition and presentation cannot and should not fully replace careful hands-on engagement with the building, but the rise of such new approaches certainly underscores the relative traditionalism of the Regensburg project.

Ultimately, therefore, the publication of the volumes associated with the Regensburg project is likely to stand as a sort of high-water mark for the production of traditional printed monographs on medieval architecture. Although the full impact of the project will only become clear with the publication of the remaining four volumes, consideration of the plates already suffices to demonstrate the meticulous care that has gone into analysis of the cathedral fabric and its history. The project has unfolded over the course of decades, like a genuine Gothic building campaign, and while the rise of new media may soon challenge the primacy of physical publications like this one, it is truly a pleasure to behold the product of such sustained and materially engaged scholarly attention.