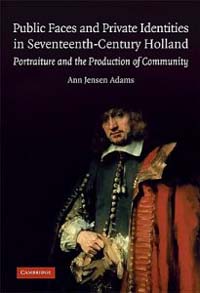 After decades of preoccupation with so-called scenes of everyday life, scholars of Dutch art are turning with increasing frequency to the subject of portraiture. [1] Among this new wave of attention, perhaps no contribution is as important as Ann Adams's Public Faces and Private Identities.

The book tackles nearly the entirety of the portrait enterprise in the Dutch Republic. In our era of scholarly specialization, the breadth of Adams's text is laudable. Rather than survey production, Adams seeks to interrogate what portraits meant to the individuals and communities who commissioned, displayed, and viewed these pictures. Ultimately, Adams argues that portraits actively participated in the production of the personal and communal identities that were fuelled by the various social and intellectual discourses of early modernity.

Chapter One places portraits alongside the emerging discourses of subjectivity. Adams connects portraiture to the projects of Descartes, John Locke, and others, many of which Adams reminds readers were undertaken within Dutch borders. Beyond a simplistic equating of self-awareness and self-interest with a desire to record one's appearance, the author considers the transformative possibilities of both portraiture and viewing portraits.

The second chapter addresses portraits of individuals. Here, Adams interrogates works by Miereveld, Pickenoy, and De Keyser and explores how portraits were believed to communicate the character of an individual. She explores how this was achieved through two divergent pictorial modes - the depiction of the impassive body and the portrayal of the individual engaged in a momentary activity. Devoting far more attention to the former, Adams explores how static portrayals cast individuals in idealized states, such as that of stoic tranquility. This project derives from an earlier essay by Adams, but she extends her position here. [2] As Adams cogently argues, idealization of sitters was not merely about flattering their appearance, but it also was a tool for rendering one's character. A noble or enlightened character was manifested through physical form. This gets at the conclusion of the chapter, that a portrait was an attempt to represent the individual through an image of the body. As in semiotics, which Adams invokes occasionally, the body was a sign for the individual. Though she devotes less attention to sitters shown in motion, Adams argues that this mode was designed to accomplish the same end. Momentary activity, especially being pictured in thought or active intellectual pursuit also was intended to depict the entirety of a personage.

The third chapter tackles instances where multiple members of a family appear within a single image. In the first part of the chapter, Adams argues that the novel imagery of the family together was a response to threats to social instability through a return to family values. The author identifies how conceptions of the state were often expressed in familial terms and, conversely, the family was often conceptualized in terms of the state. Thus, family imagery participated in discourses on power and society. The second half of the chapter considers these dynamics through Jurriaen Jacobson's portrait of the family of Vice Admiral Michiel de Ruyter. Adams argues that this painting served a dual purpose: it was a private image of Ruyter and family cohesion while the admiral was off at sea, and it operated as a public projection of the family's newly won social position to those who visited the Ruyter home in Amsterdam. Thus, the family portrait did not seek merely to record family togetherness, but to picture such union for the purpose of manipulating public perceptions for the benefit of those portrayed. This discussion initiates those of the ensuing chapters about how portraits sought to create social connections, and could be just as propagandistic as any other form of painting.

The fourth chapter examines the depiction of individuals in the guise of historical or mythological figures. In these, sitters positioned themselves in relation to carefully chosen literary or historical narratives. Adams attempts to connect this project to seventeenth-century conceptions of relational history wherein it was common to compare the past and the present. Doing so was a common mode of reflection. Thus, she argues, it was quite logical for sitters in the Dutch Republic to seek to communicate their identities through the enactment of historical narratives.

Chapter Five explores civic guard portraits. Adams seeks to propel understanding of this genre beyond Rembrandt who has dominated the literature on the topic thus far. Turning to the work of others, like Thomas de Keyser, Adams stresses the voluntary nature of the associations pictured to argue for militia group membership and representation of particular group membership as means for constructing public personae for individuals and the group. The portraits then operate as figurations of grouping and social bonding. Often those public identities, personal and collective, were politically motivated or informed. In many ways, this chapter is the most provocative. Adams's study thoughtfully treats the myriad social networks that individuals navigate - social, religious, class, ethnic, regional - and she offers one of the first studies to suggest how personal identities and subjectivities were relational, if not also communal, based on participation in these networks.

The sixth and final chapter is a theoretical coda wherein the author narrates how she traversed the constructs that led to the preceding investigations. Much of the focus is on reception theory. Adams purports to offer "a theory of identity formation with regard to cultural experiences in general and works of art in particular" (263) that she has tested against portraits. For some readers this chapter will provide a welcome methodological challenge. For those interested in the specifics of portraiture in the Dutch Republic, the preceding chapters are likely to be more appealing. Nonetheless, her arguments that portraits are "interventions into contemporary controversies and cultural issues" (270) are ones that all readers should contemplate.

In light of all the provocative interpretations offered throughout the book one is struck by the infrequent discussion of portraits as art. Most often, portraits are addressed as paintings, pictures, and images. While Adams does much to illuminate significant, previously overlooked meanings, the reader is left to wonder if or how portraits could have functioned as art as they surely must have, at least occasionally, for Rembrandt, Hals, and some others. Perhaps this omission is a result of Adams's decision to focus on painters like De Keyser who are less well-known today. Nonetheless, exploration of the interrelationships between portraiture and art would have added an additional layer to Adams's probing analysis.

In total, Adams's book is exhaustively researched and enticingly provocative. Adams's fresh look at portraiture should do much to propel future study of the material. Most notably, her arguments that portraiture possessed the potential to mediate interpersonal experience and to transform the way viewers thought and saw as a result deserves serious attention. Moreover, Adams's interpretations of images of families and militia groups begin to illuminate the roles of portraiture in shaping bonds between people, and in creating communities. As scholars have recognized for some time, the early modern era was highly concerned with self-awareness, self-fashioning, and personal subjectivity. Until now there has been too little work done on how these interests were not only singular, but also communal. As a result, Public Faces and Private Identities is a must read for all those interested in portraiture, the cultures of the Dutch Republic, personal and group identity formation, and the myriad discourses of early modernity.