Kevin M. Cherry: Plato, Aristotle and the Purpose of Politics 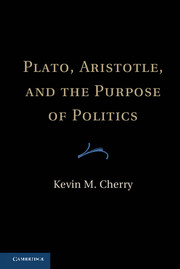 Aristotle's Politics begins with a chapter taking issue with the view that all forms of rule (e.g. monarchic, political, slavemaster) and all forms of community (e.g. household and city) are in essence the same. As is generally agreed by scholars, his obvious target is the claim about ruling couched in these terms that is made by the Eleatic Stranger at the beginning of Plato's Statesman. In this monograph Kevin Cherry has pursued the interesting idea of working through the way the Statesman's whole conception of politics - its challenges and purposes - contrasts with Aristotle's in the Politics. Cherry's argument (articulated in the first four chapters) is that while for the Statesman, 'it is the danger posed by a hostile nature that drives human beings together to form political communities', with politics consequently 'dedicated first and foremost to the preservation of human life (177), and associated with a '"value-free" approach to enquiry into political life' (136), the Politics by contrast makes fundamental 'a natural desire to dwell with one another and work towards a common goal' - with politics conceived as 'primarily concerned with the development and actualization of human flourishing' (177). Cherry finds a connected difference in divergent notions of political knowledge: for the Statesman it is basically theoretical, and has little except instrumental concern for virtue, moral ideals, or the souls of the citizens; for the Politics it is the ethically focused phronêsis of the Ethics. He goes on in Chapter 5 to argue that the Eleatic Stranger's outlook is radically different not only from Aristotle's, but from the Socrates of the Platonic dialogues. A final chapter (Chapter 6) considers the prospects for a contemporary Aristotelian approach to political theory, and in doing so engages with a variety of recent attempts in this vein, urging for his part that we should not abandon Aristotle's biological teleology too quickly or lightly. This is the part of the work which probably has most to offer to the general reader.

Cherry rejects, as I have myself, the common developmentalist line that the differences between the political thought of the Statesman and that attributed to Socrates in the Gorgias and Republic should be seen primarily as reflecting changes in Plato's own thinking. His own explanation is that the views Plato puts in the mouth of the Eleatic Stranger were 'sufficiently common in Greece in the fourth-century BC' that Plato must have decided to accord them a full philosophical treatment, without in any way subscribing to them himself (175; his book's title is therefore thoroughly misleading: the monograph does not aim to tell us what Plato thought on the subject). However no evidence is provided for this claim about fourth century Greece, other than Aristotle's use of the plural 'those who say' in reporting the thesis that all forms of rule are the same (but Aristotle notoriously says things like 'those in the circle of Democritus' when he means just 'Democritus'). In fact, of course, the cosmology of the Statesman myth, with its bleak story about the conditions of human life in our own cosmic era (which is what largely informs Cherry's talk of 'a hostile nature'), is most obviously indebted to Hesiod and Empedocles; and the nearest analogue to the knowledge the dialogue predicates of the king or statesman is the craft of kingship envisaged by Socrates himself in the Euthydemus. As for Greek history, Cherry seems to know little about it: he thinks Spartan kingship will have been the only form of it of much interest to Athenians at the dramatic date of the dialogue (399 BC) (21-22). But Persia and its Great King remained a key ingredient in the Athenian imaginary (and in their politics) throughout the fifth century and for at least the first half of the fourth: witness e.g. Xenophon's Anabasis and Cyropaideia, Plato's Menexenus, etc., and the renewal of Persian interest in Greek affairs from the treaty with Sparta of 412 BC.

The long and short of it is that Cherry does not make any serious attempt to locate the conception of politics he identifies in the Statesman either in Plato's other writings or in those of contemporary thinkers - leaving the implicit 'author' of that conception and the point of expounding it pretty much a mystery. It is also problematic that Cherry's reading of the dialogue is not particularly careful. When the Stranger finally discloses the nature of the telos of the weaving of temperaments that political activity achieves, he describes it not as survival or the preservation of life, but as a common life lived in concord and friendship, so that the city does not fall short of being as happy/flourishing as is within its compass (310B-C); the citizens will need firm true belief about fine and just and good things (and their opposites) in their souls (309C); and the true statesman will be wishing and able to allocate rightly to all what is just and holy with virtue and knowledge (301C-D). We seem to be not so far from the Republic and the Laws - decidedly not "value-free" - after all (Cherry has virtually nothing to say about commonalties between the Statesman and the Laws). Cherry does not notice the affinity between the directive (epitaktikê) function of the statesman's knowledge (260B-C) and Aristotelian phronêsis (EN 1143a6-10); that between Aristotle's mean and the Statesman's idea of the measured is vigorously downplayed.

But on Aristotle he is in truth a sounder guide, perhaps because he is not here striving for novelty. I liked in particular his stress on the importance Aristotle attached to popular participation in government (he rightly argues against those who see positive enthusiasm for democracy in the Statesman) (Chapter 3). He is right, too, that the Politics is friendlier to revision of laws and constitutional provisions than the Statesman (Chapter 4). What Cherry appears to care most about is the need for a return to an Aristotelian style of political theorizing. The often rather strained contrast with the Statesman ends up as something of a distraction from that main purpose.

Cherry's monograph is developed from his Notre Dame PhD dissertation - and retains features of the genre, not least in the author's frequent insistence on how he has seen things other scholars have missed. As is increasingly the case with English-language scholarship on ancient philosophy, particularly in the USA, there is no evidence in the bibliography or elsewhere of acquaintance with any scholarly literature not written in English.