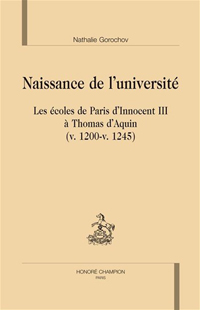 In this comprehensive study, Nathalie Gorochov traces the institutional, intellectual and social history of the early University of Paris. The book begins with the emergence of the universitas at the beginning of the thirteenth century and concludes in 1245 when, as the author notes in her concluding sentence, "Thomas d'Aquin vient étudier à Paris" (587). The subject is important because despite numerous studies on matters relating to the University of Paris, these formative decades of its history have remained vastly understudied. By the time the Angelic Doctor arrived, the university was a mature, autonomous institution with well-defined privileges and a sense of purpose. Yet we actually know very little about the people at the university who made this process possible. It is these masters and students who are central to Gorochov's illuminating story.

Gorochov's analysis unfolds in a strictly chronological fashion. She offers a richly documented, blow-by-blow account of the many conflicts, processes and personalities that helped shape the institution from 1200 to 1245. Each chapter focuses on a discrete time period, centring on major events. For example, chapter four (covering 1209-1215) begins with the 1210 Parisian synod condemning the followers of the late Amaury of Bène (importantly, this synod also ordered the works of the master David of Dinant to be burned and expressly forbade the use of Aristotle's so-called libri naturales). It continues by looking at the conflict over licensing between the masters and the chancellor John of Candelis in 1212. After a brief look at the impact on Paris of the re-opening of the University of Oxford in 1214, it concludes with the landmark statutes established in 1215 by the papal legate and former master of theology, Robert of Courson. Gorochov takes great care to emphasize the universitaires involved in these events (such as enumerating on p. 307 every possible master who may have been among the boni viri consulted on the crafting of the 1215 statutes). In addition to an opening chapter giving a status report of the schools in the French capital around 1200, other chapters centre on the condemnation of Amaury (1200-1206), the actual birth of the universitas (1207-1209), the pontificate of Honorius III (1216-1227), the Great Dispersion of 1229 (1227-1231) and what Gorochov interprets as "the triumph of the regulars" (1231-1245). At each step, Gorochov interweaves a historical account, based on a thorough treatment of all documents pertaining to the university's development, with an impressively detailed report of the specific individuals involved at the university at each of these particular moments, culled from her painstaking search through an exhaustive array of both primary and secondary sources.

The extensive prosopographical detail makes this such a valuable study. Gorochov laudably includes all individuals for which there is some trace of participation at the university, not merely those who have left behind surviving texts. This allows for a penetrating look at how various geographical and social constituencies helped shape the university's early history. The dominance of members of the Italian and English nobility in the theological faculty during the critical years 1230-1250 is particularly interesting in this respect, especially when set against the backdrop of successful mendicant recruitment of noble students during this same period (see 500-501).

While the information supplied about the university's personnel will serve as an excellent resource, a few of Gorochov's findings about specific individuals are not beyond dispute. For instance, she expresses some ambivalence about whether or not Peter of Bar was actually a master of theology (438, 464). Yet she nowhere acknowledges that he is identified as a master in regard to his authorship of a group of theological questiones on the subject of evil found in Paris, BNF, Ms. lat. 14726, where it is unlikely that this title would refer to his arts degree. She also includes Odo of Châlons among the masters of theology during the 1230s without engaging Nicole Bériou's argument that the sole piece of evidence for this master refers instead to Odo of Châteauroux. [1] Gorochov also appears indecisive about whether or not William of Durham resumed his university career after the great dispersion from 1229-1231. On p. 419 she states that he returned to Paris after the strike while at p. 463 she merely suggests that it is possible that he may have returned. Admittedly, the evidence is not conclusive (and entirely dependent upon whether the questiones belonging to this master in Douai, BM, Ms. 434 must be dated after 1231). The judgment matters in this context, however, because she elsewhere concludes that there was only minimal interest in the writings of Aristotle among theology masters before 1229 (391). Because William of Durham is one of several masters from this period whose work exhibits familiarity with (and considerable enthusiasm for) the libri naturales, his fragmentary corpus offers key evidence for the Stagirite's more widespread popularity before the dispersion than Gorochov seems to allow. On another note, moreover, this reviewer also wonders whether explicitly ending the study with the arrival of Aquinas does not (even if inadvertently) reinforce the older Thomas-centred narrative of medieval intellectual history which has done so much to marginalize the generation on which this study has shed such important light.

Nevertheless, these minor quibbles do not significantly detract from the overall value of Gorochov's work. She has deftly integrated the institutional and intellectual histories of this monumental institution's early history, offering a meticulous analysis of a range of documents and helpfully synthesizing much of the available secondary literature. There remains a great deal of work to be done on the wealth of texts (both edited and unedited) authored by scholars at the early University of Paris. With this fine study, Gorochov has provided a durable foundation upon which all future studies can build.