Gabriele Cornelli: In Search of Pythagoreanism 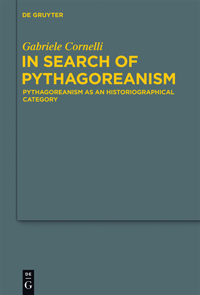 This book by Gabriele Cornelli, an Italian scholar working at the University of Brazilia, was originally written in Portuguese [1], then translated into English and published in Berlin. As such it can be seen as a sign of further widening and internationalization of the Pythagorean studies, to which process Cornelli contributed also by organizing and hosting an important Pythagorean conference in Brazilia and co-editing its materials. [2]

It might not be easy to properly estimate a book in relation to which one is at the same time a fish and an ichthyologist, but I will try to do my best. It is usual to complain about the difficulties of the Pythagorean question, but Cornelli is doing this masterly: "A sense of panic always seems to follow historian's encounter with labyrinthine Pythagorean doctrine" (8). Each interpretation of the Pythagorean material "is necessarily mediated by its author", so there are no two similar Pythagorases or Pythagoreanisms. As a new approach to the problem Cornelli suggests an analysis of the historiographical category of 'Pythagoreanism' in its diachronic and synchronic dimension (52). By this he does not mean an account of how different people used and understood the term 'Pythagoreanism' - this, an instructive problem in itself, is not dealt with in the book - but mainly an analysis of both ancient sources on Pythagoras and the Pythagoreans from Plato to the Neoplatonists and modern Pythagorean scholarship, from Zeller to Kingsley and a little beyond. In the traditional sense Cornelli's book is only partly historiographical, for most ancient writings he relies on do not belong to this category. But those which belong, such as, for example, Aristotle's doxographical passages or the Neoplatonic biographies of Pythagoras by Porphyry and Iamblichus, still determine contemporary approaches to Pythagoreanism, even though the term itself only appeared in the 19th century. In view of this continuity Cornelli's decision to consider this line as one tradition is quite justifiable.

Given the diversity of what falls under the label of Pythagoreanism, one feels uneasy that Cornelli does not give his definition(s) of the term. To be sure, he points out that "A successful historiographical approach must consciously allow us to describe the category of Pythagoreanism as constituted by an irreducible diversity", but how inclusive is his understanding of this phenomenon? For example, Carl Huffman provides four different definitions of Pythagoreanism in his entry in Stanford Encyclopaedia of Philosophy [3], which focus on the philosophy of Pythagoras, the Pythagoreans and Neopythagoreans, but leave aside their religion, science, medicine and politics. Cornelli rightly opposes a narrow philosophical approach, on the contrary, he insists that Pythagorean politics is very important for our understanding - not of Pythagoreanism, as I would expect, meaning by this term more or less everything that relates to Pythagorean things, - but of Pythagorean philosophy. Cornelli's criticism of Edwin Minar, Kurt von Fritz, Walter Burkert and others for separating political activity of the Pythagoreans from their philosophy would appear much more persuasive if he could have shown from the outset where the hidden connections between these two areas are.

The first chapter of the book deals with the history of Pythagorean scholarship in the last two centuries. Cornelli reasonably starts with Eduard Zeller, whose monumental Philosophy of the Greeks in its Historical Development eclipsed his predecessors to such an extent that we almost forgot their names. Meanwhile, when sometimes we criticise Zeller for his too sceptical approach to the post-classical sources (as Cornelli does), or for his too heavy reliance on Aristotle (as many do), we have to recall that his predecessor Eduard Röth accepted the entire ancient tradition on Pythagoras as historically reliable. [4] Being very enthusiastic about the Orient and comparative studies, Röth connected Pythagoreanism with China, Heraclitus with Persia, Eleatism with India, Empedocles with Egypt and Anaxagoras with the Jewish tradition. Is there any wonder that Zeller razed this construction to the ground?

One can only agree with Cornelli when he, citing André Laks, speaks of "de-Aristotelisation of the wrings on the origins of Greek philosophy" (37) as an important trend in the historiography of pre-Socratic philosophy after Harold Cherniss. But a complete de-Aristotelisation can by no means be our final goal, because in this case there is a high risk that Aristotle will be replaced by Iamblichus, as this already has happened due to Kingsley's "radical hermeneutic reversal" (47). A danger to find oneself in the pre-Zellerian times is all the more real as Kingsley does not yield to Röth in his passion for the Orient: in his new book the land of the Hyperboreans turns out to be Mongolia, the mythical Abaris becomes a shaman of the Mongolian tribe Avars, who initiated Pythagoras into the depth of Oriental spiritual tradition. [5]

Cornelli's overview of the most important Pythagorean studies is both interesting and useful, for example, his distinction between general handbooks on the history of Greek philosophy and monographs which reveal "complexities unknown to the former" (23). Among the things which need correction I would point out to the following. First, Cornelli introduces his own new category, 'Proto-Pythagoreanism', which refers roughly to the generation of Pythagoras himself. Now, in the historical periodisation the formant 'proto-' normally designates what precedes the phenomenon, as, for example 'Protorenaissance', coined by Jacob Burkhardt. In this sense, 'Proto-Pythagoreanism' is potentially misleading, for it implies Pythagoreanism before Pythagoras. Secondly, contrary to what Cornelli asserts, relying on a passage in my paper, Hermann Diels did not "organize his selection of fragments and testimonies on the Aristotelian-Zellerian premise that the Pythagoreans must speak of number" (14). My passage says that instead of the doctrinal criterion Diels used the historical approach and relied on Aristoxenus' catalogue of the Pythagoreans, most of which were politically active. Therefore, Diels can be seen as Cornelli's ally in his attempts to underline the importance of Pythagorean politics.

Chapter two continues this topic, partly answering to my earlier question about the definition, for here Cornelli comes to "the primary question for the historiography of Pythagoreanism: Who called themselves 'Pythagoreans'?" (55). He supports those scholars who believe that a Pythagorean cannot be identified by his adherence to a particular set of doctrines, the approach that I fully share, and suggests as the only viable criterion "a particular lifestyle treated by tradition as essential to the identity of a Pythagorean" (56-57). A Pythagorean way of life, described in Aristoxenus' book Περὶ τοῦ Πυθαγορικοῦ βίου (fr. 26-32 Wehrli) is undoubtedly a more historical phenomenon than Aristotle's all-Pythagorean number doctrine. Now, according to Aristoxenus, the Pythagoreans used medicine to purify the body and music to purify the soul (fr. 26); their diet was bread and honey (fr. 27); Pythagoras did not abstain from meat and beans, but only from plough oxen and rams, while being especially partial to sucking pigs and tender kids (fr. 28-29) - all this and many other things substantially differ from what most scholars take as the original bios Pythagorikos, based on dozens of prohibitions containing in the symbola. Different Pythagoreans of the same generation led different ways of life, so that we cannot identify one Pythagorean bios in the same way as it is impossible to find one Pythagorean teaching. Cornelli's conclusion that there were two currents within the Pythagorean movement, acousmatikoi and mathematikoi, follows attempts of the Neopythagorean biographers to solve the problem of at least two ways of life attested in the tradition available to them; the alleged schism between two currents contradicts Aristoxenus who said that the last Pythagoreans ἐφύλαξαν μὲν οὖν τὰ ἐξ ἀρχῆς ἤθη καὶ τὰ μαθήματα (fr. 18).

Chapter three, rich on material and discussion of the sources, examines the traditions of the immortality of the soul and its transmigration. Cornelli presents all important evidence on this account, starting with Xenophanes' satire on Pythagoras' metempsychosis (21 B 7 DK) and ending with much disputed Porphyry's passage (VP 19), the core of which he - along with Burkert but against Wehrli - attributes to Dicaearchus. Whether with or without Dicaearchus, there is no doubt that Pythagoras believed in metempsychosis. The problem arises when we come to the individual Pythagorean philosophers, since no one of them is directly connected with this belief, whereas some of them express quite different views on the soul incompatible with its immortality, for example, that it is a harmonia of the bodily elements or that it resides in the heart, as Philolaus believed. There are many different ways to reconcile these views with the alleged all-Pythagorean adherence to metempsychosis. It is also possible to abandon the very idea that all the Pythagoreans shared the belief in the immortality of the soul - and why should they, if Cornelli agrees that there was no common doctrinal basis among them? But in this case he considers this solution to be 'lectio facilior' (93) and prefers the other one: since the Pythagorean lifestyle depended very much on metempsychosis and membership depended on the life style, "it would be very difficult to identify Philolaus as a Pythagorean unless he himself professed that theory" (93). Lectio difficilior was suggested by Guthrie: Philolaus had two different theories on the soul, one religious and one philosophical. This is possible, for Empedocles seemed to have two. There is, however, an additional difficulty to this solution: it implies that all individual Pythagorean of whose views on the soul we know about - Alcmaeon, Hippasus, Hippon, Philolaus, Echecrates, Ecphantus, etc - also had two different theories of the soul, one philosophical, which is attested, and the other religious, which is not. Why metempsychosis is both so central and so elusive? Before these questions are satisfactorily answered the tendency to choose lectio facilior would be hard to suppress.

Chapter four does not so much focus on Pythagorean mathematics (as was promised at the beginning) as on number philosophy of this school as presented by Aristotle. The unique position of Aristotle as the principal witness to and interpreter of Pythagorean number doctrine allows Cornelli to effectively demonstrate, what is meant by Pythagoreanism as the historiographical category. Being the founder of the history of philosophy, Aristotle had to find a common conceptual carcass for many different Pythagorean philosophies and the motto "all is number" became in fact his "solution to a historiographical problem" (149), which he dealt with at the beginning of his Metaphysics. In Aristotle's scheme of philosophy's development the Pythagoreans played the role of "a foil for the Platonic doctrines he wished to critique" (161), as Cornelli aptly formulates. Thus, Aristotle constructed a core of what in the 19th century became Pythagoreanism. But to what extent does Pythagorean number doctrine known from Aristotle reflect genuine Pythagorean theories? For a long time the most passing candidate here was Philolaus; Cornelli exploits in detail various sides of the Philolaic problem and comes to the conclusion that "Aristotle's testimony about the 'so-called Pythagoreans' coincides in several places with Philolaus' book" (187).

If some of the interesting methodological reflections which are set forth in the Conclusion were formulated in the Introduction this would have made clear the author's theoretical presuppositions from the very beginning. The book is vividly written and will be welcomed as a useful introduction to the Pythagorean question.

[5] Peter Kingsley: A Story Waiting to Pierce You. Mongolia, Tibet and the Destiny of the Western World, Inverness 2010.