Attilio Mastrocinque: Bona Dea and the Cults of Roman Women 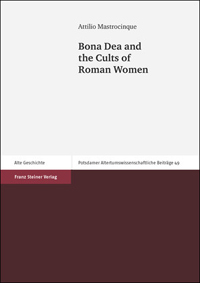 Recently, Attilio Mastrocinque has produced a new study that attempts to explain the enigmatic Bona Dea in light of Roman rituals and myths concerning marriage. This is a fascinating line of inquiry that calls upon us to reassess our understanding of the Roman concepts of gender, marriage, and divinity. Yet, the author never delivers his promised "method." Rather, he only demonstrates his willingness to connect the worship of the Bona Dea to any and every feature of the worship of other deities ranging from Bacchus to Faunus to Hercules.

There are nine parts to the book. After a brief Preface (I) outlining the history of the project, the Introduction (II) summarizes the very broad parameters of the book (13): "This work will deal with [...] premarital relations between the bride and gods." The author wishes to demonstrate that "ritual and imaginary forms of sexual union or love affairs with a god were thought to be necessary and beneficial for the bride."

The first full chapter (III) is entitled "Girls and Pagan Gods." This chapter collects evidence for sexual encounters between gods and unmarried girls. The author then attempts to demonstrate that the Romans conceived of "virginity" as a cultic state preceding the touch of a fertilizing god, rather than a biological state in which the hymen is intact. The chapter ends with a collection of testimonia that a god enjoyed the right of the first night with new Roman brides.

The next chapter (IV) is cryptically entitled "Wedding Invitation." This chapter's discursiveness makes summary difficult, but the general upshot is that it gathers a survey of ancient literary testimonia to the Bona Dea's exclusively female December rite along with both artistic and literary depictions of Dionysus' marriage to Ariadne. The author arranges these passages in such a way as to suggest a connection between Dionysus and Bona Dea.

The next chapter (V) is entitled "Initiations and Political Power." Here, the author attempts to show that the Bona Dea ritual affirmed the status of Roman noblewomen, a proposition that is on the whole quite reasonable. However, the author does not see that this aspect of the festival does not harmonize well with his overall thesis that Bona Dea is a goddess of the transition to marriage. Our evidence tells us that the festival was attended by 1) aristocratic matrons, 2) some of their female slaves as performers, and 3) the Vestal virgins. Why should any of these people have reason to celebrate annually a goddess who presides over the transition from virginity to marriage?

The chapter entitled "Omphale" (VI) is another lengthy one that defies easy summary. The author attempts to buttress his argument that Omphale officiated the December rite of Bona Dea by discussing the roles of Omphale's counterpart, Hercules, in Roman religious life. In short, Hercules is a god who forces himself sexually on women and fertilizes them. This function as a fertility god is meant to extend to Bona Dea's festival, since the author believes that it is officiated by a woman playing the part of Omphale.

The next chapter (VII) is entitled "The Reign of Bacchus." In this brief chapter, the author attempts to make the god Liber the paradigm of the Roman groom, and Libera that of the Roman bride. He sums up the thesis as follows (135): "Bona Dea was a goddess who transformed Roman girls from daughters into brides, while Libera was the bride [...]. The secret ceremonies of Bona Dea prepared for the arrival of the husband, and Faunus was supposed to bless the bride before she was handed over to the groom."

The next chapter (VIII) is entitled "Divine Daughters and Wives." It attempts to contextualize the author's view of rituals surrounding the transition from girlhood to womanhood. For example, he sees the goddess Anna Perenna as a protector of virginity, based on an obscure and controversial couplet in Martial (4.64.16-17), and as a goddess of marriage, based on Ovid's claim (Fasti 3.523-96) that at Anna's festival the plebs drink and "each reclines near his woman." In this way, he designates Anna as a goddess who presides over the transition from virginity to marriage. The chapter ends with a list of supposedly comparable figures, e.g. the Etruscan Cavatha and the Lavinian Minerva Tritonia.

The final chapter (IX) is entitled "Opposition and Complementarity" and sums up the author's conclusions. He quite reasonably calls for a new scholarly interest in the rituals of initiation that surrounded the Roman citizen's life, and also calls on scholars to treat female initiation on its own terms, and not as "of minor importance and copied [from] male initiations (191)." However, the author has not fully heeded his own call. In the best-attested all-female ritual of ancient Rome, he would have us see males like Faunus intrude everywhere.

The author rightly notes that ancient conceptual frameworks are different from those of modern western societies, and that this disconnect can render us "deaf or blind" (14) to realities that were perfectly obvious to ancient authors. Yet, he uses this disconnect to justify wild speculation. For example, he uses his discussion of Hercules to advance the following theory about Clodius' infamous desecration of Bona Dea's festival in 62 BCE: Clodius dressed as a woman in order to play the part of Hercules in recognition of the marriage of Clodius' sister to Pompey the Younger. If this was Clodius' intent, he did a very poor job of communicating it since no ancient source even hints at this possibility.

Imagination is one parent to new discovery, but rigor is the other parent. We need to use our imagination in order to exceed the boundaries of what we think we know, but then it is equally necessary to test our insights carefully and thoroughly against all available data. For example, the author's argument that the mysterious god Tutunus claimed the ius primae noctis of new Roman brides when said brides sat on a phallus seems to me persuasive.

Casual conflations abound in this work, and they damage the value of almost any argument advanced. Throughout, the necessary judgment of relevant distinctions is lacking; all sources, whether Ovid or Varro or Propertius or Macrobius or a sarcophagus relief, are treated as the same kind of evidence.

Worse still, the author privileges one piece of evidence only because it fits his thesis. He affirms repeatedly that Bona Dea is Fauna, the wife and/or daughter of Faunus, while other identifications were "only erudite speculations" (129). Yet, our sources for the identification of Bona Dea with Fauna are Lactantius and Macrobius, who both probably rely upon Varro. Why should we understand the identification with Fauna as uniquely meaningful, and not just another "erudite speculation"? The author does not say.

The major problem of this book is its far-fetched conjectures based on tenuous evidence. However, there is one major error of fact. The author uses the Bacchanalia scandal of 186 BCE to support his view that Bacchus/Liber was a god of women. He claims that the scandal "occurred because of new Greek influences on female cults (127)." A bit later (136) he states, "Bacchanalia was the generic name of many rituals performed by women. The intrusion of men was forbidden." That the suppressed Bacchanal associations were not exclusively female cults is shown by all our best evidence and is widely accepted in contemporary scholarship. [1]

This book is poorly organized. Paragraphs often do not follow from one another with any explicit coherence. Even within paragraphs sentences do not always follow from one another with any discernible topic in mind. Sometimes the author seems to give up altogether on connecting ideas, and instead contents himself with one-sentence paragraphs. In one particularly noteworthy example, three one-sentence paragraphs appear in a row. Block quotes are often far too long, and include material that is extraneous to the author's point.

There are many infelicities of English mechanics, usage, and style throughout this book. In one notable example, the author (15) lists "transvestism, disguisement, metamorphose" as features of relevant rituals. The author uses the Latin Thebœ (with the ligature) instead of the English "Thebes" and the Italian "Cupidon" instead of English "Cupid." These small editorial matters occur with enough frequency to prove very distracting.

Despite all these criticisms, I do believe that the author has an interesting and possibly important project on his hands. The model that Mastrocinque proposes suggests the possibility of levels of initiation into marriage and Roman womanhood, and such a framework of initiation may help to make sense of the many seemingly bizarre rituals that are attested for Roman weddings. As it stands, though, this book was not ready for publication.