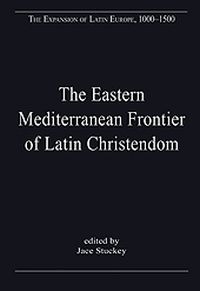 Ashgate, publisher of the well-known Variorum Collected Studies Series, is now employing the same method with collections of papers from many authors covering a broad topic. Ashgate has three series in which the editors choose from existing literature, seek permission from authors and copyright holders, and introduce, index, and submit the already formatted material for printing and binding. In the series The Expansion of Latin Europe, 1000-1500, designed to contain thirteen volumes in three parts, Jace Stuckey's The Eastern Mediterranean Frontier of Latin Christendom is volume 6. Stuckey has chosen 22 papers by 20 authors, dividing the volume into six parts: (1) "Travel, Trade, and Economy", (2) "Migration and Colonization", (3) "The Crusades and the Christian East", (4) "Military Orders", (5) "Cross-Cultural Encounters", and (6) "Trade and Crusade".

Stuckey admits (xxviii) that the volume is "woefully incomplete" and does not do justice to the scholarship of "the last half century", but asserts that it tries "to offer a representative sampling of the work of leading scholars" and will "further research". The mean date of publication for the 22 papers is 1992, and only two papers in the collection are less than 15 years old. Thus we have a snapshot of the top scholarship in the early 1990s, which limits the volume's utility as a springboard for further research.

Most of the papers are by leading scholars in the field, those of Michel Balard (2), John H. Pryor, David Jacoby (2), Bernard Hamilton, A[lan] J. Forey, D[avid] M. Metcalf, Joshua Prawer, Michael Brett, Robert Irwin, Alan V. Murray, Hans Eberhard Mayer, David Abulafia, and Sophia Menache. These are good papers, but a couple do not belong here. Forey's "The Emergence of the Military Order in the Twelfth Century" (ch. 12) is too narrow and elevated for most readers, including about 100 lines of Latin in the text, more than half in small print. Prawer's "Military Orders and Crusader Politics in the Second Half of the XIIIth Century" (ch. 14) is a bit outdated (1980) for such a controversial topic (and it was apparently never revised by a native English speaker).

Of the other chapters by specialists, Michael E. Martin's "The Venetians in the Black Sea" (ch. 4) retains its unpolished oral character - e.g., "your present speaker" (63) - and contains an excessive number of typographical errors, many punctuation problems, and four completely garbled Russian citations (all of which could have been fixed), which do not inspire confidence. Monique Amouroux's "Colonization and the Creation of Hospitals: The Eastern Extension of Western Hospitality in the Eleventh and Twelfth Centuries" (ch. 11), with some incomplete references, still exhibits some Gallicisms from the French original, and the first three lines have been botched badly. Christopher MacEvitt's "The Chronicle of Matthew of Edessa" (ch. 10) is an interesting revisionist view of the early 12th-century writer, but historical circumstances are only a second priority. In a volume such as this, it would be better to have a history of the Armenians 1000-1130, leading up to (and not following) Hamilton's paper on the Armenian Church.

The focus of the volume is squarely on the period before 1291 and on the crusades and Crusader States. As an historian specializing in Frankish Greece and Cyprus, I was curious about how these areas would be covered, since they constituted the Latin frontier for more than 50% of the time (1291-1500) covered by the series in which there was a Latin frontier in the Eastern Mediterranean, 1095-1500. Frankish Greece is discussed in only one chapter, and Cyprus is likewise covered in one paper, although there are chapters on the Black Sea and the Aegean. The Greek Church is barely mentioned in the book, despite the fact that on the first page of the introduction (xvii) Stuckey remarks anachronistically that "[t]here was a growing divide between the Orthodox and Catholic faiths that would culminate in the eleventh century with the Great Schism and mutual condemnations and excommunications from both sides."

The Cypriot chapter is Sidney M. Greenfield's "Cyprus and the Beginnings of Modern Sugar Cane Plantations and Plantation Slavery" (ch. 7), from a Spanish conference proceedings published in 1991. Greenfield is an anthropologist specializing in Latin America. This paper retains much of its original oral nature, was not proofread carefully, relies almost exclusively on secondary literature, uses these sources indiscriminately, displays a lack of familiarity with the geology of Cyprus, abounds with non sequiturs, contradictions, and erroneous claims (Eleanor of Aquitaine went with her son on crusade, the Knights of St John and the Hospitallers are two different orders, etc.), and perpetuates popular myths that scholars have been trying to dispel for decades. Even when discussing sugar plantations in Cyprus the article exhibits the same shortcomings: there is no evidence for sugar cultivation on Cyprus in the seventh century, and according to the leading authority on slavery on Cyprus, Benjamin Arbel, it is "doubtful" that Cyprus can be characterized as a "large-scale slave society" (quoting Orlando Patterson), because the evidence we have suggests that slaves never made up a substantial proportion of the population, probably not even in the small area where sugar was cultivated. In any case, there is no direct link between agricultural slavery on Cyprus and the plantation economy of the New World, pace Greenfield. Arbel's classic "Slave Trade and Slave Labor in Frankish Cyprus (1191-1571)", from 1993, would have been a better choice.

Two other chapters are problematic in a different way. The controversial Arabologist Philip Khuri Hitti's 7-page "The Impact of the Crusades on Eastern Christianity" (ch. 8) is what one would expect from this passionate scholar writing in 1972. Stuckey claims that Wadi' Z. Haddad "analyzes an incredible range of works" in his "The Crusaders through Muslim Eyes" (ch. 17) from 1983, but Haddad looks at only five authors, focusing on just two, and employs a mere three secondary sources, two of them general works, none on the Crusades. It is a collection of anecdotes presented without critical analysis and apparently accepted at face value. After Haddad offers those of al-Qarāfī, we are told that "al-Qarāfī demonstrated a thorough knowledge of Christian (and Jewish) scripture, creed, rites, ritual, theology and polemics, on the one hand, and of customs, laws, religious practice and the militancy of the Crusaders, on the other" (335): How does Haddad know this, if he makes no attempt to evaluate these stories? Haddad then contradicts himself anyway in his conclusion: "the material does not show an intimate knowledge of the Crusaders" (337).

Lastly, "An Economic Interpretation of the Medieval Crusades" (ch. 21), by economists Gary M. Anderson, Robert B. Ekelund, Jr., Robert F. Hébert (misspelled as "Herbert", except in running titles) and Robert D. Tollison: using no primary sources, not worrying much about factual accuracy, picking and choosing quotations from secondary works of varying quality, "we attempt to show that a simple wealth-maximizing model of the crusades - one that assumes that they were motivated by pure profit-seeking on the part of the individuals within and outside the church - has impressive explanatory power" (397). One could just as easily assume that the ultimate motivation was sexual, giving a Freudian interpretation of the typographical error in Stuckey's description of the authors' use of "pubic choice analysis" (xxvii). The following passage, introducing a quotation, with the authors' comment inserted, should suffice to give an idea of their views (411): "Furthermore, the pope argued that allowing knights to rape and pillage infidels in the Holy Land would produce the side-benefit of reducing rape and pillage against fellow Christians in Europe: 'Urban seemed to believe that the French needed Lebensraum for colonization [note that a similar argument was a central tenet of Hitler's reasoning for invading Eastern Europe]'".

Considering the editor's freedom in creating this volume, the result certainly could have been better.