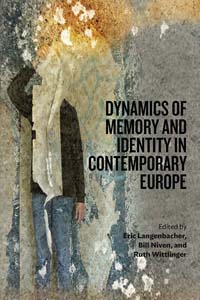 The fact that memory is neither reducible to what individuals remember of past events, nor to what historians, politicians, intellectuals wish to record is now a very well-known fact. Indeed, the huge expansion of memory studies in recent years has brought with it an ever more complex understanding of how memories are formed, transformed and transmitted and an acute awareness of the need for interdisciplinary approaches. However few volumes address this twofold - ontological and epistemological - diversity. Considering various challenges to finding out about "memory" - the object of study - and analysing the consequences of how the past is instrumentalised in practice, this is what the collective volume Dynamics of Memory and Identity in Contemporary Europe, the result of the collaboration of two political scientists (Ruth Wittlinger and Erich Langenbacher) and one historian (Bill Niven) sets out to achieve.

Although it deals with memory, identity and Europe, this volume differs from existing collections of articles on the subject of European memory in two fundamental ways. [1] Firstly, while it highlights the interdependence of identity and memory, it does not assume, but self-critically problematizes, the existence of both a European identity and a European memory as such (see the contributions of Christian Gudehus, Hans-Joachim Hahn and Mark Wagstaff in particular). Different uses of the terms Europeanisation and European are also brought to the fore (see Anna di Lellio on different interpretations of the battle of Kosovo in 1389 and Ljiljana Radonic on Croatian memory politics). And although the Second World War looms large, as a shared European experience, contributions point to the necessity to go beyond this event to understand the present (see e.g. Ruth Wittlinger on contemporary Germany). Indeed, despite the background of the three editors in German studies, the contributions span the whole of Europe, from Scandinavia to Russia (even if not a single reference is made to Britain). Many contributions highlight similarities between different national contexts; some directly challenge the assumption of key differences between East and West (see Bill Niven). But it is the transnational character of the contributions and the research and not a specific delimitation of their content in geographical or cultural terms that constitutes what is European.

Secondly, although the volume refers to some known insights about memory's nature as an object of scholarly enquiry, it does not propose a specific theoretical framework. The concise and carefully written introduction, despite carrying the same title as the volume as a whole, does not impose a particular theoretical direction. In fact, it appears that the word "dynamics" is supposed to capture the diversity of the phenomenon at hand theoretically and its practical manifestations. One can read that, "[c]onsidering the relevance of the past in any construction of identity, the dynamics of memory in the new Europe are crucial to an understanding of the relationship between its people" (2). [2] The different contributions are more or less empirical or theoretical and diverse in their approach to memory as a concept. They range from a gender perspective on family narratives (Helle Bjerg and Claudia Lenz) to a comparison of sites of memorialisation (see e.g. Madelon de Keizer on Nazi sites of terror across Europe, Henning Meyer on French resistance museums and Anna Di Lellio on the site of the battle of Kosovo) or the consideration of memory as a data producing market (Mark Wolfgram). The style of writing is essayistic and the arguments often tentative and exploratory. Many authors make reference to very recent events such as the effects of the economic crisis of 2008 or projects of which the outcomes remain to be seen. They seem to probe how far the memory argument can be taken in their given area and draw conclusions on that basis about European identity.

Herein lays, however, the weakness of the volume as well. Memory and identity are open to such broad interpretation that in some cases they are equated and one could argue not all contributors are actually discussing the same thing. To mention just a few of the terms used for memory, it is a matter of history, collective memory, cultural memory, historical consciousness, national memory, imagination, national imaginary (44), national historiography (79), discourses of the past (44), history culture (53), narrative modes (71), meta-narrativity (79) shared cultural norms of behaviour (108), lieux de mémoire; the processes observed are described as collective memory formation, commemoration, ritual, memorialization, national rehabilitation, suppression, leisure, self-critical memory; the actors are individuals, memory-entrepreneurs, politicians, governments; the sources range from oral history interviews to museums. What is missing is a more thorough conceptualisation of whether what is at stake is the past as part of individual self-perceptions, contemporary political culture or elite aspirations; and if it is all at once, then what is the relationship between the different elements? Similarly, as Erich Langenbacher indicates in his conclusion, the volume reveals, not the existence of a Holocaust-centred European memory often proclaimed, but the tension between hegemonic and particularist trends in Europe. But the questions what is memory and what is European memory in particular remain largely unresolved.

Yet perhaps the aim of the volume was to trigger this kind of questioning. While specific contributions may be of interest to experts on a given topic, this volume is best read in its diverse whole. In fact, it should be required reading for anyone who purports to study European identity today. The volume highlights the significance of the past for identity, but also the fact that we have reached a double turning point: On the one hand, with regard to the study of memory, one wonders whether memory as a concept can survive this endless diversification and stretching. On the other hand, with regard to European identity, the Second World War no longer plays the role that it did in the post-war era when those who remembered it were still alive and its interpretation was highly contested, or even the only contest. Does this book mark the end of European memory? This is not the argument as there is no suggestion such a thing ever existed before. But if nothing else, it warns against searching for it by usefully pointing to the constant changes to our tools and object.

[2] This is different to other studies of the "dynamics of collective memory", which remain purely theoretical. See e.g. Iwona Irwin-Zarecka: Frames of Remembrance: The Dynamics of Collective Memory, New Brunswick, NJ 1994.