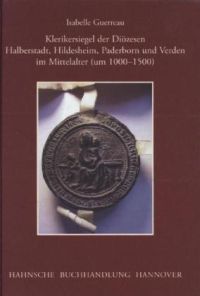 In Isabelle Guerreau's monograph, seals of the medieval clergy are the subject of an unprecedented amount of concentrated examination. Originating in a doctoral dissertation (2006) prepared for the École pratique des hautes études and the University of Göttingen on ecclesiastical seals produced in Saxon bishoprics, the present monograph rests upon a corpus of some 860 personal seals of members of the secular clergy (bishops, provosts and deans of chapters, cathedral and collegial canons, curates and vicars), and of the regular clergy (abbots and abbesses, monastic officials, and monks and (very rarely) nuns). Corporate seals of chapters, seals for business (ad causas) and seals of officialités (episcopal courts) are included in the corpus though only slightly analyzed in the monograph; those of military orders have been excluded altogether.

The corpus, available on a CD-Rom, is a precious resource, providing ready access to illustrations and descriptions. Each seal entry includes a photo, a thorough description: shape, size, iconographic devices and physical marks, legend and graphic signs, modes of attachment, color of the wax, the associated record's date, location and call number, and, where appropriate, a detailed listing of additional imprints issued from the same matrix. The corpus is not, however, an exhaustive catalog of all ecclesiastical Saxon seals from the time of their appearance in the late ninth century until 1500. Rather, it serves as an extensive representative sampling from which to test the hypotheses, and indeed reach the conclusions that, though no portraits as such, these seals articulated self-representations of their ecclesiastical owners; that the graphic and iconographic content of these seals resulted from personal choices of their owners; and that the choices made paralleled the sealers' hierarchical status within the church.

Guerreau's manifest commitment to the notion of choice as determinative for the representational and hierarchical nature of medieval seals has guided her particular method of analysis. Of the 860 seals catalogued in the corpus, about twenty two are extant as seal-matrices while the others are primarily known as impressions still attached to documents. It is relatively rare, in this corpus, for a seal to be known from more than one impression. Guerreau's consideration of sealing practice focuses less upon the use of seals to authorize documents than on the production and personal ownership of the seal matrix since, she notes, the actual choices of seal design and text (legend) occurred at the time of the engraving of the matrix.

The author's decision to consider sealing practice primarily from the perspective of seal engraving and ownership has several consequences. Firstly, the 860 entries of the corpus describe seals each issued from a different matrix. Secondly, each seal has been dated insofar as possible to the date when their owners initially assumed their function. Thirdly, the focus on (the majority of no longer extant) seal matrices has entailed some distancing from the actual practice of documentary sealing in Lower Saxony. Given the author's remarkably extensive archival research, one might have wished for citation of documentary clauses announcing the apposition of signs of validation, which often contain valuable information about the medieval perception of seals and sealing. More also might have been cited about the specific circumstances in which Saxon ecclesiastics sealed; but the discussion of the relationship between sealing and writing is, however, general, having been culled primarily from secondary sources, and from published acta that contain lay as well as ecclesiastical charters. Finally, Guerreau's emphasis on seal matrices and on the essential concern of owners in their making is in some tension with her other notion that seal impressions may be conceived as recording further individual choices, involving the color of wax, methods of attachments, and the display of fingerprints.

Guerreau's methodological approach to Saxon ecclesiastical seals strongly suggests her belief that every component of a seal meaningfully results from that seal's particular situation within a larger structural system, from interaction between that seal's features and those of other seals in the system. For Guerreau, the system is the clergy and its hierarchical categories, which she treats as binaries (secular/regular, male/female) or as polarities (higher clergy/minor clergy, although she acknowledges that a clear line separating such categories cannot always be clearly drawn). She considers that the structure of the seal is composed of its constitutive elements, principally the anthropomorphic figure, sacred persons, architectural motives, and family names, but also size, shape, etc. so that the seal is broken down in considerable detail. Such variables, whether socio-hierarchical or icono-representational, are then considered to be independent devices whose various interactions are to be tracked separately and chronologically.

In chapter 3, every particular component of the seal is minutely paired with each ecclesiastical category. Chapter 4 reverses the order, and each ecclesiastical category is paired with every seal's component, which results in a considerable reiteration. In treating this large amount of particularized information, Guerreau has resorted to numerous graphs and statistical tables. Quantification certainly has proved useful in highlighting trends for the sociology, chronology, iconography, and epigraphy of seals. However, such a systematic recourse to statistics has obliged Guerreau to confront the fact that many seals resist statistical categorization, and that lists of exceptions often outweigh statistical correlations. Nevertheless the author has developed a significant argument: until 1230, when only bishops, abbots, abbesses, and chapters' officials owned seals, these were imbued with their owners' authority; they regularly displayed the figure of an ecclesiastic bearing the titles and clad with emblems of spiritual and liturgical function; corporeal depictions personified the essence of spiritual leadership while architectural motives evoked the universal scope of ecclesia.

As the sociology of seal ownership diversified after 1230, so did seal appearances. New representational devices appeared which referred to kin (heraldry, family names), and to community, institution, and locale (saints). On seals of the lesser clergy, iconography increasingly displayed secular and personal rather than ecclesiastical functional markers. On one hand, Guerreau asserts that such personalization sought to compensate for inferior status, indicating also that, in spreading to lesser individuals, seals lost power and meaning; alternatively, one might infer that seals had acquired a newer meaning, for example relating to the actual circumstances of their utilization. On the other hand, Guerreau demonstrates clearly that innovations in seal graphic and iconographic formulas originated from the lower ranks of the clergy, and were later imported onto the more conservative seals of episcopal dignity as young clerics became bishops. Throughout, the author argues that, underlying the process wherein some aspects of the seal remained common to all sealers, there was always a correspondence between the composition of seals and the function of sealers, and between the ecclesiastical hierarchy and the organizing principles of distinction upon seals.

In order fully to appreciate the import of this argument, one must understand that Guerreau is striving to read seals beyond their stereotypical appearance. Of course, she acknowledges that representation on seals has a normative dimension, but she avers that the normative motif is only one aspect of the seal's structure, and that it was the particular integration of this central image within a seal's multiple components that gave seals their true significance as self-representational tools.

Guerreau has accumulated an enormous amount of data. While she has chosen to limit her analysis to self- and social representation, she has also briefly considered operations suggesting different contexts for the interpretation of seals: seals bore intentionally applied fingerprints; seal matrices were re-used and shared; seal iconography dialogued with local artistic motifs; antique gems served as seals; their hagiographic motifs place seals within a devotional sphere. Perhaps the most prominent among these promising leads comes from an exceptionally interesting annex, in which Guerreau provides her edition of medieval texts (vidimus) in which seals are described. These texts situate seal iconography within the larger semantic sphere of the medieval imago, a topic addressed substantially by English scholarship on seals. Her predominant reliance on French and German sigillographic studies may have hampered Guerreau's access to this question.

Guerreau's monograph fills significant gaps. Seals of the lay elites and of the central Middle Ages have received most attention, and German seals are not as extensively cataloged as seals from other countries. In highlighting the specificities of ecclesiastical sealing in north Germany, Guerreau reminds us that the early beginning of documentary sealing by Saxon bishops occurred at least a century before that of their colleagues in neighboring France, England, and Spain. In these latter countries, notaries and jurisdictional seals contributed to the displacement of personal seals during the late thirteenth century so that by the early fifteenth century, ownership of personal seals in these lands was rare beyond the ranks of elites. Less so in Germany and therefore, while extending our knowledge of seals in a particular time and place, Guerreau seriously ponders and systematically considers the representational strategy of seals in their relationship to personhood, social hierarchy, and the self.