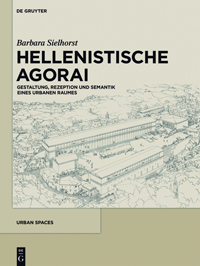 Recent years have seen a renewed interest in ancient public space among historians and archaeologists. Much of this work, like this reworking of Sielhorst's (2011) PhD thesis, has been influenced by the realization of the so-called spatial turn that society both shapes and is in turn shaped by the spaces it uses. Investigating public space seems to offer possibilities for arriving at new understandings of life in the ancient city. This book promises to take a systematic and theoretically informed approach to analyze the changing layout and function of the Greek agora from about 400 BC to 50 AD. Sixteen agora sites, from Greece and Asia Minor, are discussed in detail and fifty more are drawn upon to flesh out the discussion. The book asks important questions and suggests some interesting answers but suffers from a lack of critical engagement with both previous scholarship and, more problematically, with the evidence.

The introduction (Chapter 1) provides an overview of previous agora scholarship and sets out Sielhorst's aim to challenge Roland Martin's vision of post-Classical decline, as argued in his seminal 1951 study, by drawing on tools of cultural semiotics, reception theory and architectural sociology. The following two chapters take a comparative approach to explore what this new method can tell us about the Hellenistic agora. Chapter 2 looks at the layout, function, reception-aesthetic and meaning of the agora. Chapter 3 examines the organization of the agora as a social phenomenon. Chapter 4 consists of detailed considerations of each of the sixteen case studies. Chapter 5 is again comparative and explores the relationship between the form, function, topography and layout of agoras. A summary of the main conclusions is given in Chapter 6. Chapter 7 casts a brief look ahead to the development of the agora in Roman times. Summaries in French and English are provide in chapters 8 and 9. The book concludes with a site gazetteer with summaries of research history, chronological development and extensive bibliographies. The book could have been more tightly organized. There is a lot of repetition and readers will be better equipped to judge the arguments in chapters 2 and 3 if they read chapter 4 first.

Sielhorst identifies several key trends in agora development in Hellenistic times, most notably: (i) a greater degree of architectural definition and more deliberate channeling of movement (ii) political buildings and administrative buildings becoming obscured by stoas and (iii) increasing numbers of statues which made representation one of the agora's main functions. These developments are convincing but Sielhorst's reading of their significance is sometimes problematic. Her argument that shielding political offices behind stoas meant that they had "no meaning" for the agora begs the question why these buildings remained attached to the agora at all. Why didn't politicians hold their meetings in private houses? She stresses that the open space of the agora was no longer used for assemblies but provides no evidence either that this was the case or that assemblies had been common on agoras in earlier periods. Her assumption that specialized market buildings are evidence that no trade took place on more civic agoras is also unsubstantiated. And with so little public life taking place on the agora we might wonder who the audience for all the new political monuments was. Sielhorst argues emphatically against the idea that Hellenistic agoras became like museums but her agora, as a space where representation was more important than daily life, is far closer to Martin's vision of decline than she suggests.

The new method promised in the introduction turns out to involve drawing inferences from reconstructed plans of agora sites. Theoretical literature is mentioned but with no discussion of how such work leads to new insights. There is little critical reflection on the evidence on which reconstructed plans are based. Sielhorst's certainty in referring to buildings such as the Prytaneion at Thasos, or the Bouleuterion at Kassope, or in stating that the 2nd century South Square at Athens combined market and administrative functions is entirely misplaced. The function of these, and many other buildings mentioned, is unclear and the subject of debate. Her view that the Tholos at Athens was the city's Prytaneion is simply incorrect. The Tholos was known as the Prytanikon but the Prytaneion stood elsewhere in the city. A reader wishing to check the evidence that underlies Sielhorst's interpretations is poorly served by the sporadic references to points of detail in the footnotes and would have to browse through the titles on the individual site bibliographies one by one. For the most part, Sielhorst's interpretations are plausible enough but it is problematic that the reader is forced to take them on trust.

The neglect of textual evidence, in particular, throughout the work is a serious shortcoming. A page length section in Chapter 3 purports to deal with this subject. Here Sielhorst tells us that Aeneas Tacitus, Apollonios Rhodios, Strabo and Heracleides Creticus say things about the increasing importance of the appearance of urban space that support her view of the agora. But she provides just a single reference to the last-named author in a footnote and cites two pieces of modern scholarship on Hellenistic urban aesthetics. Inscriptions receive even less attention. Full analysis of the literary and epigraphic material was beyond the scope of the book but even a primarily archaeological study should treat this evidence more seriously than this.

Engagement with modern scholarship is uneven. Debates about the nature of Hellenistic culture and society might have informed both the questions Sielhorst asks of the agora and the interpretations of her site plans. Instead she presents her interpretations as self-evident and only briefly considers work on other aspects of the period, such as other areas of public space or Hellenistic art, to assess where it reinforces her interpretations. German scholarship receives more attention than that in other languages. This is understandable but the fact that this is as true of scholarship on individual sites as it is for more general work sometimes creates a misleading impression. For instance, consulting the site bibliography on the Athenian Agora one would think that the only important articles to have appeared since the early 1990s were in German, which is very strange for a site that has mainly been worked on by Anglophone scholars.

The book includes 169 illustrations. All except for a map of locations of the sixty-six sites discussed are reconstructed ground plans of agoras and cities. Photographs of landscapes or remains could have illustrated Sielhorst's arguments about the relationship between agoras and their surroundings or supported interpretations of the date and function of buildings. 3D reconstructions could have demonstrated the visual impact of particular structures. Plans of excavated remains could have shown what archaeologists have actually discovered. Such illustrations are sadly not included because the reconstructed site plan is taken to be the most important tool for understanding ancient public space.

The text finally contains a few too many errors. The discussion of the Monument of the Eponymous Heroes at Athens (85 and 222) confuses both how many times the monument was extended in Hellenistic times (once and not four) and when Demetrios Poliorketes' statue was added (in 307/6 and not in 224/3). We are told that a racetrack has been excavated on the agora of Sparta (33) when that agora has still not been discovered. The catalogue entry for Pella states that the agora was still in use in the 3rd century AD, when it was destroyed in an earthquake in the late 1st Century BC. The entry for Sikyon says that its agora went out of use around 140/50 BC when Pausanias describes the square as still in use in the 2nd century AD. Sielhorst's repeated invocation of the statues of Gaius and Lucius Caesar on the agora of Thasos as rare examples of statues erected in the central space of an agora is also odd when those monuments were, as the catalogue entry states, set up near the much older statue of the athlete Theagenes. Such mistakes are unfortunate because the book will no doubt be used as a reference work by those looking for an accurate and up-to-date overview of agora scholarship.

In sum, it is useful that so many agora sites are discussed in conjunction and the book identifies worthwhile lines of enquiry. However, the methodology used to pursue them is less innovative and rigorous than promised and the conclusions do not substantially challenge established views about the Hellenistic agora. Sielhorst has many interesting suggestions for how agoras should be interpreted but these need to be explored more thoroughly to become fully convincing.