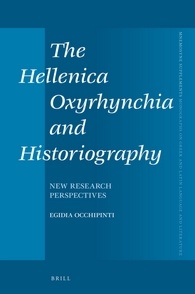 The Hellenica Oxyrhynchia have never stopped attracting the attention of ancient historians, since the discovery in 1906 of the London Papyrus (P.Oxy. V 842). Since then, two new long fragments have been published (PSI XIII 1304 and Cairo 26 6 SR 3049, 27 1), and further papyri have been tentatively assigned to this text; at the same time, important historical commentaries appeared, until the recent comprehensive studies by Bruno Bleckmann (Fiktion als Geschichte, Göttingen 2006) and Roberto Lérida Lafarga (Comentario histórico de las Helénicas de Oxirrinco, Zaragoza 2007). Egidia Occhipinti is currently working with Gianluca Cuniberti at a new critical edition with commentary of the Hellenica Oxyrhynchia: her The Hellenica Oxyrhynchia and Historiography: New Research Perspectives (Leiden / Boston 2016) presents the first results of this current research, with methodological innovations and new observations on the text and its contents.

As explained in the first chapter on the state of the art, the books offers a series of surveys in the Hellenica Oxyrhynchia: this is seen in close connection with previous and later texts of the same literary genre and with a close inspection of its style and method. The use of intertextuality is not entirely new, since Occhipinti is aware of the relevant results of the aforementioned study by Bleckmann: this scholar had argued that P, the conventional sigla for the name of the author, depended on and readapted Xenophon's Hellenica. However, the book under review is the first systematic comparison of the Hellenica Oxyrhynchia with a range of historians beyond the canonical comparanda (e.g. Thucydides and Xenophon), and it also recurs to narratology to understand the Hellenica Oxyrhynchia.

In the first part (chs. 2-4), the author adopts an apparently traditional approach, since she contrasts the text with other sources dealing with the same events. These chapters actually go beyond the claimed objective, because they challenge the scholar consensus, for instance, on a schematic reprisal of Thucydides' Histories, and also contribute to the general revolution in the studies of Diodorus' historiographical method. The narrative structure of the Hellenica Oxyrhynchia is interspersed with digressions and narrative sections, which can be organised in a Ringkomposition as in Herodotus' Histories, as shown by the analysis of P.Oxy. V 842,16.1-18.5 (24-27): even if the annalistic structure according to summers and winters, therefore, is typically Thucydidean, the author combined Herodotus' and Thucydides' methods of composition.

A further, possible point of contact between the Hellenica Oxyrhynchia and Herodotus, unnoticed in these terms by the author, is the evaluation and consideration of Persian sources and traditions; Occhipinti's comparison of the description of Agesilaus' Asian campaign in Xenophon with the perspective of the Hellenica Oxyrhynchia (ch. 3) suggests that the author was not merely reacting and commenting on Xenophon's Spartan version of the events. In the chapter 4 on Diodorus, the similar versions conveyed by the Hellenica Oxyrhynchia and by Diodorus are seen as a proof of Diodorus' own readjustment and adaptation of the original source, independently of eventual intermediate sources such as Ephorus. Since Diodorus actually shows a level of autonomy in the moralisation of history and application of later labels to Classical history, there is no need to postulate an additional ring in the Quellenforschung of Diodorus' Library.

The second part consists of thematic studies in the Hellenica Oxyrhynchia. These focus on different topics, such as Athenian imperialism and the internal debate on its polypragmosyne (ch. 5), the growing acknowledgement of new forms of continental hegemony in the fourth century (ch. 6), historical causation (ch. 8), or the vague label of 'moralistic history', as applied to P and to other contemporary historians (ch. 9). Overall, the thematic approach sets the Hellenica Oxyrhynchia in its proper historical and literary context: only after a strict intertextual and punctual reading of the fragments does Egidia Occhipinti suggest a possibly convincing chronology of the text in the second half of the fifties of the fourth century BC. This span emerges from three pieces of evidence: firstly, the terminus ad quem of 346 BC, the end of the Third Sacred War, since P refers to conflicts between the Phocians and the Locrians as still in course (P.Oxy. V 842, 18.3). Moreover, the author stresses the debt of the Hellenica Oxyrhynchia towards Xenophon's Hellenica, completed before ca. 355 BC, even though she goes beyond Bleckmann in repeatedly marking the independence of P and the coterminous political and ideological climate; thirdly, Occhipinti sees the debate on Athenian polypragmosyne set in the text in the years of the Corinthian War as an echo of the actual debate of the fifties (102-106).

This section confirms the impression that P continued Thucydides for the role of the authorial voice and the distinction between declared causes and truer (not false!) causes of the wars, but he was not a mere follower without innovations: for example, the focus on the internal factions in Thebes and in Athens is clearly reminiscent of Thucydides' attention to the place of internal stasis and its relationship with international politics, but seems to be stronger in depth. P is similar to Aristotle and behind Diodorus for the focus on the different souls of the Athenian gnorimoi and the refusal of generic allegations on 'the Athenians'. Individuals are often found responsible for collective actions, and for this same reason (ch. 9), the 'explanatory moralism' of P is different from the use of moralism and paradeigmata in authors like Ephorus and Theopompus ('descriptive' and 'prescriptive' moralism, in Occhipinti's words). Incidentally, if this difference were accepted, it would also give new arguments to deny Ephorus and Theopompus the Hellenica Oxyrhynchia; under this respect, the book under review is to be commended, because it deliberately avoids to address an issue, the authorship, which can only be fully considered if the text is properly analysed.

The conclusion sums up the main results of the investigations and recalls the similarities of the HO with the historiography of the fifth and the fourth century BC. Among the Appendixes, which include a translation of selected passages, the second one offers a few considerations on the oral circulation of history at the time of composition of the Hellenica Oxyrhynchia and the third one highlights the Roman setting of Diodorus' political thought. The most stimulating appendix, the first, is actually a revised version of a previously published article (APF 60, 2014: 34-44): it is claimed that the Theramenes Papyrus (P.Mich. 5982) could belong to the Hellenica Oxyrhynchia, and there is a new integration for the ll. 31-32.

As a final note, it should be noted that two further new integrations to the text of the Hellenica Oxyrhynchia are proposed in this book (44-46; 71-72): since they result from a new autopsy of the papyri and are corroborated by sound linguistic and historical arguments, these interventions add to the general impression that the essay will remain an important contribution in any future study of the Hellenica Oxyrhynchia and of fourth century historiography.