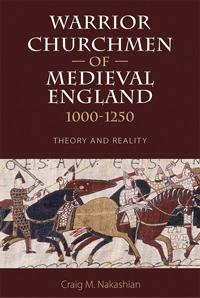 Medieval reformers policed the divide between clergy and laity. Keeping clergy off the battlefield was one element of that program; fighting was for laymen. Craig M. Nakashian examines the limits of those efforts, both ideological and in terms of practical impact. Historians have seen the ideas of the reformers who were most emphatically against warrior clergy as powerful, shaping both ideas and reality by the end of the twelfth century. This book minimizes this influence.

To deal with the Reality of the subtitle first. Throughout his period, Nakashian finds warrior clergy leading men in the field, serving as commanders of campaigns, or actually wielding weapons themselves. These appear as a series of case studies, mostly of bishops, from Odo of Bayeux to Peter des Roches. Thomas Becket is a rare archdeacon to appear among these men, and does so because he eventually became archbishop. I suspect the sources drove this decision: only prelates typically had high enough profiles to draw the attention of the chroniclers. But this fact also means that it is unclear how active lesser clergy were as warriors.

The real action in this book is in the realm of attitudes and ideology. Nakashian provides a long view of the place of violence in Christian thought to take the story up to the eleventh century. Central is the New Testament's Garden of Gethsemane. This episode was most easily taken to mean that clergy should not wield the sword that Jesus ordered Peter to put in its place. Yet some readers took it to mean something else: that the sword had a legitimate place. Many would use this account to condemn clerical warfare, others to justify it.

Nakashian argues that reform literature attacked clerical warriors, but that worries about simony and concubinage loomed larger. One wonders whether the absence of evidence of lesser clergy engaged in warfare provides a clue to this emphasis. Perhaps most clergy were more or less equally liable to engage in sexual relations or purchase churches, and war was an elite activity (as it largely was), explaining where reformers focused their attention. Some reformers were also willing to compromise when it came to warrior clergy; Ælfric of Eynsham is for Nakashian the most rigorous in his condemnation. In any case, reformers had their greatest impact in the canon law, but even there Nakashian finds some inconsistency in the vigor with which the canonists prohibited clerical warfare.

But the central theme here is that for commentators on actual clerical warfare the ends justified the means. Nakashian shows this most strikingly in his survey of various warrior bishops. Chroniclers who approved of the cause in which a bishop fought accepted, even praised, that bishop's military activity even when they condemned other clerical warriors. One would most expect this when it came to clergy on Crusade, and so Nakashian finds. Perhaps less expected, warfare on behalf of the king was also largely acceptable. Criticism of warrior clergy was reserved for those who fought in causes the chroniclers found illegitimate. An obscure instance, perhaps apocryphal, is paradigmatic. William of Newburgh recounts the wicked Bishop Wimund of Sodor and Man's war against an unnamed Scottish bishop. Wimund led his troops in the attack, only to be felled by the Scottish bishop with an axe. William treated the Scottish bishop as a hero. The contrast between these bishops, for William, was a contrast between worldliness and the Christian simplicity befitting a bishop. Indeed, Nakashian finds in many of his case studies that when warrior clergy did draw criticism, they drew it because of their worldliness, for living like a knight, rather than for their role in warfare specifically. This argument may explain why in one case Nakashian goes a little far afield for a work on England: Philip of Dreux, bishop of Beauvais, who fought for Philip Augustus at Bouvines, and who is an especially good example of chroniclers' different agendas influencing their accounts of clergy at war. Indeed, even reformers themselves accepted clergy at war when it suited. Gregory VII engaged in warfare as needed; Innocent III embraced Peter des Roches, never mind his frequent role as a commander of men at arms, even of crossbowmen, among the least reputable of medieval warriors.

A chapter on literature uncovers similar acceptance of clerical warriors, in particular in the Song of Roland, the Song of Aspremont, and the Chanson d'Antioche. Here some subthemes emerge: lay resentment that clergy benefit from the suffering of lay knights in fighting to defend them, lay appreciation of clergy who indeed took up the sword, and lay feeling that maybe clergy should leave the fighting to real knights after all.

Nakashian's analysis also leads to a rereading of some of the careers of the clergy he examines. For example, Henry of Winchester did not evolve, withdrawing from war in favor of a more fully clerical life, as scholars have suggested. Rather, he simply ceased to be positioned to fight for king or Christianity. Had such opportunities been available in his sunset years, there is no reason to think he would not have embraced them.

Nakashian's overall picture is of continuity. Early thirteenth-century warriors like Peter des Roches appear in this book not as throwbacks to an earlier time when bishops like Odo of Bayeux strode the earth, but simply as similar men who aroused similar feelings among contemporaries. Indeed, in a concluding chapter Nakashian argues that his conclusions apply through to the end of the Middle Ages. Some change does emerge. By the later twelfth century, writers were influenced enough by reform ideology that they sometimes softened their depictions of clergy at war who met their approval. Almost comically, William the Breton has Philip of Dreux just happening to have a mace in his hand - so as to imply he had not planned on personal combat - when he smites King John's brother at Bouvines. This development may deserve more highlighting than it receives here. It suggests the growing power of reform ideology when it comes to clergy and war.

Evidence is handled clearly and well. Nakashian is a splitter rather than lumper, carefully distinguishing between charges of worldliness and explicit complaints of bishops acting as warriors. Of course, traditionalists will be lumpers on such points, arguing that a warrior cleric was obviously thereby being worldly. Such readings do not, however, handle well the warrior clergy who got praise, like Lanfranc, or even Saint Anselm. I have some quibbles. Nakashian points to images of Archbishop Turpin wearing both armor and clerical vestments in battle as further evidence of the acceptance of his fusion of the roles of warrior and priest (106). But one suspects that an artist almost had to depict Turpin thus simply to distinguish him from other figures; reading such images ideologically may miss the practical problems artists faced. And, it must be said, some of the images cited in fact show Turpin in vestments only. Anna Comnena appears as witness that clergy on Crusade actively engaged in battle, something Urban II did not anticipate (78). But her attitude toward the Latin barbarians may have produced an overdrawn picture. Nakashian argues that prelates tended to be drawn from the nobility, and so were raised among warriors. This point is oddly undercut by an argument that many clergy came from the lower orders (141). In defense of the influence of noble backgrounds, it's worth emphasizing that Nakashian's exemples of warrior clergy do seem largely to be of aristocratic origin, although there were exceptions, like Becket.) Such matters do not, however, prevent this from being a persuasive book.

Much scholarship informs it. Hugh M. Thomas's The Secular Clergy in England, 1066-1216 (2014) probably came out too late for Nakashian to use. Thomas also observes that norms regarding clergy and warfare were less rigid than the canon law, although he sees prohibitions on clerical warfare as more effective than Nakashian does. More important, Thomas considers warfare under the broader topic of violence by clergy. Among other things, this move lets in record sources of a kind largely absent from Nakashian's discussion and gets one beyond bishops. Another aspect that might bear more discussion in a book that distinguishes clerical worldliness from clerical involvement in warfare is the tensions regarding the world in general experienced by secular clergy in this period. Nakashian is aware of these tensions, citing an article by John Cotts on the subject. But Cotts' fuller The Clerical Dilemma: Peter of Blois and Literate Culture in the Twelfth Century (2009) goes unexploited.

Nonetheless, this book will be of real value to all interested in clerical warfare, not to mention those concerned with some individual prelates of the age.