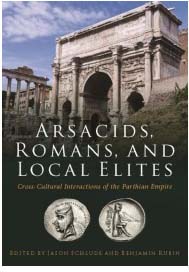 Many generations of scholars have paid little attention to the history of the Parthian state ruled by the Arsacid dynasty. The reason for this approach has been their dismissive belief that the Parthians did not form their own sophisticated civilisation, but only imitated - capably or less so - the Hellenistic patterns. The only researcher to consistently oppose this position was Józef Wolski. In his numerous works, Wolski showed that not only did the Arsacids establish an original monarchical ideology and political programme, but their empire was also an equal partner to those of both the Seleucids and Rome. His efforts to restore the Arsacids to their rightful place in the history of the ancient world were not to be in vain, as shown by the regular and rapid growth in the last two decades in the number of publications on various aspects of the history of the Parthian state.

One such work is the recently published volume edited by Jason M. Schlude and Benjamin B. Rubin containing seven studies of the cultural relations between the Arsacids, Romans and local elites, in both the regional and the local context, the product of the panel on the Parthians that took place in 2012 and 2014 at the annual meeting of American Schools of Oriental Research.

The volume opens with an article by Jeffrey D. Lerner, a well-known scholar of the early history of the Arsacid state: "Mithradates I and the Parthian Archer" (1-24). The author attempts to explain two issues: why, on the reverses of Mithradates I's coins, was a diphros (stool, chair) replaced with an image of an omphalos (baetylus), and who is portrayed by the so-called Parthian Archer sitting on it? Lerner argues that the image of the archer can be identified as that of Ārash, who appears in Aryan mythology. His association with the omphalos is the result of both religious syncretism, caused by borrowing from Seleucid minting the image of Apollo sitting on an omphalos with the god Mithra, and a distinct ideological message seeking to propagate Mithradates' victories over the Greeks.

Jake Nabel's article ("The Seleucids Imprisoned: Arsacid-Roman Hostage Submission and Its Hellenistic Precedents", 25-50) examines the role of hostages in Roman-Parthian relations compared to the practice known from Seleucid-Parthian relations. Nabel analyses data on this subject, concluding that the presence of hostages from the Seleucid dynasty in the hands of the Arsacids was a purely political issue. The presence of Parthian hostages in Rome went much further, however. For the Romans, they were not only guarantees of abidance by the rules of joint treaties, but to a far great extent also an important element of their domestic policy - as they were for the Parthian rulers, in fact. Roman emperors, starting from Augustus, were happy to cite the presence of these hostages in their propaganda to their subjects as evidence of their superiority over the Arsacids, whether or not they actually managed to get any. For the Parthian kings, meanwhile, giving up hostages enabled them to rid themselves of potential rivals.

According to Kenneth R. Jones ("Marcus Antonius' Median War and Dynastic Politics of the Near East", 51-63), Mark Antony's campaign in 36 BCE against the rulers of Media Atropatene should be viewed from a different perspective to the one that is usually taken. To assess his actions, we should perceive them as those not of a Roman commander, but rather of a Hellenistic dynast. We should also note that the surviving tradition regarding Mark Antony's Median campaign is a biased one. It was distorted by the victory of Octavian, who as emperor attempted to depreciate his rival's achievements in order to emphasise his own successes in the battle with the Parthians. Jones does not doubt the credibility of the facts described in the sources, but rather their interpretation by later authors. He argues that Antony wanted to regulate relations with the Parthians in order to strengthen his own position by having free rein in building alliances with the rulers of Media Atropatene, Iberia and Armenia. The only hindrance to this plan was the Parthian king's concerns regarding the political consequences of an agreement between Antony and the king of Media Atropatene. This was what led him to attack Antony's army, thus dashing the Roman commander's political plans. The political usefulness of these plans is confirmed by Augustus' later policy towards the Parthians - according to the author, a copy of his predecessor's plan. This explains the reasons for the distortion of Mark Antony's activity in historiographical tradition.

The problem of the diplomatic contacts between the Parthian rulers and Roman emperors in the first half of the first century CE is the subject of Jason M. Schlude and Benjamin B. Rubin's article ("Finding Common Ground: Roman-Parthian Embassies in the Julio-Claudian Period", 65-91). In Roman-Parthian relations, the rule of the Julio-Claudian dynasty is distinguished by the intensive mutual contacts maintained through numerous embassies. The authors use this term to refer to all forms of direct contacts, at the level both of the rulers and of the groups that sent the embassies. Their objective is to ascertain what the significance of these embassies was in the relations between the two states. They argue that, contrary to many scholars' opinions, in the period from Augustus to Nero such embassies were not only a diplomatic instrument used to keep the peace, but also played an important role in cross-cultural exchange, taking place in various forms including exchange of gifts. Schlude and Rubin point to the role of Musa, a slave whom Augustus offered to Phraates IV at the Arsacid court, as an example of such cultural influence.

The next three articles concern the political contacts of the Parthians and Rome with the rulers of the states within their sphere of political and cultural influence. The subject of the first, by Jason B. Schlude and J. Andrew Overman, is Herod and his relations with the Parthians ("Herod the Great: A Near Eastern Case Study in Roman-Parthian Politics", 93-110). According to the authors, the Judaean ruler attempted to fully exploit the period of civil war in the Roman Empire to protect his own interests in relations with the Parthians. His position also apparently indirectly contributed to the formation of Roman-Parthian relations. Peter Edwell ("Osrhoene and Mesopotamia between Rome and Arsacid Parthia", 111-135) examines the political and cultural situation in northern Mesopotamia. This area was heavily influenced by Iranian culture, but from Trajan to Caracalla it was the theatre of Roman military activity. Edwell is interested in the influence of these two factors on the formation of its cultural aspects. The source upon which he bases his observations is the minting of the local rulers and cities. His analysis leads him to the conclusion that the Roman conquests in this territory contributed to the local elites' moves from Iranian models towards Roman ones, resulting in the evident progress made in the Hellenisation of the area. The volume is completed by Björn Anderson's article on the cultural complexion of Hatra ("Beyond Rome/Parthia: Intersections of Local and Imperial Traditions in the Visual Record of Hatra", 137-158). Anderson focuses on the question of whether the art of Hatra is indeed province of Parthian art, or if it should be treated as a local product. He opts for the latter option, citing the parallel case of Nabataean Petra. The author's argument rests upon the presence in the art of Hatra of models taken from Parthian, Syrian and Greek culture, in whose orbit this city, on account of its location and role as an important trade centre, remained constantly and at length.

It is no secret that the problems discussed by the contributors to this book have long been the subject of analyses and interpretations. The originality of the articles lies in the context of the perspectives that they provide, in confronting the issues from the angle of mutual cultural influences. The problem is, however, that the paucity of sources means that this fresh perspective is not always available or successful. At times, this situation encourages speculation or formulation of hypotheses which are hard to verify or accept. Several of the studies featured in the volume are worthy of attention owing to their valuable proposals and interpretations. Others are notable because their authors try to reveal the current state of knowledge on the issue in question. Yet there are also articles whose authors either restrict the problem they are analysing to just a few selected aspects, without a thorough analysis of all available the source material, thus lessening the power of their arguments and proposed conclusions, or base their conclusions on evidence that is too flimsy to be treated as convincing. One might also notice that, although all the texts were written at the same time and among the same circle of scholars, they differ markedly in terms of the level and grasp of the subject literature that they use. In conclusion, this book is certainly worthy of the attention of scholars with a good grounding in the history of the Arsacid state and Roman-Parthian relations in the first-third centuries CE, who are fully able to appreciate its merits and weaknesses.