Daniel W. Leon: Arrian the Historian. Writing the Greek Past in the Roman Empire, Austin: University of Texas Press 2021

Jaakkojuhani Peltonen: Alexander the Great in the Roman Empire 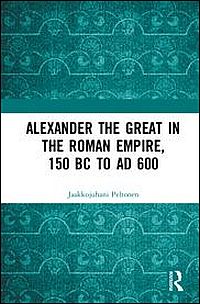 The story of Alexander III of Macedon as we know it is, in an important sense, a Roman story, as Diana Spencer observed in 2002 [1], in a passage alluded to by Peltonen in his conclusion (215). As contemporary sources for Alexander's career survive only in fragments, we are dependent on texts written in the Roman period for the narrative. The aim of Peltonen's book is not to investigate the historical sources in detail but to analyse the opinions and judgments expressed about Alexander by Roman, Greek, Jewish and Christian writers in this period. He has cast his net wide and provides what must surely be the most complete conspectus of utterances about Alexander from the 750 years in his purview; authors whom would not have thought of consulting for a comment about Alexander include Quintilian, Vitruvius and Symmachus among many others. Surely no one will need to do this work of collecting the references again. I learnt much from the discussion of the late imperial panegyrics, but this raised in my mind the further question why there are some great conquering emperors (Aurelian for example) who are not compared to Alexander. Peltonen's method does not make it easy to raise such a question as this.

Peltonen begins from the premises advocated by the present writer in 2003, that writers in this period do not express 'views' of Alexander, but make use of his character and stories about him for rhetorical purposes, i.e. to illustrate arguments; thus Alexander may appear at different times in different works with opposed meanings. Peltonen focuses on the subject under several main headings: the imitation of Alexander and comparison of Roman personages with Alexander (usually to the Roman's advantage); Alexander as a military leader and civilizer; his behaviour and character including the vices of anger, drunkenness and 'madness'; his interest in philosophy and favour towards philosophers; his treatment of his friends; his supposed favour to the Jews; and - in Christian writers - his villainous inhumanity which for them shows no redeeming features.

In so doing Peltonen rather underplays the Hellenistic origins of some of these positions, in particular imitatio and comparatio in the Hellenistic period. He mentions derivations of Alexander's image in coin portraits and Apulian vases (19) but makes no reference to such explicit imitators of Alexander as Philip V of Macedon or Mithridates VI of Pontus. He seems unaware of Claudia Bohm's Imitatio Alexandri im Hellenismus. [2] (In general very few works in languages other than English are adduced in the discussion). He admits (219) that a great many of the famous stories about Alexander derive from Hellenistic sources and raises as a topic for future research the question whether many of the Roman topoi about Alexander were already established in Hellenistic writers: the data were in fact collected by L. Eicke in his dissertation of 1909 [3], and were discussed in articles about 'the Stoic view' of Alexander by Stroux 1933 and Fisch 1937 [4], admittedly with conclusions that would convince neither Peltonen nor me.

Peltonen's method of proceeding in each of his chapters is to take an insight proffered by an earlier scholar (Diana Spencer; myself; Richard Saller, Averil Cameron) and then to announce that more evidence is required to substantiate that scholar's assertion. (E.g. 92, 'Stoneman neither tests this claim or elaborates it further'; 133, 'This topic of research has not usually interested scholars concentrating on the nature of friendship and patronage in ancient society'). He proudly piles on the evidence in remorseless detail, but the end result is not always any new understanding.

Peltonen makes a distinction between Greek and Roman views of Alexander in the period, by which Greeks are more likely to see Alexander as one of their own while Romans (whether historians, philosophers or rhetors) treat him as an 'other' to show up the virtues of the Romans. This is undoubtedly a more valuable distinction than those previously made between Stoic and Peripatetic 'views'. Jews and Christians, too, have varying views of Alexander on the basis of their ethnic or religious identity rather than of philosophical argument.

Peltonen's method does not always stand him in good stead. In introducing his discussion of Paladius' De Bragmanibus he begins with his usual mantra, 'Not much attention has been paid to the work's intended audience or why it was written' (178). He thus ignores J.D.M. Derrett's extensive work on the treatise leading to the conclusion that it is a protreptic for potential or would-be Christian monks, which I repeated in brief in the introduction to my translation (1994 and 2012). [5] Peltonen reaches a broadly similar conclusion, but over-simplifies in treating the work only as a Christian text, ignoring its Cynic origins and its extensive overlap with the Stoic style of Epictetus (the teacher of Arrian, whom Palladius claims to be the author). The positions expressed in this text were many centuries in the making.

I was surprised to read on page 165 that Alexander's role in the Book of Daniel has received 'no attention at all' - this despite the extensive bibliography on his supposed visit to Jerusalem going back to A. Momigliano 1979. [6] Still, the discussion of the Jewish use of the figure of Alexander is cogent and illuminating as regards the sources in Greek, which he describes as 'few' (164). Peltonen makes no use of - and offers no explanation for not using - Rabbinic sources, some of which certainly developed within his period.

There is no discussion at all of the most extensive late Latin text about Alexander, the translation of the Greek Romance by Julius Valerius. Here, if anywhere, one might expect to find evidence for the Hellenistic roots of the late Latin view of Alexander. This is the more surprising as Peltonen devotes three pages to the contemporaneous Itinerarium Alexandri. Instead, Peltonen asserts (219) that no Latin text shows knowledge of the Romance before Fulgentius. The omission has consequences, since it allows Peltonen to lay emphasis on the fact that Romance stories are not found in earlier Latin authors, even though Plutarch and Philostratus (not in the index) were certainly aware of some of those stories. Plutarch and Arrian both turn their backs on the fabulous aspects of Alexander's story, but their view of his importance must have been formed in some measure by the legend.

In sum, this is a valuable collection of evidence embedded in a measured and judicious discussion. There are some surprising omissions and blind spots, not least about earlier scholarship. There are few surprises in the conclusions reached by Peltonen, though his remarks in his conclusion are worth reflection: he has shown that genre does not determine meaning, and he raises the question whether Roman treatments of this historical figure are an 'abuse' of history. What is history for? More research on ancient views of the past (as he advocates) would help to answer such questions.