Dimitris J. Kastritsis: The Sons of Bayezid. Empire Building and Representation in the Ottoman Civil War of 1402-13, Leiden / Boston: Brill 2007 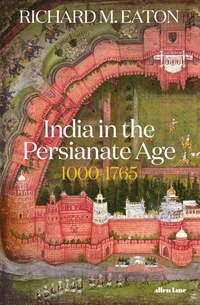 In India in the Persianate Age, 1000-1765 Richard Eaton provides a broad overview of the history of the Indian subcontinent in the second millennium up to the colonial period, while focusing on India's place within the broader Persianate world. Eaton turns away from the old-fashioned understanding of India's history in these centuries as a period "in which religion comprised the fundamental building block of community identity" (9). Defining this period as India's "Muslim period," Eaton convincingly argues, is anachronistic. Instead of religion, Eaton proposes the prism of the 'Persian Cosmopolis' through which to examine India's history during this period: Eaton's main argument is that "much of India's history between 1000 and 1800 can be understood in terms of the prolonged and multifaceted interaction between the Sanskrit and Persianate worlds" (13). Drawing similarities between Sheldon Pollock's formulation of the Sanskrit cosmopolis and the Persian one, Eaton explains that both cosmopoleis had "a transregional, 'placeless' quality", both "were grounded in a prestige language and literature that conferred elite status on its users" and "both articulated a model of worldly power - specifically, universal dominion" (11-13). Lastly, while both cosmopoleis were spheres in which religious traditions were elaborated, discussed, and critiqued, neither of these cultural formations was grounded in a religion, "but rather transcended the claims of any of them" (13).

No longer focusing on a supposed antagonistic religious clash between "Hinduism" and "Islam", Eaton's fresh perspective makes it easier to account for larger cultural processes, of which religion is only one aspect and not the defining feature. India in the Persianate Age is thus not merely an introductory survey of India's history in the second millennium, but a book with a compelling argument about the centuries-long interactions between the Persianate and Sanskritic worlds, and between South, Central and West Asia. Its innovation further lies in applying the term 'Persianate' not only to a geography but to a time period: the emphasis on India in the Persianate Age allows for an even more complex understanding of the 'Persianate' as a dynamic notion, changing and adapting not only over space but also over time.

The Persianate world had no single political or geographical center: one should be wary in assuming that Persianate culture developed in the geographical area now known as Iran, and was later carried as is to other regions in West, Central and South Asia. This point is somewhat underplayed in the book and perhaps should be emphasized: the Persianization process of South Asia did not follow the establishment of some well-defined Persianate culture in Iran, and no sole force ever existed to generate that process (although its propagation almost always followed local political expansion, as the book clearly shows). Rather, the literature that carried the values, aesthetics, and political thought that were identified with the Persian cosmopolis, was composed in various regions greatly distanced from one another, and was circulating over an even wider geography that spanned many vernacular cultures. From a very early stage, South Asian kings, historians, Sufi shaykhs, merchants, poets and others, actively participated in the shaping of Persianate culture, concurrently with the Persianization of Iran and Central Asia.

The book is structured as an introductory history textbook and does not assume any prior acquaintance with the field. It progresses chronologically from the arrival of Turkic powers in South Asia and the emergence and expansion of the Delhi Sultanate between the eleventh and fourteenth centuries, through the rise of regional courts and vernacular cultures in the fifteenth and sixteenth centuries, to the consolidation of the Mughal empire, its expansion, and eventual decline in the eighteenth century.

While quite a lot will be familiar to scholars of South Asia, the framing and perspective Eaton provides are unique. Thus, for example, chapter 1 closely compares the differences in conceptions of political territory held by the Central Asian Turkic clans which settled in North India, and those held by the Chola rulers in South India. Chapter 2 explores the dissemination of Persianate culture that accompanied the Sultanate's annexation of new territories, and further investigates the continued Persianization of independent states after the contraction of the Delhi Sultanate's political frontiers. In this way Eaton sheds light on the political and military dimensions of Persianization processes as well as on separate processes of cultural assimilation within the Persianate world. Chapter 4 focuses on peninsular India between the fifteenth and seventeenth centuries, where different states adhered to different religious traditions. Through a fascinating anecdote about the shared usage of coins throughout the region, regardless of religion or political boundaries, Eaton provides a fresh economic perspective to argue that "people actually living at that time experienced the plateau as a single economic zone that transcended [...] cultural difference" (193).

Chapters 5, 6, and 7 are dedicated to the Mughal empire from Babur's time until Aurangzeb's demise. Chapter 7 is particularly interesting: Eaton acknowledges the religious differences between Aurangzeb and Dara Shukoh, to which their rivalry is usually attributed in scholarship, but continues to argue that Dara Shukoh's main disadvantage in the War of Succession was not his supposed heretic beliefs but rather his arrogance that alienated the nobles whose support he needed. Furthermore, Aurangzeb's alleged bigotry, it is argued, was not the reason for the eventual decline of the Mughal empire, but rather his micro-management of the empire and the decades-long wars he led in the Deccan.

Chapter 8 provides explanations regarding the creation of the two largest Muslim communities in Eastern Bengal and Western Punjab in pre-British India. Eaton argues against the claim that the state's intention was to promote Muslim societies on the frontiers. He suggests that the state's overriding concerns were loyalty, stability and agrarian productivity, and since most pioneers were Muslims, "more indigenous peoples were exposed to Muslim [...] religious culture" (365). Lastly, Eaton argues that during this period the Mughal empire was undermined from within and below, as local power holders challenged imperial authority with resources that were available throughout Indian society due to the commercialization of the Indian ocean region.

India in the Persianate Age constitutes a significant contribution to the study of India's history in the second millennium. Richard Eaton's book would be excellent reading for students learning for the first time about India's medieval and early-modern history, as well as for scholars interested in the cultural history of South Asia.