Nicola Brandt: Landscapes between Then and Now 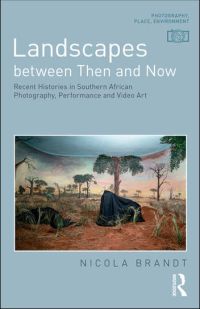 Fraught histories of colonialism, white settlement, apartheid, and war are deeply inscribed into the land of Southern Africa. Concomitantly, land as well as its visual representation and perception as landscape are crucial to the formation of identities and tightly entangled with them. That photography as a "tool of empire" played a pivotal role for colonial administrations - not only in terms of classifying people into "tribal types" but also in terms of mapping and capturing the land - are by now commonplaces in the scholarship on photography in Africa. [1] In her monograph Landscapes between Then and Now. Recent Histories in Southern African Photography, Performance and Video Art, Nicola Brandt sets out to examine how artists and photographers of the late twentieth and early twenty-first centuries debate this complex issue in their works.

Concentrating on South Africa and Namibia with occasional references to Angola, Brandt does not follow a strictly chronological order. Yet, she roughly divides the monograph, that is based on her doctoral thesis, into two parts corresponding to the "then and now" the book's title refers to. Central to this division is the shift in the photographic tradition of Southern Africa during the 1990s. The formal end of apartheid promised that a cultural photographic activism, as it had developed in previous decades, would become obsolete. In turn, new "experimental forms of the documentary idiom within contemporary art" emerged (37). It is this transition that allows Brandt to locate very diverse artistic positions in the conceptual coordinate system of land and landscape, place and space, belonging and identity, embodiment and the self, discussing them against the backdrop of colonial photography, the ethnographic gaze, and social documentary photography.

In the book's first part, Brandt mostly concentrates on examining how practitioners like Santu Mofokeng, Jo Ractliffe, Sabelo Mlangeni, and Thabiso Sekgala relate to the tradition of documentary photography. A central point in Brandt's argumentation is that "'landscape photography' [...] had little currency" for photographers during apartheid, when photography was a form of political activism (40). Focusing strongly on Santu Mofokeng's writings and works, Brandt emphasises that he was an exception as a black photographer to engage with landscape (41). His practice, according to Brandt, developed from modes of blunt exposure, as they were prevalent during the struggle years of the 1970s and 1980s, towards capturing seriti - the aura, presence, spirit to be found beyond visibility - in more recent years. Valuing it as a contribution to the historical reckoning with the joint pasts of Namibia, Angola, and South Africa, she similarly attests Jo Ractliffe's work a moving away from photography's "bearing witness"-dictum that informed much of South Africa's photographic practices during apartheid (99, 121).

How much Brandt's examination relies on the notion of the body in relation to land becomes evident in those paragraphs that discuss for instance Sabelo Mlangeni's series My Storie or Zanele Muholi's Somnyama Ngonyama. The author points out how these photographers negotiate questions of identity and the black body in Africa, disputing the tradition of ethnographic portrait photography. These sections prepare the reader for the book's second part, that eventually focuses more explicitly on the body and how it connects with notions of class, race, age, and gender. Moving from the "then" to the "now", Kristine Stiles' observation of how performance art becomes an important form of expression in societies that have experienced considerable power shifts (137-138) is crucial to Brandt to anchor her following analyses. On the one hand, she discusses works that are concerned with colonial monuments and sites of commemoration, challenging and contesting forms of remembrance. On the other hand, Brandt examines works on identities that question binary gender representations and stereotypes, as for instance Athi-Patra Ruga's performance art.

At this point at the latest, it becomes evident how misleading the book's title is and that Brandt's study encompasses more than mere reflections on landscapes and artists' engagement with it. In fact, to operate within the broad conceptual coordinate system outlined before means to tackle some of the most prominent, contested, and theorised concepts of art history in general and African photo history in particular. Indeed, while the examination's positioning in this conceptual framework might speak of the author's ambitious approach, it turns out to be the monograph's Achilles heel. Firstly, Brandt remains vague in defining the concepts and does not meet their theoretical depths. Secondly, the vast selection of photographic and artistic positions that Brandt locates in this coordinate system frays the argumentation. For readers it is at times difficult to relate the numerous artistic and photographic works to each other and one wonders if the inserts on Margaret Courtney-Clarke or Kristin Capp, for instance, were indispensable.

That Brandt, however scantly, points out Jacobus Hendrik Pierneef's landscape paintings and how Mofokeng referred to them (61, 69, 71-74) seems rather unsurprising. Being iconic expressions of Afrikaner nationalist aspirations of settlement, belonging, and nationhood during the twentieth century, Brandt ties them in with the terra nullius trope and the role of today's tourism in promoting Southern Africa's landscapes (15, 61, 71-74). Yet, at this point Brandt ignores important scholarship on the political connotation and depiction of landscapes in the visual culture during the years of the Union and apartheid South Africa, that would have provided her research a more profound historical and theoretical grounding. [2] Landscape featured frequently, for instance, in apartheid South Africa's propaganda photography and the regime eagerly distributed landscape photographs in magazines and the state's tourism advertisement. Instead, Brandt writes extensively about her own artistic work. In doing so she brusquely inscribes herself into the art historical discourse and undermines her own position as scholar. That she includes a reflection on her own positionality as a white "Namibian-born artist of German descent" (164) but does not reflect her role as author of a scholarly monograph only corroborates this self-positioning even more.

Despite these shortcomings, Nicola Brandt's study highlights a number of relations, continuities, and contestations in artistic negotiations of land and landscape and hereto linked concepts between "then and now". Through the great variety of photographic and artistic positions, she draws attention to new approaches and the ongoing debate, emphasizing that there are still many voices to be heard. That Brandt does so by bringing together works of social documentary photography with contemporary performance art is the book's most intriguing asset. Through this viewpoint, without explicitly articulating it, Nicola Brandt ultimately questions the documentary "bearing witness"-dictum as a mode to tackle the past and advocates other forms of artistic engagement instead to come to terms with the fraught histories of land in Southern Africa.