Diane J. Reilly: The Cistercian Reform and the Art of the Book in Twelfth-Century France, Amsterdam: Amsterdam University Press 2018 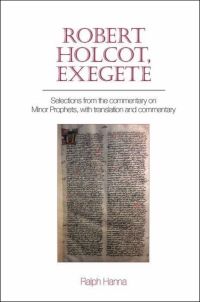 The works of Robert Holcot, or 'England's greatest Christian humanist' (206), enjoyed a wide circulation during the Middle Ages. His writings, dispersed all over Europe and as far east as Cyprus, promoted Holcot as the father of moral theology and fascinated readers during the fourteenth and fifteenth centuries.

This interesting selection of fragments from his commentary on Minor Prophets - about a seventh of the entire text according to the foliation in manuscript B (see below; according to Hanna's criteria, he has edited almost a fourth) - edited and translated into English on facing pages by Ralph Hanna, is a valuable contribution to the discovery of new aspects of the theology of the Oxonian scholastic. Besides his commentary on Wisdom, Holcot's text on Minor Prophets reflects his intellectual efforts to preach the key role the prophets play in deciphering the whole of Scripture. In his words, 'the twelve prophets are like the twelve gates of a city, that of Holy Scripture' (33). For this reason, Holcot highlights their assistance in teaching scriptural knowledge as an aid on the path to salvation, a path that begins with control over imperfections such as 'simony, pride, idolatry, ingratitude, stupidity, and partiality, and various other things' (31). On the level of modern scholarship, Hanna's explicit intention is to liberate Holcot's text from Beryl Smalley's interpretation as developed in English Friars and Antiquity in the Early Fourteenth Century (Oxford, 1960), which, according to Hanna, reduces Holcot to his sources and his moralising message. Hanna proposes a different reading that tends to be more attentive to Holcot's intellectual project.

The edition / translation opens with the Prohemium to the commentary on the first of the twelve Minor Prophets, Hosea (18-31), which immediately witnesses Holcot's academic context, since he uses the Aristotelien causes in order to introduce the reader to the content of the biblical text. This is followed by the commentary on all three chapters of the second of the twelve, Joel (32-119), a short excursus from Amos 8 concerning Joel 2 (120-121), and a long selection of texts on 'Patience' indicated in the medieval index in the manuscripts (122-161; see on the tabula 163-168). The book is complemented by a useful series of notes, explanations and identifications of sources (169-197). A final 'Commentary' guides the reader to penetrate Holcot's style, which is not always accessible (199-230).

The brief 'Introduction' (1-11) includes a discussion of the date and context of the composition of the commentary, which Hanna places in the early 1330s and perhaps when Holcot was Dominican regent in theology, dated here to 1333-1334. It has recently been established that Holcot read the Sentences in 1331-1332, however, and since at Oxford bachelor lectures on the Bible were delivered afterwards and, in Holcot's case, after some delay, starting on Matthew on 10 February 1333 at the earliest, it is unlikely that Holcot incepted soon enough to be regent in theology the following fall. Hanna has an admittedly inconclusive discussion of the dating based on citations of Master John Ridewall (4-5), whose Fulgentius metaforalis Jeremy Catto has dated to 1333. If Holcot relied on Ridewall's written work, then 1333, if correct, would merely be the terminus post quem. As Hanna remarks, however, Holcot and Ridewall were both at Oxford at roughly the same time and Holcot could have had access earlier to Ridewall's work-in-progress orally or in drafts. If the commentary on Minor Prophets is indeed from the early 1330s, it is thus a bachelor effort, and accordingly Holcot cites his own bachelor Sentences lectures in his commentary (58, l. 449: 'quere que dixi Super Sententias', here rendered in English as 'see what I said in my commentary on Peter Lombard's Sentences', 59). Whereas the bachelor lectures on Matthew required 30 lectures, Hanna estimates that the course on Minor Prophets took up 64 lectures. If, on the other hand, the commentary on Minor Prophets is from Holcot's period as regent master, it is probably from slightly later than the early 1330s. For future research, there are various possible scenarios, any of which would have to accommodate a recently published Introitus to a series of lost lectures that Holcot apparently delivered at Oxford on another section of the Old Testament, Genesis.

The Latin text of the present edition is based on London, Gray's Inn, Ms. 2 (G), which was collated with Oxford, Balliol College, Ms. 26 (B) and Oxford, Bodleian Library, Bodley Ms. 722 (A), since Hanna was unable to access the only other known copy, Valencia, Biblioteca de la Catedral, Ms. 191. Without much discussion, Hanna claims that the earliest manuscript, G, stemming from a different tradition from AB, presents a better text. In this way, clarifying variants found in AB are explained as coming from 'a common exemplar that had been edited for a use more general than theological training'. Since the editor offers only 'a selection of readings' from AB, it is difficult to verify this claim.

Hanna's considerable philological and other skills have ensured that the text, although left unpolished by Holcot, is as fluid and comprehensible as one can hope in both Latin and English. The waltz of authoritative sources (Ovid, Quintilian, Horace, Seneca, Jerome, John of Salisbury, etc.) and the discussion of real-life examples entertain. We read about the beauty of a woman or her sexual experience, the everyday life of marriage, sexual desire ('this sin is associated with so much delight that people almost don't count it as a sin', 41 and 43), the 'collapse from pride into gluttony', lying 'as a false meaning communicated by the voice with the intention of deceiving' (85), and so on. Holcot is a theologian, but sometimes he plays philosopher and uses the scriptural text to explore different sides of the human soul. He presents as the best 'friends' of the human the conscience (47), will (49), memory (55), and intelligence (65). Four kinds of prudence (military, monastic, economic, and political) serve as the 'four councillors' that lead one to act virtuously through the life. Holcot praises 'humility' as the 'first virtue on the way to heaven' (107). He also provides a long series of metaphorical considerations about friendship, depicted 'as a deer supporting the head of another deer' (95), 'as a single heart existing in two bodies' or 'as a single soul between them' (97), 'as a chameleon that changes its colour' (99), 'as light or as the sun bringing joy' or 'as a child rending a garden' (104), and 'as a iron sharpening iron' (105). The abundance of such poetic images is colored by moral thoughts from copious examples. Holcot plays with the imagination of his audience and promotes a sort of captatio style. His project is to send a persuasive message about how rich in meaning the scriptural text really is and how deep knowledge and appropriate explanations can help us navigate the present life to reach salvation.