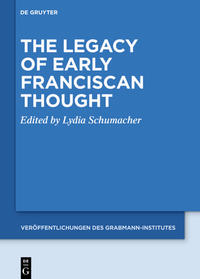 This is the third volume in a series on early Franciscan thought that follows the previous books "The Summa Halensis: Sources and Context" and "The Summa Halensis: Doctrines and Debates". These articles written by prominent scholars are based on presentations given in a series of conferences held in 2019 and 2020 and focus on Franciscan theology during the early thirteenth century (1220-1250) and its influence in subsequent centuries. The primary focus of these essays is the early thirteenth-century text entitled Summa Halensis that scholars have identified as composite of material written by Alexander of Hales (c. 1185-1246), John of La Rochelle (1200-1245), Odo Rigaldus (1200-1275), and possibly Bonaventure (1221-1274).

For those of us who were taught many years ago that Franciscan theology began substantially with Bonaventure (and Dominican theology with Thomas Aquinas) this book is a corrective to that belief. We are presented with a view of the significant theological activity that was going on in Paris in the 1230s and 1240s, where both Bonaventure and Thomas taught. These significant articles show the dynamic nature of teaching and writing that was going on at the University of Paris in the middle years of the 1200s.

Lydia Schumacher, the editor of this volume and series, offers in the introduction the background to this book and a succinct summary of all the essays. This gives us a substantial view of the contents of the entire book that presents the reader with a panoramic view of the multifaceted and complex nature of Franciscan theology as it evolved throughout the later Middle Ages.

On a personal note, several years ago I noticed the name of Alexander of Hales in fifteenth-century Franciscan sermons of Bernardino da Siena and Roberto da Lecce, which inspired me to investigate further this thirteenth-century author. Little did I know that this multi-book project was in production, and it has proved to be useful in understanding the magnitude of Franciscan theology that began in the early thirteen century. The Summa Halensis was influential in not only the world of philosophy and theology, but also preaching which meant that not only was this material used by theologians, but also heard by the general populace.

The first section of the book focuses on the interconnected nature of Franciscan philosophy and theology, and presents substantiative essays on such issues as the creation of matter, the body-soul union, providence, and free will in the writings associated with Alexander of Hales. These papers show the innovative nature of the Summa Halensis regarding the use of earlier medieval philosophical-theological sources such as Aristotle, Avicenna, Anselm of Canterbury, and the Victorine school. They show how previous material was adopted and transformed in the innovative theology and philosophy of these late medieval theologians.

The last two articles in this section are not philosophical in nature. The first is devoted to Odo Rigaldus, who taught at the University of Paris where Alexander of Hales also taught, both becoming Franciscans in 1236. This gives us a glimpse of how a particular friar experienced the theological world of the first half of the thirteenth century. The last article situates the Summa in a more balanced way than previous studies regarding the burning of the Talmud in the early 1240s, which shows the complexity of Christian-Jewish relations in the Middle Ages. It also proves that one must translate Latin correctly to have a proper understanding of medieval texts.

The second part of the book presents the legacy of the Summa Halensis in such late medieval authors as John Duns Scotus, William of Ockham, Richard of Middleton, Matthew of Aquasparta, Petrus Hispanus, and Gabriel Biel. The eleven essays deal with such important topics as the theory of illumination, the passions of the will in Christ, Franciscan poverty, the human and divine natures of Christ, and the metaphysics of the Incarnation. They manifest the great complexity of late medieval theology and how these theologians employed and transformed the material from the Alexander corpus.

The volume illuminates our understanding about medieval theology - particularly Franciscan theology- as it evolved in the thirteenth to the fifteenth centuries, highlighting the influence that the Alexander corpus had on many theological/philosophical topics of the later Middle Ages. The concluding essay by Oliver Davies - concerning the correspondence of the Franciscan theology of the Alexander material and contemporary science - highlights the significance of this material and this volume: "To the extent that there is found to be a congruence between contemporary science and early Franciscan thought, as represented by the Summa Halensis, we can legitimately speak of the latter as an authoritative text whose significance goes beyond its own times, reaching even to our own." (397).

This collection of articles not only provides us with a theological-philosophical voice in the past, but also a voice that can still speak to us today.