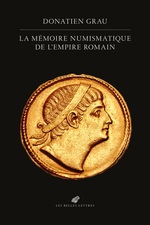 In recent scholarship on Roman imperial coinage, much attention has been paid to examining numismatic messages through the lens of quantification, often attempting to measure their impact. It is in this respect refreshing that in the book under review Donatien Grau goes back to the coin as an object in its own right. In a voluminous study, with a preface by Michel Amandry and a postface by Alexandre Grandazzi, Grau argues for treating Roman imperial coins as a text, written by multiple authors and very self-referential. Stressing the overall comprehensiveness of this 'corpus', he sees in coin typology the perfect means to reconstruct the discourse of power as created by the emperor and his associates. As the title suggests, he puts particular emphasis on the use of coinage for transmitting memory.

After laying down the main aims of the book in the introduction, Grau divides his study by accommodating sixteen chapters in four parts. The first part (46-131) discusses the early phases of imperial coinage in five chronological chapters. The first chapter examines how Republican, imperatorial and Hellenistic traditions were combined into a new coinage that reflected the novelty of the Augustan Principate. The subsequent four chapters deal with Tiberius, Caligula and Claudius, Nero, and Galba. Grau shows for each of these periods how Augustus' experimentation was continuously cited, as the coins of these later emperors, too, were themselves also new ways for expressing the reality of imperial rule.

In the remaining parts, the chronological approach is abandoned for a thematic one. The lengthy second part (134-260) dissects numismatic memory in three chapters. Particularly strong is chapter 1, which lays down the core mechanisms of the transmission of memory through coins. It first shows through the numismatic appearance of Moneta how coins could be self-referential themselves. Then, Grau shows for busts and reverses alike how an iconographic koinè - a conventional repertoire of types and images - had a significant role in the development of coin design, and that innovative typology was generally rooted in such numismatic traditions. After briefly considering how similar mechanisms apply to medallions, Grau ends this chapter by showing how the innovative time of Constantine also heeded Rome's numismatic past. Grau's ideas are generally convincing and sometimes innovative, yet are not always set against existing debates. Especially for the iconographic koinè and Constantine's attention to the numismatic past, the works of C. Noreña and M. R.-Alföldi, respectively, should have been considered. [1]

By means of elaborate case studies, chapters 2 and 3 of the second part shed further light on the ideas set out in chapter 1. In chapter 2, Grau convincingly shows the memory mechanisms at work in his discussion of the continuation of Augustan memory by singling out the sidus iulium and triumphal arches. In the third chapter, however, Grau seems to lose sight of the context of his source material. In the first case study - which deals with the significance of galley imagery - more should have been made of the fact that Mark Antony's legionary denarii were among the most common denarii in circulation until the second century CE. As such, their iconographic impact on later coinage probably went far beyond the mere memory of the former triumvir. [2] Additionally, in the second case study about the iconography of Sol, Grau appears to overlook Trajanic borrowings from the repertoire of his condemned predecessor Domitian, as he links a reprisal of a coin type of Nero to a supposed admiration of Trajan for the latter. Here - and in the study in general - Grau should have left more room for the possibility that engravers or their superiors sought for potent images in previous repertoires without the intent of evoking certain memories, instead of seeing a conscious nod to numismatic memory of a certain emperor in every single type.

Whereas Grau discussed mainly implicit references to numismatic precedent in the second part, the three chapters of the third part (262-340) instead focus on more explicit citations that we find on coins. In chapter 1, Grau rightly underlines the potential to draw parallels between literary texts and imperial coinage by showing examples of coins citing from the literary tradition, thereby showing coinage as part of a wider discourse. [3] Chapters 2 and 3 turn to coins citing coins by focusing on the fourth-century contorniates and the phenomenon of restitution coinage. The part on contorniates convincingly reveals the numismatic memory underlying these objects. What this meant for their actual significance remains to be explored, as Grau builds upon an outdated interpretation of these objects as polemical tools of a pagan aristocracy. [4] More convincing is the discussion of the various forms of restoring coin types in the third chapter, even if the Flavian restitution coins should have been regarded against the background of Vespasian's coinage. Unfortunately, the remarkable attention to coins of the past under this emperor - as previously reconstructed by T. Buttrey - has been left out of the study. [5]

The four chapters of the fourth part (342-426) are probably the strongest part of the book, because they examine the appreciation of coins among the ancients by minutely analyzing literary evidence. Chapter 1 elaborates on the sources attesting to the fact that coins were seen, held and read, thereby treading a domain that has already received some attention in modern scholarship. [6] Less well explored before is ancient thought on associations between coins and the imperial authorities, Roman civilization and memory, central to chapters 2-4, respectively. Grau examines the literary accounts in which these associations appear in detail. Especially his treatment of the highly problematic Historia Augusta in chapter 4 is commendable, as by reading between the lines Grau uncovers the rich and varied numismatic thought of the ancients.

A few minor remarks concern the book's index and use of images. For a book of this length and full of significant remarks about imperial coinage, the index is quite brief and seemingly incomplete. Some much-discussed figures such as Carausius, Tiberius, and Virgil are left out, as opposed to some figures who hardly appear in the analysis. As for the images, especially the first two parts are richly illustrated, with neat juxtaposing of images to occasionally underline similarities between coin types. Captions are, however, lacking, so that the reader is left to sort out the relation between image and text themselves.

With this book, Grau has done a laudable job in drawing attention to the memory practices that underlay Roman imperial coins. His call for making the most of this fairly complete corpus offered by these objects should be heeded, as should his emphasis on coins as memory transmitters. Even if some of Grau's core ideas should have been measured against key publications to a greater extent, the study is essential to anyone subsequently dealing with numismatic iconography and is yet another attestation that coin typology mattered. Far more than being comparable to "the mentality of [modern] post-office officials", as A.H.M. Jones once pungently put it, Grau instead reveals that Roman coinage reflected a far wider-spread mentality. [7]

[2] It is unfortunate that M. Beckmann: The restoration of Mark Antony's legionary denarii by Marcus Aurelius and Lucius Verus, in: The Numismatic Chronicle 177 (2017), 135-147 has not been included in this study, all the more so because G. discusses this restoration in detail.