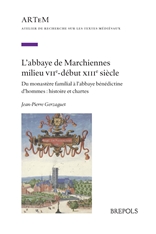 The shell of the Chateau de Gommecourt was briefly, from spring to the onset of winter 1917, the backdrop to the bloody stalemate of the frontline around Arras. Its image was widely publicised at the time as a symbol of the general waste of Flanders' heritage but it can also be connected with a particular tradition, the medieval monastic culture of the region.

For almost a century and a half the chatelains kept custody of a cartulary of the Cluniac abbey of Marchiennes, rescued at the French Revolution by their relative, Abbot Alexis Lallart (d. 1819). The five hundred and fifty folio codex compiled in 1540, probably the largest single-volume charter collection ever seen at the abbey, was obliterated in the artillery barrage. Another of Abbot Alexis' souvenirs, a diploma in the name of Charles the Bald dated 11 July 877, had already passed into the possession of the Départment. It survives still as apparently the earliest parchment original of the acta associated with a foundation which endured for almost twelve centuries, reaching from the age of St Amand (d. 679) to the coming of the Commune and the suppressions of 1792.

The fortunes of the monastery, a landmark of the River Scarpe's 'Boulevard des Moines', can be documented in a corpus of as many as 124 charters, preserved or witnessed in cartulary transcripts, dating between the end of the seventh and the beginning of the thirteenth centuries. Professor Gerzaguet's edition updates the texts and critical apparatus for 103 charters which have been printed before and presents some thirteen, tracing the recovery of the abbey in the second quarter of the twelfth century, for the first time. The sequence establishes a source base from which, Gerzaguet suggests, some of the obscurities surrounding Marchiennes may be clarified: its Amandian origin; the making of its patronal cult of Rictrude; its place in the tenth-century reform of Richard of St Vanne; and its connection to the comital lordship of Flanders.

It opens with a spurious conspectus of the will (645-657) of Rictrude, widow of the warlord, Adalbald, represented as the original patron of the monastery, 'mater mirabilis et bonorum memoria'. The text, interpolated in the Marchiennes Chronicon Polyptycon (c. 1120), signals the imperative of the post-reform monastery not only to claim continuity with a legendary past but also to defend its identity as a community only of men. In fact, before the Ricardian reformation it was indeed a double foundation and three tenth-century acta (nos. 5-7 in this edition), two of which are extant in their original parchments, name the same Abbess Judith (975-988). The reform, initiated at St Vaast in 1008 did not arrive at Marchiennes until 1024. Dual occupation was certainly discontinued while the holy woman Rictrude herself was retained. A campaign of confirmations, dimly visible in three charters (nos. 8-10) forged in the twelfth century, aimed to (re)define a terra sancti Rictrudis.

The absence of authentic acta is surely attributable to a fire in 1043 so devastating that the reconstitution of the convent and its observant life may have been restarted in the second half of the century. New buildings were begun and new property given - a genuine 1089 charter of Baudouin III (no. 11) confirms a seignorial gift - but at the turn of the twelfth century the abbacy was taken by Fulcard, brother to incumbent sieur de Landas. For a dozen years, its income and independence were compromised. In effect, another new departure was necessary and a half-century chain of acta extending from 1120s to the 1170s show the abbots again recovering their domain. After a battle hard-won at the Council of Lagny (1142), the right to free election was retrieved from the diocesan.

Now the foundation was drawn under both comital and papal patronage. Philippe of Alsace (r. 1168-91) is represented in the charters as a constant protector, caring even to eject Étienne, an attorney who had gorged himself on the monks' Christmas hospitality (no. 83; 1167). Innocent II (1130-43), Eugenius III (1145-53) and Alexander III (1159-81) conferred apostolic protection, although only the last of these did not demand the subscription of gold bezants. Security and status were burnished by spiritual confraternity with St Vaast (no. 98) and, even, Cluny itself (no. 107). The Marchiennes customary was marked by the Burgundians' influence.

To the arc of patronage described by the acta Gerzaguet adds contextual detail drawn from other archival and manuscript sources. While it still lacked the dependent priories of some of its peers, now Marchiennes held as many as 12.000 hectares. With its territory prosperous and protected, its population grew, from perhaps only twenty in 1167 to nearing fifty in 1230; there may have been almost half this number of male and female conversi. Observant life elaborated in proportion. A fifteenth-century inventory gives a retrospective view of the rapid expansion of the relic collection and of altar dedications. No less than 100 were documented between 1158 and 1165. After the Benedictines of Canterbury translated the shrine of Thomas Becket (1220) and began a promotional transmission of the martyr's relics, among the privileged recipients were the community of Marchiennes (1234).

Gerzaguet's integration of the wider documentary imprint of the house much enhances the value of this volume: this is itself a form of archive-chronicle, an annal connecting acta, as it were a recreation of the Chronicon-Polyptycon (now Douai, BM, MS 850 (s. XII)) conceived by the monks themselves.