Victoria Rosner: Modernism and the Architecture of Private Life 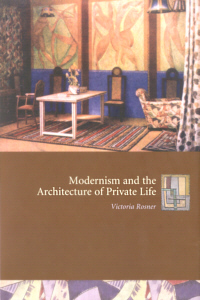 Interdisciplinary scholarship is only beginning to catch up with the activities of modernist intellectuals. These did not always remain within the neat confines prescribed by university curricula. "Renaissance" men and women were not unique to the Renaissance. Almost all anti-establishment bourgeois reform movements in the English-speaking world from the 1860s through the 1920s descended more or less directly from John Ruskin's intertwined social and artistic criticism. William Morris's non-revolutionary socialism was indivisible from his activities as an Arts and Crafts designer, which was in turn spurred by his twinned youthful engagement with painting and poetry. William Butler Yeats grew up in Bedford Park, London's paradigmatic Queen Anne suburb, as the son and brother of painters; his sisters were also craftswomen. What art could accomplish and why was central to the aspirations of poets and playwrights, novelists and essayists, as well as painters and needlewomen.

Ruskin and the Pre-Raphaelites looked backwards with nostalgia towards the middle ages in particular, but already in the 1860s the painter James Whistler advocated an extreme abstraction that was resolutely modern. Whistler's adversarial relationship with Ruskin, whom he famously sued for slander, did not diminish his interest in interior design. Collaborating at times with the architect E. W. Godwin, he designed gallery displays and domestic spaces that harmonized with the spare backdrops of his portraits.

In the introduction to Modernism and the Architecture of Private Life, the American literary scholar Victoria Rosner proposes "that the spaces of private life are a generative site for literary modernism" as well. "These spaces," she argues, "compose a kind of grid of social relations that shifts and slips, often upending the individuals who traverse it. Modernist spatial politics are attuned to architectural dynamics of privacy and exposure, spatial hierarchies demarcating class, the locations and routines surrounding the care of the body, and the gendering of space." She continues, "But if literary modernism is explicitly preoccupied with the structure of private life, it is also shaped by the discourse of space in more subtle ways. The modernist novel draws a conceptual vocabulary from the lexicons of domestic architecture and interior design, elaborating a notion of psychic interiority, to take one example that rests on specific ideas about architectural interiors. Uncovering such discursive connections makes possible a kind of material genealogy of some of literary modernism's apparently autonomous elements. It acknowledges the role of literature in the work of imagining a post-Victorian reorganization of private life to accord with changing social customs. Further, and perhaps most unsettling, it exposes the fundamental role of the built environment in creating the categories we use to organize and understand who we are."

In fact, like most scholars who have no training in architecture, architectural history, or cultural geography, Rosner proves more interested in style than space. Only one of the book's four chapters systematically examines the plan of a space rather than the way in which it is used and decorated. That said, this is an exemplary study of the relationship between artistic and literary experimentation, one that challenges the conventional characterization of modernism as masculine and urban. In Rosner's study, domesticity is re-imagined rather than abolished, by writers who, in the case of Woolf in particular, are simultaneously preoccupied with the new ways of expressing human consciousness. Her first set-piece addresses the relationship between the framing device central to Oscar Wilde's novel The Picture of Dorian Gray and Whistler's innovative frame designs, which she in turn ties to his interior design. Although there are no surprises here for scholars of Whistler or historians of architecture and design, the result is a superlative reading of Wilde's novel, one that has the additional merit of reminding us of issues of which many of the book's original readers were well aware. "Threshholds" considers Lytton Stracey and Virginia Woolf's accounts of the houses in which they grew up, houses permeated with barriers that as adults the writers would successfully cross, but which also contained not so secret dirt that continued to fascinate them. Rosner notes, "It should come as no surprise that Stracey and Woolf have difficulty leaving the past behind, that their most stirring repudiations of their heritage coincide with their most complete reanimations of it." Little of this ambivalence informs the chapter on studies, in which Rosner charts the feminist invasion of what had in the nineteenth century been the seat of masculine authority within the British upper crust dwelling. Her examples, a short story by Arthur Conan Doyle, Radclyffe Hall's novel The Well of Loneliness, and Woolf's classic essay "A Room of One's Own," are astute choices that illustrate a range of ways in which women create places for the expression of their unconventional identities. Rosner returns to the connection between art and literature in her final chapter, in which she masterfully couples back together the Bloomsbury group's artistic and literary activities. The interiors in which they lived and which they exhibited serve as a backdrop for analyses of Foster's Howard's End and a trio of Woolf novels: Night and Day, Mrs. Dalloway, and To the Lighthouse.

The book's title promises slightly more, however, than such a slim volume can possibly deliver. Rosner confines herself to a small set of authors: Wilde, Stracey, Woolf, Hall, and Forster, stand for modernism in English prose. That all five had, as upper middle class homosexuals, strong additional grounds for proposing new modes of domesticity, is not as central to her study as it might have been. Their straight contemporaries, whether allied with contemporary artistic reforms or not, seem more apt simply to condemn the conventions that circumscribed sexual as well as class relationships (Rosner, although attune to the latter, focuses upon the first; the spaces she analyses are almost uniformly genteel). In Dubliners, for instance, James Joyce portrayed the stifling use Victorian, Catholic Ireland made of the city's Georgian terraces. The liberating alternative Joyce himself found on the European continent lies well beyond the scope of his depictions of his native city. And the chasm between T. S. Eliot's evocation of London as "The Wasteland" and Mrs. Dalloway's nearly contemporary rapturous stroll through Westminster suggests the range of modern literary responses to the same environment.

Modernism and the Architecture of Private Life nonetheless illustrates how much is to be gained when literary scholars master the history of art, architecture, and design. Although primarily a reader of texts, Rosner is no novice at visual analysis. Her book issues a multiple challenge to historians of art. First, we should move beyond paradigms constructed upon early twentieth-century continental examples. She reminds us, for instance, of how exciting the Omega Group was, that Voysey's vernacular-inflected abstraction was not the final British contribution to design before the arrival of first Art Deco and then the sterner modernism of the émigrés from Central Europe. This is something of which historians of British painting are more aware than those who focus upon architecture. More importantly, she consistently demonstrates how much is to be gained from a sympathetic, if not uncritical, reconstruction of her subject's worldview. Wilde and Woolf, and to a lesser degree Doyle, Hall, Foster, and Stracey did not merely inhabit interiors, which they then recreated for their readers; they were fully conversant with - and in Wilde's case actively engaged in - efforts to transform. Their writing, Rosner demonstrates, should not be detached from this awareness and the engagement that often followed from it. Rosner's unusually clearly written text should also encourage us to broaden the scope of our inquiries and consider not only literary sources but the ways in which poetry and prose contribute to shifts in the experience of space and place. Finally, we should aspire to match the refinement with which Rosner has crafted this finely wrought work. Modest in scale and apparent scope, like most of the interiors she chronicles, this is nonetheless as brilliantly original a work as the most outstanding of the works of art whose influence upon them she demonstrates.