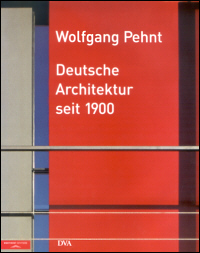 Architecture, houses, humans and their institutions. Of course it also does far more. Its spaces and imagery define experience and propose identities whose forms, if not always their original content, may endure far longer than the fashions in which we clothe our bodies. In few countries over the last century did the appearance of buildings matter to so many as in Germany, where architecture's capacity to literally construct reality was enormously important to a wide variety of public and private patrons on both the local and national levels. But this was never the entire story. In addition to style and what seemed at times its inevitable connection to politics, there are the ways in which new building types, such as cinemas and soccer stadiums, and even the plans of urban districts, participated in as well as mirrored social changes.

Most historians of modern German architecture have focused on the intersection of style, politics, and ideas, trying carefully to tease out what a particular style or architectural theory meant at a particular time, often in order to argue about whether or not it remains viable or is contaminated by unpleasant associations. Wolfgang Pehnt integrates into his magisterial survey, Deutsche Architektur seit 1900, a social history of German architecture and of the architectural profession in Germany that is entirely without precedent. The book should serve as an exemplar for anyone trying to chronicle the modernization of architecture in any country or culture of the past century. As much as Germans argued for and against modernity and about what form it should take, modernization was a fact, and not only in this, one of the most highly technological societies in the world, throughout the era surveyed by Pehnt.

The scope of Pehnt's achievement is, in a superficial sense, quite quickly evident. The book is enormous, with an impressive array of photographs (some of them obviously scanned, unfortunately, from aging slides), and an equally imposing scholarly apparatus. A chronology, brief biographies of nearly three hundred architects, and an imposing bibliography organized by era, building material, architect, and place provide a useful point of departure for anyone who wants to learn more about the subject.

Only a leisurely examination of what so usefully doubles as a reference volume yields an appreciation, however, of its real strengths. The prose is, as those familiar with Pehnt's work published already across the course of more than three decades have come to expect, unusually crisp and clear, making this book as accessible to students or scholars from other disciplines as to specialists. The surprises unfold only gradually, not least because Pehnt's choice of examples in the early sections is relatively conventional. Building upon the work of generations of scholars, these chapters are an impressive synthesis of the state of the field, covering a wide range of examples by architects whose importance was clearly recognized at the time. Pehnt presents competing avant-gardes as well as the meticulously designed alternatives to them that stressed social stability instead of radical change. The second half of the book is far more original. Particularly commendable is the balanced treatment of architecture in the GDR and, above all, of precisely the kind of modernism that is now most out of fashion, the brutalist megastructures of the sixties and early seventies. Here Pehnt is in his element, deftly pairing an account of its own goals against a wry evaluation of its limited accomplishments. He is an equally perceptive critic of the redevelopment of eastern Germany since reunification, including the widely heralded "critical reconstruction" of Berlin.

One of the most welcome aspects of the book is its inclusive scope. Pehnt does not take a narrow nationalist view of his subject, but generously includes foreign architects working in Germany and the work of German architects who have built abroad. Indeed both are critical to his story. At either end of the twentieth-century, Germany provided an unusually hospitable setting for foreign architects. A hundred years ago some of Europe's most radical young talent immigrated there. Olbrich and van de Velde were teachers as well as practitioners. Now architects jet in from the rest of Europe and from the United States to realize buildings that are often more prominent and more interesting than those they design at home. German commissions have been central to the careers of James Stirling, Aldo Rossi, Daniel Libeskind, and Norman Foster. This has, of course, occurred in part because so many Germans take architecture so seriously, but also because it is so difficult for Germans to reach their own consensus about the appropriate appearance of democratic civic architecture. Günter Behnisch was almost certainly more respected abroad in the 1990s than he was by Berlin planning officials. Pehnt is equally attentive to the importance of those German architects who have worked outside of the country's borders. Many were forced by their religious heritage or their politics to emigrate, but today emerging markets like China are as exciting to many German architects as to automobile manufacturers. Without the institutionalization of modern architecture in countries as diverse as Turkey, the British Mandate of Palestine, and the United States, it is unlikely that Neues Bauen would be so central to the story of twentieth-century architecture around the world.

Of course, any such volume has its limitations. Some are Pehnt's and some more properly his subject's. He illustrates very few plans and very seldom describes individual structures in much detail (the analysis of the Kulturforum is a distinguished exception). Instead he focuses on creating a frame in which they can be understood and appreciated. The monumental biography does not include most recent work in foreign languages, such as - to cite just a few English-language examples - Paul Betts, Paul Jascot, Rudy Koshar, and Detlef Mertins. The work of women is almost absent here, as befits a survey of the work of what was for most of the twentieth century, in many other countries as well, a notoriously misogynist profession. There is no built trace here either of the immigrants who have settled in the Federal Republic over the last several decades, no mosque, for instance, to match the ambition of the Neue Synagoge or the Französischer Dom, to cite just two Berlin examples.

Finally, although perhaps it is not fair to ask Pehnt to have managed this as well, the summation of more than a century of buildings designed in or by German architects suggests some broader questions that remain unaddressed in this resolutely untheoretical work. How different is the story Pehnt tells here from that of other western European countries and why? In particular, how has the widespread conviction of the German intelligentsia across the entire course of the twentieth century that architecture can engender social, political, and even economic transformation made aesthetics excellence matter so much here? Across a century when architecture is an increasingly internationalized profession, as Pehnt takes great care to describe, why does it remain so clearly possible to distinguish architecture in Germany and by Germans from the rest of the world? Is it only the lack of a sense of humor, which Pehnt correctly ascribes to the German counterparts of Archigram, or does the legacy of the Werkbund continue to assure architecture and design an unusually privileged position in this culture? If so, how could this be harnessed to ensure the continued international relevance of German architects, who have had responsibility the design of such a modest share of the country's highest profile buildings during the last several decades? A more self-conscious approach to these questions on the part of the entire German architectural community might help ensure that Pehnt's successor, writing at the dawn of the next century, will be in a position to catalogue an equally impressive national commitment to built ideas.