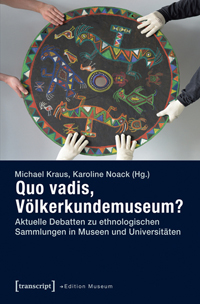 An on-going crisis of cultural representation, informed by postcolonial studies and theories of multiculturalism [1], have in the last two decades ushered in major international research projects and large-scale renovation plans in ethnographic museums across Europe. [2] These have transformed the museum landscape at a remarkable pace whilst redefining the terms of collaboration between academics and curators. Michael Kraus opens this collected volume, dealing more specifically with museums in the German-speaking world, by considering a question of vocabulary that illustrates the uneasy relationship between ethnography as an academic discipline and the museum (10-12). Though the term "Völkerkunde" was for a long time interchangeable with ethnography and anthropology, recent usage has tended to retain the first only in relation to work with collections whilst universities have privileged the more easily translatable term of "ethnography". Rather than use this observation to illustrate a lag or out-datedness of the museum, he asks how these spheres of historically related interests came to function out of sync with each other to such an extent that they no longer use the same words to characterize their disciplinary position.

Whilst the editors have voluntarily sought to avoid caricatured opposition in broaching this subject, the contributions provide important insights on the conditions and limits of museum critique in academia and examine why the use of anthropological theory remains difficult to implement in museographical terms. However, in fine the book is less about diverging or oppositional practices than about what is currently happening in museums to bring both fields of activity closer together again. In fact, this collection attests to a rising wave of initiatives, projects and exhibitions that are related to the professional advancement of a generation of students and young researchers educated in critical museum studies and aware of the colonial roots of their discipline. In a sense this volume documents but also represents the conditions that have presided over the development of a kind of internal institutional critique and the revitalisation of material culture as a field of academic pursuit. Though one might point out that none of the contributions look at the problematic issue of provenance research in relation to ethnographic collections.

The imbrications between ethnographic research and museum work are examined in three movements. Covering a range of positions, the first section is dedicated to an analysis of the more antagonistic aspects of the relationship between the museum and the university but also their dialectical potential. These discussions point to the importance of developing a form of productive critique through an ethnography of the museum and through museum practices that are reflexively aware of the museums own historical position (Noack). As the museum itself and its processes of collecting, preservation and display become in and of themselves objects of analysis, Powroznik's contribution examines the role of the museum and the collection as a methodology that produces distinct forms of knowledge. Museums can also be important spaces for promoting and making the work of ethnographers more accessible to a wider public (Suhrbier) too often more aware of developments in other disciplines related to the museum such as art history or archaeology (Antweiler, 119).

The papers in the second section consider the impact of an increasing level of disciplinary crossover. Collection history provides a renewal of links between ethnographic practices and other fields of inquiry such as natural history (Schultz). Traditional geographic separations between the "West and the Rest" are also questioned, in particular in relation to the current development of the Humboldt Forum (Groschwitz) as well as new participative practices involving source communities (Goede Montalván) and relying on digital technology. Lastly, Kraus considers the interdisciplinary nature of museum critique itself and the importance of carefully situated histories of display and processes of "othering".

The last section provides case studies that consider how complex theoretical positions from contemporary anthropology, such as the ontological turn, and plural perspectives can play out in the museum space (Edenheiser). Efforts to transform the experience of the museum and meaning making practices are documented with more experimental examples from the "Humboldt Lab" (Scholz, Lewy). Elsewhere too the paradigm of the museum as a laboratory introduces a diversification of sensory practices (Lewy) and performances (Seiderer). The volume closes on a contribution that looks at the relationship of influence between local indigenous run museums and European institutions (Slenczka).

The German-speaking world historically played an important role in the development of ethnography and by the end of the nineteenth century the emulative federal structure of the young German nation lead most large towns to found and fund their own Völkerkundemuseen from the 1860s onwards; it thus provides multiple possibilities for the comparison of collection practices and display in national, provincial and university museums. [3] The framing of this volume provides a complimentary perspective to other recent publications more focused on international comparisons. [4] Yet the specificity of the German, Suisse and Austrian cases which appear here as a group could perhaps have been more explicitly articulated, and placed in relation to say French or British museum traditions.

As a discipline, ethnology, like art history and archaeology, developed out of the study of material culture, giving rise concomitantly to the creation of university chairs and museums established in view of housing related collections. [5] Some of the issues inherent to this division between the material and the theoretical are common to all of these disciplines, a fact that might have helped bring out issues related more largely to the nature of knowledge production using material culture and the challenges museums face more generally. [6]

To conclude, the strength of this collection lies in the selection of authors - as it brings together professionals equally imbricated in the spheres of both the academic and the museum world. It provides a focused, critical and thematically highly diverse overview of how the tension between these related spheres is currently playing out. As the title implies, its overall structure builds up to a prospective view of a newfound sense of complementarity that may be cause for optimism for the future of both academic ethnography and Völkerkundemuseum.

[1] Kavita Singh: Museums, Heritage, Culture. Into the Conflict Zone, Amsterdam 2015, 56. "In the wake of post-colonialism and multiculturalism, the right of one culture to collect and interpret another is being questioned." See also Sharon Macdonald: "The Trouble with the Ethnological", in: The Laboratory Concept. Museum Experiments in the Humboldt Lab Dahlem, Berlin 2015, 211-226.

[2] Some recent large academic projects that have strong ties to the museum world and that were dedicated to examining changes in ethnographic museums were: Project RIME, Réseau International de Musées d'Ethnographie (2008-2013); Project Pitt Rivers Museum - The Relational Museum (2002-2006), https://www.prm.ox.ac.uk/RelationalMuseum.html; MeLA, European Museums in an Age of Migration (2011-2015), http://www.mela-project.polimi.it/.

[3] Glenn Penny: Objects of Culture. Ethnology and Ethnographic Museums in Imperial Germany, Chapel Hill 2002; Han F. Vermeulen: Before Boas: The Genesis of Ethnography and Ethnology in the German Enlightenment, Lincoln 2015.

[5] Christopher Whitehead: Museums and the Construction of Disciplines: art and archaeology in nineteenth-century Britain, London 2009.

[6] For a general discussion see Nicholas Thomas: The Return of Curiosity: What Museums are Good For in the 21st Century, London 2016.