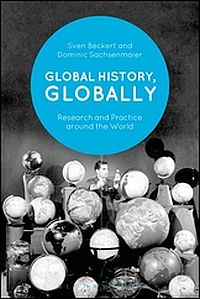 Considering the heavy overrepresentation of German men among its editors, blurb writers, and reviewers (so far), it seems ironic that Global History, Globally has as its chief virtue the discussion of positionality in writing global history. Its slightly triumphalist title is not only a reminiscence of a more innocent boom period of global history when the volume was conceived in a series of conferences in the U.S. and Germany (2008-2011), but also a measure of the field's enormous reverberations. "Global history seems to be everywhere", the editors write in their opening diagnosis (1). This success has compelled historians worldwide to position themselves in relation to it. The conditions, meanings, and consequences of this positioning form the remarkably coherent cornerstone of this book.

Putting together fifteen chapters by eighteen authors who write from and about different world regions, as well as about variegated themes, at first seems to require minimal agreement on what global history is. Wisely wary of entrapment in definitional straightjackets, the editors start permissively: "No matter whether you call it 'world history', 'global history', 'transnational history', or the 'new global history', historical scholarship that operates on larger scales is growing rapidly" (1). But they add three qualifiers to the looseness of larger scales: Global history's affinity with "both connected history and comparative history" (3), its dual hostility to Eurocentrism and nationalism, and a rather implicit demarcation from an older world history, "understood as the triumphant rise of Europe", which in their view has "retained many of its earlier characteristics" (5-6). As befits a volume assembling a multitude of viewpoints, these seemingly lowest common denominators turn out to be not entirely consensual.

There is a whole bloc of thematic contributions for which the definitional quagmires barely matter. Written by some of the most recognizable names in global history, the chapters by Andreas Eckert and Marcel van der Linden on labor history, by Kenneth Pomeranz on economic history, and by Dominic Sachsenmaier and Andrew Sartori on intellectual history all concern the question of how a less Eurocentric, or more global, lens modifies long-held certainties in the fields they deal with. Fluent in the global history canon, succinctly focused on a coherent set of problems, and with admirable argumentative verve, they are also highly useful for teaching purposes.

But the uniqueness of this book - at least if a similar earlier, yet rarely read, volume is discounted [1] - lies in its reflections on how global history is seen and practiced in various world regions. This is also where matters become more intriguingly cacophonous. In contrast to the editors' introduction and Gareth Austin's excellent contribution on Northwestern Europe, which both see the 1990s as the birth decade of global history, most of the regional chapters implicitly or explicitly argue that there is a much older tradition of global history native to their respective regions.

Thus, the late Jerry Bentley's contribution adamantly argues that global history is identical to the brand of world history that has existed in the U.S. since the 1960s. In their chapter on Latin America, Rafael Marquese and João Paulo Pimenta hark back all the way to Bartolomé Mitre - Argentina's president in 1862-1868, who was also known for a Pampean version of Frederick Jackson Turner's frontier thesis - because he wrote a biography of San Martín, who after all famously crossed the Andes (68). The example is admittedly an outlier in a chapter otherwise focused on the Trinidadian Marxist CLR James, Fernand Braudel's Brazilian influences, and famous ECLA economists such as Raúl Prebisch and Fernando Henrique Cardoso. But it presses upon the reader the question of whether the contributors are in effect debating the same thing.

The broader point of these chapters of course is well taken. As Omar Gueye's contribution on Africa makes plain, too, in regions subjected to European colonialism, a purely endogenous history ending at that region's coastlines has always been too obviously chimerical to be entertained seriously - except perhaps for fleeting postcolonial moments of nationalist enthusiasm. But what does this imply for global history as a distinct field or perspective?

One problem is that the simultaneity of global history's discomfort with Eurocentrism and nationalism, central to the editors' definition, turns out to be contingent on the locale of writing. Beyond Europe, a rejection of Eurocentrism can quite naturally flow into nationalism. In a chapter provocatively titled "World History, Nationally" Jie-Hyun Lim bluntly, and persuasively, states that" Asia-centric world history played a role in consolidating a nationalist rationale in East Asia" (252). Much the same point repeatedly shines through in the two Africa chapters and the one on Turkey and the Arab Middle East by Selçuk Esenbel and Meltem Toksöz.

Quibbles over definitions, however, are ultimately as unproductive as they are unavoidable in a volume of this kind, as both editors and contributors ultimately seem to agree. The truly important questions that this book raises in the end have more to do with the asymmetric power structures of global academic production. Put differently: If there indeed was "an earlier and more sustained attention to global history in regions like East Asia or Latin America", as the editors at one point concede, what does it tell us about global history that this "did not translate into a greater presence in the global marketplace of ideas" (8)?

The editors are understandably reluctant to blame only "the size of libraries, history departments, or the availability of funding" (9), but they do not offer many alternative explanations either. Language seems to be an important candidate, if one compares the introduction's almost exclusively English-language references to the Romance-speaking inclinations of the Latin America chapter. Gareth Austin's compelling discussion of the correlation between openness to English-language scholarship and the speed with which global history, as he defines it, caught on in various European countries, also underlines the importance of language. Another possible explanation has to do with the relative recentness of the migration of historians from the Global South into North Atlantic academe, which several contributions mention as a driving force of global history in Europe and North America in recent decades.

Other imbalances, such as the relative strength of historical area studies in North America and (parts of) Europe compared to Africa or Latin America, receive less attention. What does it mean and imply that in, say, Colombia, there are neither resources nor incentives to study Chinese history? And is there something to be said about the problem that, whether in Bogotá or Princeton, Latin American historians are typically assumed to speak for Latin America; an assumption that does not apply in the same manner to Europeans and North Americans? Finally, how does history writing in Eastern and Southeastern Europe fit into any of these discussions?

It would, of course, be asking too much of a single volume to reflect, let alone redress, all these deeply ingrained global inequalities of historiographical production. In breaking up the hitherto North Atlantic-centered discussion of what global history has been, is, and should be, this book broaches important new questions. As the best and most momentous edited volumes should.