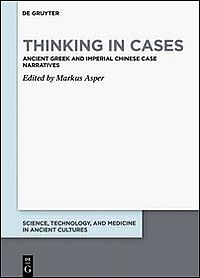 In a pioneering article published in 1996 John Forrester drew a general distinction between two modes of reasoning and explored some of their ramifications in the field of psychiatry in particular. [1] On the one hand there is the familiar axiomatic-deductive mode, which applies general principles to specific or particular instances. On the other much use is often made of the converse move, where the focus of attention is on the particular which often serves as the basis for inferences to analogous cases. We find such 'thinking in cases' in many fields, in many cultures and at many different periods. The present volume illustrates from medicine, from the law and from mathematics especially. Let me first indicate the range and diversity of the materials under consideration.

Medicine, unsurprisingly, is given the most attention, being the topic of four of the seven main chapters in the collection. Susan Mattern focusses on the case records in the Massachusetts General Hospital which she compares with some of the patients' histories we find in Galen. Obviously the situations in which these were composed differ hugely, but points of comparison can still be found notably where case notes throw light on the competitiveness between rival practitioners. Next Lutz Alexander Graumann and Chiara Thumiger compare children and story-telling in modern practice with some of the cases described in the Hippocratic Epidemics. The two final chapters in the volume both discuss Chinese case-histories, at considerable length indeed, Nalini Kirk the medical cases of the 17th century Chinese doctor Xiao Jing and Andrew Schonebaum the 'cases' describing demonological poisoning and cutting human flesh to provide a cure which - whether they existed or not in reality - figure prominently in anecdotes and stories right down to modern times.

But three other chapters cast their net far wider. Markus Asper discusses cases in the extensive materials extant in Greek forensic speeches. Serafina Cuomo queries how far Forrester's distinction applies to Greek mathematical texts found in our papyrological sources. Investigating the hypothesis (advanced especially by Asper in other publications, for example Asper 2009 [2]) that we should distinguish different traditions in our Greek mathematical sources, one more theoretical the other more applied, she acknowledges the usefulness of such but still insists, rightly in my view, on important overlaps between them. Paul T. Keyser proposes to treat the pseudo-Aristotelian text the Problemata as in effect a discussion of individual problems and their proposed diverse solutions. He gives us an authoritative tour d'horizon of the extensive literature in this tradition and in the process emphasises how conservative it generally was in not allowing the puzzling or anomalous phenomena described seriously to threaten the assumed general theories in play. Thus to cite an example Keyser does not use, Theophrastus recognised fire to be anomalous among the four simple bodies but without then proceeding to suggest a positive revision to that theory.

On the one hand, there is no claim, of course, that these selections do anything more than just scratch the surface of the topic, for examples from the chosen subject-areas and from others could be multiplied many times over. On the other, the question that arises is whether the materials chosen for detailed consideration in this volume have enough in common to justify their inclusion in a single collection: wherein lies the unity of this set of studies? Is there sufficient commonality in this material to justify the idea that they are all dealing with 'thinking in cases' in some form or other? If the answer to that question is yes, what light does the collection as a whole throw on how that mode of reasoning operates? Do Forrester's original observations hold, broadly speaking, or only if subject to some serious reservations?

The question of unity hinges of course on how 'cases' are defined. In his introduction Asper focusses first on two characteristics, that cases deal with individuals, either as typical of a rule or exceptions to one, and that they take narrative form. His own chapter indeed deals more with the latter characteristic in Greek forensic speeches. Schonebaum's discussion of poisons and human flesh as therapy also has little to say on individual cases as such. The obvious objection that might be expressed is that almost any piece of writing might be considered in some sense a 'case'.

Nevertheless one of the great strengths of the collection lies in its diversity and in the comparisons and contrasts between ancient and modern examples in different fields and within them from different ancient cultures. Yet some opportunities are missed, for neither Kirk nor Schonebaum offer much by way of comment on the similarities and differences that Greco-Roman sources provide for the particular Chinese practices they discuss.

But let me return to where studies of case-histories have the potential to throw new light on on-going philosophical problems and indeed to go beyond Forrester's analysis. The issue relates to a dilemma that can be put as follows. The case history may give us a detailed, carefully recorded account of a particular event, but every event is unique. The answer to 'if p, then what?' in the title of Forrester's article would then be limited strictly to the unhelpful 'if p, then p'. Until such time as we can establish and not just postulate links with other comparable occasions there will be no interesting lessons to be drawn whether on general laws, or causal relations, or correlations. On the other hand, the very terms in which any description is cast have general import. If we say of a particular patient that she suffered from fever on the fifth day, the term 'fever' itself implies a judgement and already implicitly suggests a connection with other cases classified - however loosely that may be - as such. That does not mean that it is presupposed that all fevers are the same, but to commit to something being a fever is to commit to its having at least a family resemblance to others so recognised, even though - and this is the crucial point - the new instance may cause us to revise our very notion of 'fever' itself.

The evident drawbacks that stem from particularity have not stopped writers moving very freely from the single case to the general, even after Hume especially had made philosophers alert to the problem of induction and indeed ruled out any such procedure as fatally flawed, when judged, that is, by the canons of deduction. Nowadays to be sure we have a new tool to use to extract information from Big Data, namely its statistical analysis, where a probability can be assessed quantitatively and given a value between 0 and 1.

Yet even before the development of such a notion, the attractiveness of case histories sometimes stemmed from the very detail with which they are recorded, allowing those who consulted them scope to follow up different hypotheses concerning the operative factors at work, including (as I noted) challenging elements in the original categorical assumptions used in their collection. It is this element of case-histories, their very open-endedness, that could have done with more attention in this collection. The editor and one of his contributors (Keyser) note that their own papers are themselves case-studies. Applying my point about their open-endedness we may say that they allow us the readers to extend our understanding in new directions - though maybe the contributors could have given a little more guidance on how this is to be done, that is on how conceptual boot-strapping can be achieved in the wake of new experience.

I conclude that the book could have been given a tighter structure which would have enabled some of the underlying philosophical issues to be brought under closer scrutiny. However my admiration for its positive qualities is undiminished, for it is surely very much to be welcomed as offering the reader a feast of interesting, often neglected, data, from both ancient and modern investigations. It has been generally well prepared though some infelicities have not been corrected (read barley for barely on 29, precedent for prededent on 61, we say 'by' virtue of, not 'on' virtue of on 62, 'perimeter' and 'diameter' for 'perimetre' and 'diametre' on 103, black for lack on 158). Nor do I think that the subtitle does justice to the contents of the volume since it makes no mention of the extensive references (in Mattern, and Graumann and Thumiger especially) to modern materials.