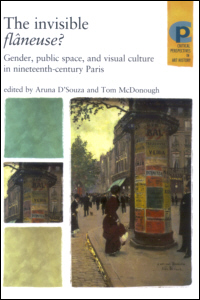 Since Charles Baudelaire's portrayal of Constantin Guys as somewhat of a loner, wandering the streets of Paris, the figure of the flâneur has been a constant one in the visual arts. The solitary, conservatively well-dressed man has no particular aim. His walk through the city is purposeless and he reflects upon what he sees in order to transpose it into art. Baudelaire's construct developed into a paradigmatic subject of modern art - a subject distanced, yet able to perceive and mediate the core of modernity. This subject is interlinked to the development of the modern city. The flâneur has the freedom to explore it in all of its aspects. The subject possesses the freedom of movement, however, and is so defined as male.

Aruna D'Souza and Tom McDonough pose the question as to the female counterpart of the flâneur, the flâneuse. The very notion itself is questionable and is put forward as such. The concept of the flâneuse is presented only to be negated, showing the difficulty of sustaining any one determinate subject in relation to the modern city. While the title refers specifically to the city of Paris in the nineteenth century, the collection touches upon a number of further issues, such as public spaces and the viability of the flâneuse today. There are twelve essays altogether, which developed out of a session from the 2001 College Art Association annual conference. What holds them all together is not the notion of the flâneuse so much as the liminal. This is due to the nature of the flâneur himself, who is, as Janet Wolff writes, necessarily male. It is the male subject who had the freedom to wander the streets alone and at ease in nineteenth-century Paris. Nineteenth-century public space would appear to be a male domain, relegating the flâneuse to the private sphere.

Feminist art and theory have often addressed the dichotomy between public and private, exploring the private as a female space. But Wolff moves beyond this to speak of the "negotiation" of the modern city. The female subject complicates the notion of the modern city. Her space is neither entirely private, nor does it entail the freedom of the male experience. Greg M. Thomas gives the example of the nineteenth-century garden as seen in such images as Edouard Manet's Concert in the Tuileries, 1862. The park offered a public space within the city in which women could also gather. It functioned as an extension of city, a place in which the bourgeoisie public could stage their class spectacle, but it is also pictured, such as in works by Mary Cassatt and Berthe Morisot as an intimate and private space. This private space is also discussed in terms of class by Marni Kessler, who brings it into context of the veil as barrier between self and city. Confined behind the veil, women's urban experience was impeded. She remained within a type of domestic space, which also served to protect her from dust and disease within the city. With the development and modernization of Haussmann's Paris, also came fears associated with the urban realm. Many of these fears proved to be exaggerated or unfounded, as Tom McDonough explains in his contribution "City of Strangers".

Along with the rise of the metropolis and the construction of its narratives, came the temples of bourgeois commerce, the department store; not exactly the ideal territory of the flâneur. Shopping entails a purpose and is thus interested. But, it is also shown in Aruna D'Souza's "Impressionism and the Department Store" as an urban environment in which women could gather alone, a space often depicted as particularly female. The female experience of the city and commerce appear closely interrelated as seen in advertising images. It was acceptable for a woman to walk through the city if she was engaged in a purposeful activity.

The question remains as to the feasibility of the flâneuse. It becomes evident that the concept of the flâneur cannot simply be transposed onto the female subject. But the sustainability of the central male subject is also brought into question. What happens when the flâneur is taken out of Paris? Ting Chang asks this in "Disorientating Orient: Duret and Guimet in Asia." Théodore Duret appears as the archetypal flâneur in Manet's 1868 portrait of him. He is confident, well-dressed and equipped with his walking stick. But as he left for the Far East with his friend Henri Cernuschi in 1871, the two flâneurs became aware of their otherness and were also disappointed at times by the degree of Europeanization in the Asian metropolitan centers. Disappointment and unease replaced their usual confidence. This raises the question as to how specific flâneurie is to nineteenth-century Paris. Duret and Cernuschi lose their flâneur status when in unfamiliar territory and with it a certain dignity.

Queer issues further complicate the traditional status of the flâneur. Simon Leung queers the subject, further questioning our notion of the flâneur's elevated status by concentrating on public toilets and glory holes. His contribution underscores the performative aspect of the entire book as does Helen Scalaway's. The delineation between text and performance is complicated; a fitting method for the discussion of the topic. Flânerie involves an activity whose nature allows no certain experience. It is the contingency of the public encounter that Leung finds exciting.

Sex in public toilets is a possibly upsetting image for those enthralled by the romantic notion of the flâneur. But the strength of The invisible flâneuse? is that it relates experiences of nineteenth-century urban life beyond that of a central subject. The collection of essays brings current theoretical issues to bear upon an historical theme, and further looks to ways in which the flâneuse is pertinent today. In the end the reader is not given a female counterpart to the flâneur, but a richer understanding of the experience of public space.