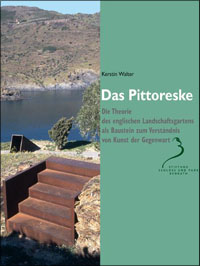 The picturesque calls up a number of connotations and meanings in media from painting to architecture and city planning and on to photography. In terms of contemporary art, the concept of the picturesque, like that of beauty and the sublime, isn't necessarily positive and can bring a work dangerously close to kitsch. The title of Kerstin Walter's book may therefore be a surprise, if only for its simultaneous specificity and openness. In English it translates roughly to "The Picturesque: The Theory of the English Landscape Garden as a Keystone to the Understanding of the Art of the Present". Walter's title is provocative and poses a strong claim. What she offers, however, is a concentrated discussion of the relationship between image, space, nature and architecture. In so doing, the author focuses in on two themes presently discussed anew: the pictorial and the spatial.

For the organization of her monograph, Walter sets up a certain narrative in a tripartite chronology: "The English Landscape Garden" (Der Englische Landschaftsgarten), "The Theory of the Picturesque" (Die Theorie des Pittoresken) and "Art of the Present" (Kunst der Gegenwart). Relating the history of the English landscape garden, the context for the development of the later theory of the picturesque is given. To begin with, the move away from the Baroque garden meant an opening up of the rigid control of space in the English landscape garden through architecture and the use of architecture instead as a visual element in the form of staffage. In its development, however, the English landscape garden moved away from the rigidity of merely picturesque views to a play of existing and momentary "as if" situations. What had been carried out in the practice of the garden was advanced and theorized in the late eighteenth and early nineteenth centuries by figures such as William Gilpin, Uvedale Price and Richard Payne Knight.

An asset of Walter's book is that she juxtapositions her discussion of the picturesque with the reception and application of the ideas associated with it in modern and contemporary art theoretical discourses. The writings of theorists such as Nikolaus Pevsner, Rudolf Arnheim, Rosalind Krauss and Yve-Alain Bois are thematized in the explications of the picturesque. Pevsner dealt with the picturesque in a series of articles in the 1940s in which he emphasized the properties of irregularity and fantasy. He further saw a relationship between modern architecture and the picturesque through the attention to the givenness of a topographical situation in architectural construction (43-44). In the early 1980s, Krauss saw a common emphasis on copy, reproduction and fragmentation in the art of the present and in concepts of the picturesque, while Bois perceived the picturesque in Richard Serra's expansion of the sculptural beyond a thing in itself to a thing open to the recipient offering endless relationships (90-91). Walter's general critique of the use of concepts of the picturesque in contemporary art discourse is that it is treated as a coherent strategy and the English landscape garden as a unified phenomenon, while in fact the terrain was quite varied. Knight, for example, stands out in his argument that the perception of the picturesque exists through association, rather than intrinsically in the landscapes themselves. Interesting in this context is the increasing role of tourism in the eighteenth and nineteenth centuries and the development of image-based perceptions of nature. Both the experience of travel and knowledge of painting would thus add to the "as if" affect triggered in the material form of the garden landscape.

Through multiple associations, the variety of views and the play between illusion and reality affected in the picturesque, the recipient as self-conscious subject in movement in space indeed positions a role taken up in post-modern aesthetics. Walter defines this situation of self-awareness in space in the concept of kinesthesia and Rudolf Arnheim's formulation of the feeling of a displacement in the environment due to contextual frame (27). So at the point that Walter turns to the art of the present, she has already set a ground for the relevance of approaching it with the theoretical implications of the picturesque in mind. She explicitly rejects any claim that the artists she discusses would like to actualize the theory of the picturesque or that their work may be regarded as such. Her goal rather, as she states it, is to explicate how the English landscape garden in the eighteenth century and the consideration of its theoretical basis and intents may be revealing under certain circumstances for dealing with the art of the present. Five works are discussed: Museum Insel Hombroich by Bernhard Korte, Erwin Korte et al., Spiral Jetty by Robert Smithson, Elevations for l'Allée de la Mormaire by Richard Serra, Passagen, Homage to Walter Benjamin by Dani Karvan, and Guggenheim Museum Bilbao by Frank O. Gehry. This selection proves the feasibility of applying the implications of the English landscape garden to an understanding of art in the present, especially when those works address space, time, movement and the relationship between nature and culture.

The subtitle's overly ambitious suggestion that English landscape garden can be a keystone for understanding the art of the present is somewhat more differentiated in the presentation of the works. In the end, the text leaves one wishing for a further discussion of the value of nature in contemporary culture and the media through which images of nature are transmitted and defined. Das Pittoreske's strength is its emphasis on the development of the English landscape garden in practice and theory together with its reception, development and implications in twentieth century art discourse.