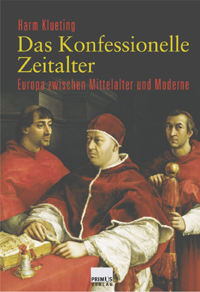 Historians struggle to organize the relationship between time, place and subject. The nature of Harm Klueting's ambitious project means that he has had to struggle harder than most. His introduction makes it clear that his initial text was nearly twice the length of this present book (which has 379 pages of text). It is, of course, not unknown for authors to have to undertake radical surgery on their manuscript, but it is a painful process. The author wants reviewers to know that he had so much more that he could have said: please understand!

It is easy to grasp why the production of what is still a substantial book, and one which has apparently been many years in gestation, has evidently caused such difficulty. Inter-related problems of boundary drawing have abounded. The first concerns time. The author has had to revisit both 'the end of the Middle Ages' and 'the beginning of Modernity' to find a timeframe with which he feels comfortable. It scarcely needs to be said that these are matters on which pronouncements have long been made. Klueting gives them respectful attention. He writes as a German and knows how much weight might be placed on 1517. He is also aware, however, that that year's epoch making significance may pass other countries by. And here is his problem. If he remains within the lines of a national historical or historiographical tradition, he can perhaps find other reasons to settle on or around such a date. However, his intention is to escape from any such limitation. He wants to find a transition point which 'makes sense' for the scale of the enterprise which he wishes to undertake. He wants to write about 'Europe'. So he lands, immediately, into his second problem of definition, a field again well-populated by historians (and contemporary politicians). Is the 'Europe' which he wants to write about to be one as defined in the present, however contentiously, or one perceived, however dimly, in the sixteenth century? And, of course, there is always 'the Russian question'. Here the author declares himself to be generously ecumenical. His Europe is going to be as capacious as possible. Amongst his doctorates, the author has one in Slavistics. It is no surprise, therefore, to read that in the writing and research for this book the author has found himself working in many parts of Europe, from the British Isles to Romania. The bibliography - and an even lengthier one which he has published elsewhere - testifies further to this aspiration to comprehensiveness. Yet , as the author recognizes, the wider his 'incorporation' the more difficult it becomes to settle convincingly on 'turning points' both at the beginning and end of a notional 'period'. This tension is inescapable but compounds the difficulty of creating an appropriate structure. An initial section discusses the issues which have just been alluded to. Four further sections deal respectively with the two centuries before the Reformation, with Reform (broadly interpreted), with the 'Konfessionelle Zeitalter' and then with the transition from the latter to the Enlightenment. The lengthiest and weightiest is the third. The last, which includes the discussion of magic, atheism, the 'scientific revolution' and the emergence of a certain confessional irenicism, totters a little uncertainly into a concluding briefly characterized 'Enlightenment' (with a free admission that its chronology in England and Germany was very different).

Such treatment necessitates extensive further internal sub-division as we hop around Europe from Moscow to Portugal, from Edinburgh to Novgorod, with many places in between. Given such a range, it is inevitable that the treatment of particulars can only be summary. One might question an emphasis here and there but great care has been devoted to balance as between different regions and then, in the heart of the book, between different church traditions as confessionalization proceeds. This sense of a continent in dialogue - albeit in many cases a rather distant and by no means tranquil one - is enhanced by a comprehensive timetable after the main text (of fifty pages) extending from 1309 to 1731 indicating what are judged to be significant events in very different parts of the continent. Any author who attempts a book of this kind knows that specialists will always be ready to pounce. This reviewer, however, judges that behind the succinctness of summary lies a weight of scholarship.

It is, however, not in the range it attempts, impressive though that is, that this book makes its mark. It is in the fact that it very deliberately sets out to cross borders in another way. The author holds academic posts in which he teaches both 'general history' and 'church history'. He knows very well the assumptions which can often lie behind both traditions. Putting it crudely, one might be tempted to marginalize, or be reductionist, in relation to religious/ecclesiastical issues, while the other might be so concentrated upon dogmatic or ecclesiological questions as to miss the significance of their social, cultural, economic or political context. Klueting places his feet very firmly in both camps and resists categorization. In addition, it would appear, he has himself switched his own confessional allegiance, and has thus seen 'from within' how boundaries of difference are drawn. He would like his book to have had Religion, Church, Politics and Material Culture in its title and thus given an even clearer indication of his intentions. So, there is a refreshing and invigorating concentration throughout on the interlinking aspects of the developments which he describes. New religious ideas have both intended and unintended political consequences. New ideas of state-building have both intended and unintended ecclesiastical consequences. There are no simple linear drivers of change but rather, both in acceptance and rejection, a set of constantly interpenetrating developments. The benefit of the panorama which the author presents is that we can see in detail how the alignments shift from country, particularly as 'confessionalization' proceeds.

Klueting is not the first nor only historian to attempt this kind of 'total history' and built bridges between different historiographical traditions, but he has done so with sophistication and success (even if, for publication, he has had to rein in the scale of his enterprise). He takes note, at various points, of climate change as one amongst the many relevant factors with which he is concerned. In a metaphorical sense, his work may be seen as an indication of a certain climate change in the consideration of how time, place and subject should be integrated.