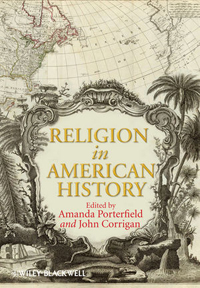 The editors present their book as a kaleidoscope, with four sections, each in turn divided into four parts. The sections are chronological - from 1492 to the present - and each is given a title which attempts a broad characterisation of the era under review (for example, the Atlantic World (1692-1803)). The four parts in each section are concerned, in sequence, with the following topics: politics, cosmology, community and practice. Readers are told that they can either read each section through in chronological order or read one part, and then another, through the sections. Readers who take the time to read the book both ways, or indeed in any combination of ways, are promised that they will derive additional benefit. The editors have enrolled a collection of sixteen scholars (all American) to carry out this enterprise. They occupy professorships of religion/religious studies/religious history in a variety of universities across the United States.

The editors make it clear that this structure has been carefully designed to give expression to the conviction that underpins the volume, namely that they expressly want to avoid a mono-narrative in order to bring out multiple patterns and perspectives. Their constant emphasis, expressed by their contributors, is on the interplay of religious traditions within particular social, political and cultural contexts. They argue that religion has always been a major force in the Americas but stress that it has both contributed to centrifugal forces of diversity, fragmentation and factionalism and to centripetal forces of union and cultural homogeneity. It cannot be neatly pigeon-holed. The tension is always there. They further claim that theories about the incompatibility of religion and secularity have been wrong, especially when applied to the United States. What has happened, they suggest, is that religion has become more fluid, interchangeable and accessible. They note what they call an escalating interest in the practical benefits of religion alongside a declining interest in systematic theologies. Some minds, perhaps particularly European minds, might suppose that 'religion' so conceived was being emptied of intellectual coherence. The editors, however, want to marshal their contributors behind a different approach. They eschew trying to impose an abstract definition of religion as a prelude to the study of religion in American history. They imply, rather, that what 'religion' is constantly changes over time and is best concretely encountered in particular places, amongst particular people, doing particular things. Religious behaviour and thinking must always be placed within larger forces of social and intellectual change. This emphasis is what gives this volume its rationale, coherence and attractiveness.

There is nothing fundamentally novel in these assertions and their validity, as general propositions, could only be explored in a rather different work of history, sociology or theology. It is, however, the fact that this approach is so clearly embodied in the structure which gives this volume its usefulness, particularly for students who might have been reared on a rather straightforward meta-narrative of American religious history. How, in turn, particular contributors package their understandings of 'politics' or 'practice' naturally varies - it will be obvious from what has been said earlier that there are different contributors on these themes within each of the chronological sections. Contributors on 'Politics', for example, take the reader down some fairly well-known questions of 'church' and 'state' but range much more widely. Politico-religious understandings still reflected original European antecedents and understandings but in America itself, colonists, confident that they had been entrusted with the land by a God who approved of their piety joined what is described as a sense of cosmic destiny to a programme of inspired political consolidation and continental domination. In the final section, however, the contributor deals with even greater religious plurality and the challenge it poses to deep-seated notions of the 'essence' of American life. At the beginning of the twenty-first century, Christians still constituted the largest cluster of religious Americans but, probably, for the first time, Protestants formed a minority of the nation. In the United States, as elsewhere, politicians struggled to find a vocabulary that reflected anything like a national religious consensus. 'Pluralism', its meanings and implications, naturally also features both in 'community' and 'cosmology'. What was once thought of in terms of a 'melting pot' is now better conceived, we are told, as a multicultural bricolage. The contrasts between such articulations in the final section, and the pictures being drawn of earlier centuries, stand out, unsurprisingly, but from the very first two centuries of 'Exploration and Encounter' there was an inescapable kind of pluralism about America by virtue of its being a 'new land'. It is a great virtue of this volume that the reader can be thinking both thematically and chronologically. Inevitably, however, no author would wish to claim, in a twenty page contribution, that the last word has been said. Given the country's scale and its religious diversity, it is no mean task to produce persuasive syntheses, but this has generally been done. 'Further reading' is provided at the end of each contribution. Illustrative material enhances the text.

This volume is therefore not a distillation of the complexity of American religious history by a single mind. It does not claim to be a new definitive narrative. Its emphases, however, do open up fresh angles in approaching old questions. This reviewer has shaken the kaleidoscope in various ways, each time with benefit. Other readers will use the volume differently, but all are likely to do so with profit. Whether, after the kaleidoscope had been sufficiently shaken, it will be possible for scholars to produce single volumes which encapsulate 'the religious history of America', in the kind of multidimensionality expressed here, remains to be seen. The challenge thrown down by this volume is there to be picked up.