György Péteri (ed.): Imagining the West in Eastern Europe and the Soviet Union 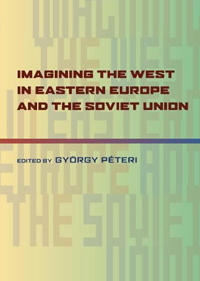 This volume edited by György Péteri significantly raised my spirit by showing that the contemporary history of Eastern Europe can be an area for fruitful research from culture and social history despite of the currents in historiography of this region. In this volume the reader will not find a continuation of recent discussions concerning conjectures of the collaboration of members of political opposition in Eastern Bloc with state secret services. Studies gathered in this volume are far from positivist discussions that aim to discover "historical truth". As Péteri claims in his introduction, this book aims to reconstruct the process of "mental mapping" (2), that is shaping of cultural constructs linked with specific geographical spaces. In the last decade, two important books [1] on the "mental mapping" of Balkans were widely discussed not only in academic circles. These volumes reconstruct the process of the construction of images of the Balkans among the elites of Western Europe. Péteri's volume fills the gap by showing that for the inhabitants of Eastern Europe the West, that is Western Europe and the United States, was as exotic and fascinating as the Balkans were for Western travellers.

Péteri as well as most of the contributors of this volume are well known scholars who have significantly contributed to the field of cultural history of the Cold War. In ten essays from diverse academic disciplines, the authors describe the role of the West in social and cultural processes in Eastern Europe in the whole XX century, however, most of the authors deal with the post World War II period. In-depth analysis of the role of "the West" as a cultural construct in the state socialist countries is the main topic of the volume. This construct played a crucial role in "state socialism's drive for exceptionalism and modernity", as Péteri puts it in the introduction (4). The authors describe in theoretically grounded and empirically based studies the role of the West as a "powerful referent for the communist world" (262). As the motto of the book I can quote a question raised in Susan E. Reid's text on the American National Exhibition in Moscow in 1959, famous as a venue of the Kitchen Debate between Nikita Khrushchev and Richard Nixon: "How the Cold War as conflict of images of modernity and the good life, shape everyday life of ordinary historical subjects?" (196).

The term "modernity" is one of the most frequently used words in this volume and according to the authors it is the key for understanding cultural processes in the Eastern Bloc. Articles on the post World War II period convincingly show that the policy of decision makers from communist parties in Eastern Europe was not merely a practice of introduction of Karl Marx's and Lenin's ideas into state policy. According to the contributors, state policy was rather a constantly negotiated discursive practice which aimed to reach the state of modernity.

Especially Reid and Greg Castillo discuss in well contextualized articles the wide application of this term. It was used to describe interlinked cultural, social and technological changes in Western Europe and the United States in the first half of the XX century. Aside from the development of mass communication, transport infrastructure, as well as car and plane industry, modernity also encompassed such issues as social welfare, leisure and consumer culture.

The aim of establishing a regime of modernity in the less developed East European countries based previously on agrarian economy was one of the crucial goals which communist decision makers tried to reach with the help of experts. This agenda was symbolized by the omnipresent slogan "to catch and overtake the West". The authors on diverse case-studies reconstruct how politicians, engineers and artists tried to appropriate the experience from the West in shaping the socialist modern order and avoiding mistakes which in the opinion of policy makers and experts caused Western Europe and the United States to become an example of failed modernity.

On the other hand, the authors also show how inhabitants of the socialist bloc tried to "catch up with the West" on their own, for instance by permanent or temporary emigration (see Paulina Bren's chapter on the Czechoslovak Normalization). Another opportunity of catching the West, if emigration was not possible due to political constraints, consisted in watching or collecting material artifacts from beyond the Iron Curtain. For instance, one could visit the American Exhibition in Moscow to see the "Miracle Kitchen" or simply proudly present empty Western perfume or alcohol bottles in the most exposed place in a flat.

The authors also discuss critical approaches toward the West. For instance, Barbara Walker (chapter 11) reconstructs the ambiguity of approach of dissidents in the Soviet Union towards Western journalists. In samizdat publications quoted in the volume one can also find criticism of the Western cultural wasteland symbolized by discothèques and the fashionable Adidas clothing brand (190).

The ten articles collected here provide an attractive perspective of the research in the field of contemporary social and cultural history of Eastern Europe. Actually, this is one of the most important volumes on the cultural history of state socialism that I have ever read. This book is a must read for scholars interested in the history of Eastern Europe in the XX century. In the footnotes one can also find an extensive up-to-date bibliography on the historiography of Eastern Europe as well as the concept of modernity. However, the articles gathered in this volume are written by scholars from diverse academic fields. They also cover different epochs. Most of the contributions deal with the postwar history, however, the first two chapters concern the end of the XIX century and the interwar period. It is difficult to imagine a single reader who will be able to read carefully the whole volume due to the heterogeneous academic approaches as well as time periods. Besides, what struck me is the fact that aside from Péteri all contributors are Westerners. I hope that one day I will get my hands on a similarly excellent volume on Eastern European social and cultural history with a substantial number of contributions written by scholars from this region.