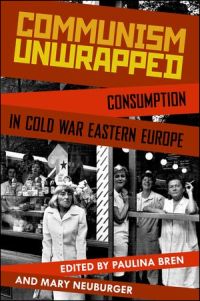 This volume provides fifteen excellent essays on various cultural, economic and political aspects of consumption in state socialism. It is generally agreed upon that contemporary research on practices of consumption was influenced by Style and Socialism and Socialist Spaces, two highly acclaimed volumes on material culture and aesthetics of everyday life in communism.[1] "Communism Unwrapped" is a significant step forward to better understanding of the history of postwar Eastern Europe. The essays focus on two particular aspects of consumption practices. The first is a social history of particular commodities such as coffee, tobacco and alcohol in the context of "actually existing socialism" and cultural practices related to these products. The second issue is the development of systems of distribution of consumer goods and services as organized by the state apparatus or by citizens within the framework of the informal economy.

In most academic and popular books on the history of postwar Eastern Europe, the state is frequently discussed as an apparatus of repression for which power over people's lives is the ultimate goal itself. One of the greatest strengths of Communism Unwrapped is that the essays as well as the informative introduction by editors Paulina Bren und Mary Neuburger successfully challenge this image, showing that one of the most significant agendas of state policies was to develop complex systems for providing citizens with a "good life". This imaginary "good life" was equated with access to good quality and aesthetically appealing commodities as well as convenient access to services. In discussing such systems, the authors show how several factors such as political constraints, corruption, or bad economic planning laid bare the shortcomings of these distribution systems.

Weaknesses of such state-organized systems led to the development of informal economies frequently referred as "economic pathologies" in media discourse, where commodities were offered outside of the organized state system. The history of shadow economies discussed in the volume is not a simple heroic history of creative entrepreneurs who successfully applied their trading skills; it is also a history of abuses of official distribution systems by such entrepreneurs who managed to get access to official distribution channels, bought up commodities and sold them at much higher black market prices. The last chapter on Polish trade tourists in the GDR by Mark Keck-Szajbel provides a suitable epilogue for the book. This essay discusses how Polish authorities encouraged citizens to engage in trade tourism and travel to the GDR to acquire consumer goods from German stores. Behind this strategy for coping with domestic shortages was a more structural context of abuse of the state distribution systems. This example also shows a common trait of all distribution systems discussed in the volume, namely the symbiosis of state distribution systems and informal economies. For instance, the success of Czech veksláks discussed by Bren as well as their Polish cinkciarze counterparts was only possible because of the state Tuzex and Pewex hard currency department stores that aimed to collect convertible currencies from citizens who earned these abroad.

In her detailed study of American economic influence on the lives of Europeans in the 20th century, Victoria de Grazia shows how American salesmanship steadily replaced traditional European systems of distribution of commodities on the market.[2] Communism Unwrapped shows a different world where state-organized systems of salesmanship existed in a symbiosis with informal economies. By demonstrating how different consumer cultures existed on both sides of the Iron Curtain, de Grazia's work combined with Communism Unwrapped help us to better understand the differences between the postwar cultural histories of both halves of Europe.

The book also has another excellent feature. Besides its excellent academic qualities it provides highly enjoyable reading. The popularity of the history of consumption and advertisement in recent years has been fueled by the highly acclaimed television series Mad Men. Communism Unwrapped, which covers for the most part the same historical period as Mad Men, is a "mad men socialist style", highlighting state-owned company managers, advertisers and representatives of state institutions tasked with shaping the practices of consumption and tastes of socialist consumers. One of the most entertaining episodes in the book is provided by Mary Neuburger in her study of the tobacco industry. While discussing marketing strategy of Bulgartabak company she describes a focus group study that included several Czech chain-smokers with the deputy minister of trade, who were asked to judge the taste, quality and "smoking experience" of cigarettes provided by Bulgartabak (91).

The essays in Communism Unwrapped are very diverse; not only do the authors cover virtually all of Eastern Europe in their studies, they also cover various aspects of consumer culture is state socialism: state policies, development of consumer infrastructure as well as cultural practices of consumption of particular commodities. The essays are based on extensive academic research, including archival research and interviews with witnesses. This volume will help to establish a trend in social and cultural history of Eastern Europe and we can expect more studies on consumer culture in this region in the future.