Rachel Feig Vishnia: Roman Elections in the Age of Cicero 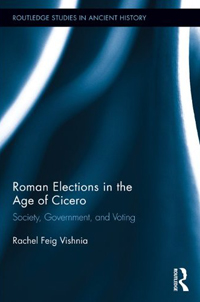 Despite its title, elections are only a minor part of this book; its first three chapters offer a general introduction to Roman Republican political life. According to the preface it is a revised version of the author's monograph, published in Hebrew in 2008, on elections in the late Republic (which this reviewer has not seen). This English-language revision is explicitly 'designed as a teaching aid' (ix), and its clear and accessible style will undoubtedly make it attractive to undergraduate students. Nonetheless, the very general material in the opening chapters sits uneasily alongside the more detailed analysis of elections presented in the final chapter: this is a book with two separate and unreconciled audiences, and it is only in the final chapter that serious researchers have cause to engage with Feig Vishnia's work.

The opening chapter, 'Historical Survey', offers a brisk narrative of Rome's political history from its foundation to Caesar's crossing of the Rubicon. Feig Vishnia deftly avoids entanglement in the problems of early Rome, and we soon reach the familiar if questionable story of an impoverished peasantry, latifundiae, increasing social tensions and the Social War as the product of an allied desire for citizenship. The intense and ongoing debate on demography and land in the work of Rosenstein, Scheidel, de Ligt and others, and Mouritsen's take on the origins of the Social War are among the aspects of current research here ignored. Even within the constraints of a narrative written for students, this is a disappointingly meagre treatment.

Chapter two, 'Roman Society' catalogues and explains the different groups within Roman society. Rather confusingly, the opening remarks (31) do not distinguish between objective differences of status and other distinctions in occupation, but the discussion itself is clear and helpful and the chapter as a whole provides an excellent glossary of basic terms. Chapter three, 'Principles and Structures of Republican Government', handles magistrates and assemblies after a brief discussion of the term 'republican'. Tacitus Ann 1.3 is brought in to chart the emergence of the Republic in distinction to the Principate (60-61), but Feig Vishnia takes his evidence at face value; the possibility that the very distinction is the product of the first century AD is not countenanced. And there is no reflection on the dangers inherent in the task itself of writing down 'the Roman constitution', in terms of its inherent assumption that we are dealing with a rule-based system. The negotiation involved in Roman Republican politics - that what is permitted is definable as what a man can get away with doing - is largely obscured.

The final chapter, 'Elections', concentrates on the final two decades of the Republic, the period of the commentariolum petitionis, which featured more heavily in the book's first version (ix). Here Feig Vishnia offers detailed and stimulating consideration of the ballot laws (129-134) and of bribery (134-148). Not all of her suggestions will necessarily commend assent (e.g. that the leges tabellariae were designed to promote the administrative convenience of counting written ballots, rather than to ensure secrecy) but they demand a response. Feig Vishnia is particularly strong in showing the ways in which the extension of citizenship after the Social War disrupted and radically altered the modes of engagement between candidates, and by extension the elite, and the electorate. The depth of our ignorance about the practicalities of elections also emerges strikingly from her careful presentation of the evidence. A point in question is the number of candidates whom voters marked on their tablets (120). Feig Vishnia suggests only two, regardless of the number of vacancies to be filled - a procedure which would have considerable potential to generate unpredictable results in elections dealing with a greater number of offices than two. The correct answer to the question is not without interest. But what does the fact that no ancient author mentions the procedure tell us about the priorities of those who tried to control electoral outcomes?

The nature of a project of this kind inevitably leads to simplifications; some are potentially misleading (e.g. p.59, where a passage of Cicero's de re publica is offered as a direct quotation from the elder Cato; p. 67, implying July elections for the consulship rather earlier than they are attested as the norm). The standard of presentation is generally high, though there are missing cross-references on p.32.