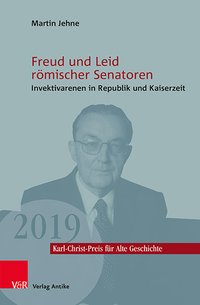 This short volume records the 2019 award of the Karl Christ Prize for Ancient History to Martin Jehne. It joins three other volumes in this series, all published by Vandenhoeck and Ruprecht, commemorating the prize's bestowal on Wilfried Nippel (2013), Mischa Meier (2015) and Elke Stein-Hölkeskamp and Karl-Joachim Hölkeskamp (2017). Like the earlier publications, this contains a brief biographical note on Karl Christ and a laudatio of the awardee in addition to the paper that Jehne delivered on the occasion of the prize's award in April 2019 (27-64). There is also Jehne's bibliography, and some pictures of the celebrations in Bern in 2019; writing this review in the final days of 2020, these are charming but also rather desolating images of a sociability that we must hope we will soon regain.

It may seem unfair to dedicate a book review to what is a long-ish article, but this piece can sustain that level of scrutiny, as the contribution is, in effect, a tour d'horizon of the research that Jehne is conducting under the aegis of the project Invektivität. Konstellationen und Dynamiken der Herabsetzung (SFB 1285) at TU Dresden, as Principal Investigator of the Ancient History strand. (Full disclosure: the reviewer has participated in activities relating to the classical literature strand of the project). As such it gives an early and exciting glimpse of the research's direction of travel.

Jehne's interest is in invective as communication, involving a triad of the person delivering the invective, the person receiving it, and the audience. This focus on action and process, rather than on the content of the invective itself, has generated the overall project's neologism Invektivität, for which the English equivalent is presumably 'invectivity'. For Jehne, that means attention to where and how invective occurred in the late Republic and early Empire, and to the parameters (its 'rituals') within which it took place. Here, he explores these questions through detailed consideration the engagement between Cicero and Clodius, from Clodius' trial and acquittal in 61 down to the early months of 56 when the two men clashed over their interpretation of the haruspices' deliberations. Jehne sees in the invective between the two men an escalation towards a 'point of no return' with Cicero's exile, played out in front of a variety of audiences which at different points and in different ways favour one or the other of the two men. Thus Clodius' capacity to use contiones as locations for invective against Cicero is closely connected to his tenure of the tribunate of the plebs, yet in the following year at a theatrical show he is exposed to hostility from an audience which he cannot avoid.

Even the brief sketch that Jehne offers here suffices to show the opportunities created by his systematic approach to analysing invective as communication in specific places and between and in front of specific peoples and groups. The significance of details becomes apparent. Jehne is very good on the collective anonymity as well as the theoretical hegemony of the Roman populus in the Republic (as he notes, the early Empire is in this respect a very different world): their opprobrium is impossible for members of the elite to counter, on the occasion of its delivery, whereas a senator's remarks can be met with, and perhaps overcome, by a sufficiently weighty, or witty, response. He is also acute in his observations on the potential of invective not to matter: individual members of the elite seem to have been able to move beyond attacks by their peers, in ways that suggest not that such attacks did not matter, but that they could be countered or outweighed by other factors, not least friendship with third parties. This background focuses our attention on why such rapprochements and patchings-up did not occur for Cicero and Clodius: what happened, to mean that their invective was transmuted into implacable hostility? Something rendered a pacific outcome impossible in their case, despite the amicable relations which appear to have existed prior to Clodius' trial, or at least prior to the alleged sacrilege.

Jehne does not here fully address that conundrum. It is not really clear whether he thinks that invective was a symptom of the two men's enmity, or its cause; and more broadly, the relationship between the origins of inimicitia and the articulation of contumelia awaits unpicking. But what Jehne has certainly established in this valuable contribution is a framework within which that issue, and many other related questions of invectivity, can be usefully pursued.