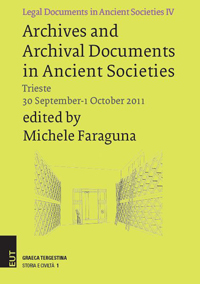 This book contains the papers (mostly in English, but three in German, two in Italian and one in French) from a conference in which the research group on Legal Documents in Ancient Societies focused on archives. After an Introduction by Daniel Kehoe, which considers the ways in which archives and archival material can be studied, it has four sections each comprising three substantive papers and an introduction or conclusion: on the ancient near east, classical Greece, Persia and the hellenistic world, and the Roman Empire.

The section on the ancient near east begins with an introduction by Sophie Démare-Lafont, on the fate of documents in antiquity and more recently, and on the importance of knowing the context of documents. Klaus R. Veenhof analyses the archives of trading families from Kanesh in Anatolia, an outpost of Assur. Antoine Jacquet studies the comparable family archives from the Old Babylonian period. Susanne Paulus surveys the Middle Babylonian archives, mostly from Nippur, and notes that documents for the sale of real estate are rare because land was commonly granted by the king and recorded in different ways.

For classical Greece Christophe P&#233barthe argues that there is no link between writing and a particular kind of régime, and shows how Athens' subsidiary units, particularly the demes, with their records supported the functioning of the city as a whole. Shimon Epstein compares Athenian building accounts for three periods in the fifth and fourth centuries, asking why the differing details in them were included and what information will have been available. Edward Harris emphasises the importance of the plaint, the formal document on which each Athenian court case had to be based, and stresses that these and the verdicts will have been retained afterwards. Michele Faraguna in summing up emphasises the religious aspect of the building records, and the dispersal of Athens' records in different offices.

The next section combines the Persian tradition and the hellenistic world. Ingo Kottsieper insists that only documents known to have been kept together can be considered as an archive, and studies particular archives from Egypt and from near Jericho, all kept for their usefulness in a particular context. Laura Boffo studies the various ways in which the kings affected the procedures and the documentation of the hellenistic cities. Lucia Criscuolo suggests that in Ptolemaic Egypt many rough documents considered to be drafts are more likely to have been office copies made after the original document had been finalised. Mark Depauw ends the section with reflections on archives and public and private life.

The last section deals with the Roman Empire. Eva Jakab introduces it with remarks on anxieties about forged documents and on increasing state control in various areas of life. Kaja Harter-Uibopuu discusses two fragmentary decrees of Cos and uses manumission documents from Delphi and grave regulations from Asia Minor to illustrate the involvement of official bodies in private affairs, and to argue that the officials in charge of archives not only preserved documents but helped in their drafting. For Egypt Thomas Kruse studies the documentation involved in registering inhabitants as members of the privileged classes. Rudolf Haensch argues for an optimistic view of the extent of officials' archives in the Later Empire.

Uri Yiftach-Firanko provides the book with a Conclusion. Many archives can only be inferred from texts which refer to them or depend on them; archives could be destroyed either by being broken up in antiquity or by being neglected by excavators. Between official and private archives we should recognise a third category, of "communal" archives, kept for a community by one of its leading members. In the Greek and Roman periods we can trace increasing supervision by the state of private legal activity.

In this book specialists have written chapters on their own regions and periods, and no reader will be expert in all of these. Some authors have directly addressed broader questions, while others have concentrated on particular bodies of material but with broader implications. It is valuable to people engaged in any regions or periods to be made aware of the archival materials which were assembled in those other than their own, and of the problems and opportunities to which they give rise. This book is to be welcomed.