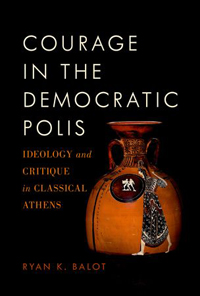 In this book Balot explores the notion that the Athenians had a democratic understanding of courage, attainable not only by heroes but by all citizens, based on free debate and seeking an appropriately democratic kind of eudaimonia. The Athenians did not manage to free themselves from the kind of aggressive courage which sought rule over others (Balot wears his heart on his sleeve), but the ideal, he claims, is still attractive.

After an Introduction to the theme and to Balot's treatment of it, the book is divided into three Parts. Part I studies the "Periclean model". In Thucydides' version of Pericles' funeral oration the Athenians' daring is based on rational discussion. Athens' eudaimonia (which includes its imperial power) is worth daring for: daring is elicited by a sense of shame, but for the Athenians that is reasoned while for the Spartans it is mechanical.

Democratic free speech produced a greater cognitive understanding of courage, and the possibility of hearing dissenting views led to better judgments. The orators displayed "civic courage" in confronting the risks attached to free speech, and democratic debate mitigated the risks. Already in the Persian Wars Aeschylus showed the Persians as lacking free speech and rational courage, and for Herodotus the Athenians' reasoned commitment to freedom was better than the Spartans' fear-driven courage.

Yet the Athenians' daring and innovativeness led to pleonexia and rule over others. Even Pericles in his first speech was "rigid and extreme", and he could not control chance or his successors. In Plato's Laches neither Nicias nor Laches can combine logos and ergon, while Socrates can, though he claims not to know what courage is. Isocrates tried to contrast the virtuous hegemony of earlier Athens with the vicious imperialism which followed.

Part II is devoted to Equality, Emotion and Civic Education. Athens democratised the heroic virtues, but it is often remarked that its ideal warrior remained the hoplite. Balot shows that the achievements of sailors were celebrated also, and that there was not hostility but cooperation between soldiers and sailors. Traditionally Greeks were incited to courage by love of honour and fear of dishonour. The Persians were effeminate slaves of the Great King; Philip of Macedon and his army could not be dismissed similarly, but Demosthenes claimed that Athens' democratic courage was better, and was defeated only by bad luck.

For democratic courage to work, reason and emotion had to be harnessed together. Shame and fear of punishment are sometimes found in Athens, as in Lysias' client Mantitheus; but when Cleon tried to arouse anger in the debate on Mytilene the Athenians were able to restrain their anger and choose the better policy. Lycurgus in prosecuting Leocrates argued that the citizens were educated and their emotional responses were suitably trained by the punishment of the wicked and the honouring of the good. The Athenians were not totally successful, but they did try to free themselves from the more traditional norms.

Through oratory and also through drama they were led to reflect on suitable role models. In Lysistrata the women try to bring the men to a more mature and socially useful kind of masculinity. Tragedy shows non-democratic manliness to be corrupt, in such instances as Menelaus' attempt to recover Helen in Euripides' Andromache and Agamemnon's sacrificing Iphigenia. The Athenians were thus prompted not, Balot argues, to question their values (as some claim) but to understand them better - yet their understanding also emboldened them "to pursue their warfare with abandon".

That paradox brings us to Part III, on Athens' Ideology of Eudaimonism. Athens had "a contentious array of self-images", which needs to be understood through a conception of eudaimonism, a view of what counted as a good life, which tried to do justice to the claims both of the community and of its individual members. Traditional Greek thinking tended to over-value the community, while much modern thinking tends to over-value the individual. Athenian funeral orations, such as that by Lysias, praised courage which was exercised for just ends, after careful deliberation, as a result of appropriate civic education. If the Athenians sacrificed themselves for their city, it was in order to preserve the kind of life that was worth living.

Democratic participation was essential for this kind of eudaimonia, and true virtue was dependent on understanding. Courage in this setting was both an instrumental good, good for the community, and an intrinsic good, good for the courageous individual, even though it might lead him to his own death. As Herodotus' Solon explained to Croesus in the story of Tellus, if one does not face risks for one's community one's life does not make sense; it is better to die well than to live badly.

Balot ends his book with three challenges. First, the Athenians' view that their courage was better than the Spartans' courage because it was based on understanding is to be accepted. Secondly, Plato at the end of the Statesman stresses the need to weave together courage and restraint (sophrosyne), and elsewhere he depicts Socrates as calmly "standing fast" for appropriate ends (though in acting thus he avoided harm rather than achieved good). Demosthenes in his quarrel with Midias reacted not physically but by recourse to law, and this trusting of the outcome to the demos and its deliberation was not cowardice but an appropriate form of courage.

Finally, Athenian courage recommended a less destructive form of manliness, yet that actually supported the militarism which built up the empire. De Tocqueville in studying the early U.S.A. saw a levelling-down among the citizens and a national pursuit of bourgeois objectives; but Balot argues that it should be possible for a democracy to develop a kind of courage which is given military expression when truly needed but is otherwise expressed in other ways.

Balot has teased out an important theme, and has given us a thorough and stimulating exploration of it. In contrasting Athens and Sparta he is of course contrasting extremes, and I suspect that if we had more information on the many less-attested cities we should find a spectrum rather than a sharp division between the heroic and unthinking and the reasoned and democratic. And I would add one other qualification. I suspect that, having established the importance of his problem, Balot is perhaps too ready to suggest that the writers whom he studies saw and discussed the problem in his terms.