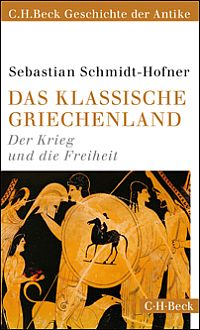 This volume, one of six in Beck's Geschichte der Antike, covers Greece from the Persian Wars at the beginning of the fifth century B.C. to the death of Alexander the Great.

In his Introduction Schmidt-Hofner uses Lysias' Epitaphios of the 390's to point to the omnipresence in classical Greece of warfare and of the motif of freedom.

In outlining and analysing the story of classical Greece he engages, sometimes critically, with the evidence and imparts his own slant to the narrative. The Persian Wars were fundamental, not in fact for Greek civilisation or democracy, or as a source of freedom for all the Greeks, but for the Greeks' perception of themselves and their history, as the occasion when they fought heroically and successfully for freedom against oriental despotism. Those who could adopt elements of oriental luxury did, but this was the origin of an enduring contrast between Europe and Asia; and a clash between Greeks and Carthaginians in Sicily in 480 was assimilated to it.

After the Persian Wars Athens took over the lead from Sparta (allowing that was Sparta's greatest mistake), and turned its 'Delian League' into an empire in which it impinged to an unprecedented extent on the economic and political life of the member states. Athens' democracy was one instance of a widespread development across the Greek world (this is true, though Schmidt-Hofner sees as democratic some features which are better seen as belonging to constitutional government more generally). Developments from Cleisthenes to Ephialtes and after established the demos as the ruling body, though they originated in feuding within the aristocracy. Political equality was limited to adult male citizens, and even for them it was not accompanied by social and economic equality. Political leaders could emerge, but they had to retain the confidence of the demos. Legends about the past were fashioned to suit the Athenians' image of themselves; dramatic performances were political occasions, and the dramas prompted the audience to reflect on political issues.

But not all Greek states became democratic, and Athens' fifth-century rival Sparta, with political equality within a small citizen body ruling over large numbers of subordinate perioikoi and enslaved helots, had come to cultivate an austere and military lifestyle and a conservative ethos. It was confirmed in this by the serious earthquake of c. 464 and the helot uprising which followed that.

The helot uprising also marked the beginning of the divison between Athens and Sparta which drew in much of the Greek world. They might have coexisted peaceably after the Thirty Years' Peace of 446, but Corinth put pressure on Sparta, and Athens' pride would not allow it to give way when challenged (but I should put more emphasis on Athens' undiminished ambition after 446). So began in 431 the Peloponnesian War, to free the Greeks now from subjection to Athens; but at first neither Sparta's land power nor Athens' sea power could defeat the other. In the mid 420s Athens became more aggressive and successful, notably at Pylos (though Schmidt-Hofner is sceptical of a defensive Pericles and of new policies introduced by new politicians), but success was followed by failure against the Boeotians and in the north-east, and in the Peace of Nicias in 421 the two sides tried to restore their pre-war equilibrium. War brought violence and a collapse of standards; and the collapse was encouraged by the relativism taught by the Sophists, while anxiety led Athens to a greater need for the gods.

The dissatisfaction of Sparta's allies with the Peace led to a period of instability in the Peloponnese, until Sparta reasserted itself with a victory at Mantinea. Then Athens' attempt to support allies and conquer Syracuse in Sicily ended in disaster. Athens fought on; but a Spartan garrison at Decelea confined the citizens within the walls, Delian League members and Persia enabled Sparta to take the war into the Aegean, and growing opposition to the democracy by the élite culminated in the oligarchy of the Four Hundred. The oligarchy fell, but the Athenians remained divided. Athens had some successes, but Persian subsidies enabled Sparta to outlast Athens, and after defeat at Aegospotami in 405 the Athenians could not continue. It did not suit Sparta to destroy Athens, but Athens lost its empire and its navy, was made subordinate to Sparta and was subjected to the oligarchy of the Thirty.

Sparta took over Athens' empire, and started fighting to defend the freedom of the states against Persia, while in mainland Greece former allies of Sparta joined a reviving Athens in fighting with Persian backing against Sparta. In 386 Sparta and Persia imposed the King's Peace on the Greeks, returning the cities of Asia Minor to Persia and giving the others "autonomy" to be interpreted by Sparta. Sparta's interpretation of autonomy prompted the foundation of Athens' Second League, to defend the autonomy of the Greeks against Sparta. Sparta was beset by internal problems, and was decisively defeated not by Athens but on land, at Leuctra, by Thebes, whose Boeotian koinon was one of several regional combinations. And this was a period which saw growing numbers of tyrants and mercenary armies. In particular, in the west Dionysius subjected other cities to Syracuse while fighting for their freedom from Carthage.

Sparta lost its territory of Messenia, and its ability to control a stable Peloponnese. Thebes next tried to challenge Athens and itself to become the leading power on the mainland. Athens had ambitions but lacked the resources to achieve them, and in the Social War lost leading members of a League which had lost its purpose. The result was, in spite of pleas for Greek unity and discussions of good leadership and governance, a "contest with no way out".

Philip of Macedon succeeded to his throne in fragile circumstances but bound the aristocrats to himself and through success in war made Macedon a major power in the Greek world. In Athens Demosthenes and his supporters championed the "freedom" of Greece, but after his victory at Chaeronea Philip united the Greeks in a league to fight for "freedom" against Persia. For Schmidt-Hofner this ended the poleis' role as major actors; yet Athens celebrated its past glories, and retained its democracy while allowing increased scope to benefactors. Different states at different times fought unsuccessfully for "freedom", finally Athens and others after the death of Alexander. In Sicily at the same time Timoleon enabled the cities to assert their freedom against tyrants and the Carthaginians.

The "classical" period, of the fifth century or the fifth and the fourth, was not wholly or uniquely admirable, but it offers much to engage our interest today.

There is only one footnote, but there are eleven pages of bibliography, organised by chapters and topics, and including items in a range of languages. There are maps and (rather grey) illustrations, but there is no list of their subjects and of where they are placed; and there is a chronological table.

The book is well written, and it provides a good and a stimulating introduction to this central period of Greek history.