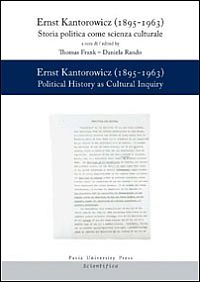 The year 2013 marked the 50th anniversary of the death of one of the most influential - and discussed - historians of the last century: Ernest Kantorowicz. Born in Poznań 1895 into a Prussian family with Jewish ancestry, Kantorowicz went on to study philosophy and history in prestigious German universities. Following the publication of his controversial biography of emperor Frederick II, he secured a professorial chair in Frankfurt, before being forced to emigrate by the anti-Semitic measures of the late 1930s. He spent the rest of his career at the University of California, Berkeley, and then at Princeton, where he published his classic study on The King's Two Bodies (1957).

Kantorowicz's life and works have been the subject of articles, conferences and extensive biographies - notably by Alain Boureau and more recently by one of his students, Robert E. Lerner. Over the years, much has been said, written and debated about Kantorowicz's early involvement in nationalist circles, his belated opposition to the Nazi regime, and his later defiance of McCarthy's anti-communist inquisition. Less attention, however, has been placed on Kantorowicz's method as professional historian, or on its potential for use in current historical and interdisciplinary research. On the occasion of the 2013 anniversary, a workshop in Pavia offered European scholars an opportunity to reflect on this topic. The present volume, published by Pavia University Press, presents seven of the ten papers given on that occasion.

As Thomas Frank - co-editor with Daniela Rando - explains in his introduction, reflecting on Kantorowicz's method is essentially a study of his innovative approach to political history. Kantorowicz's innovation, he writes, can be best appreciated by reconsidering his study of the medieval political theology behind The King's Two Bodies, that is the notion of the monarch as both human person (the body natural) and embodiment of the community of the realm (the body politic). Indeed, Frank's starting point is fascinating: Kantorowicz's extensive analysis of literary metaphors, liturgical texts and legal maxims to explore how contemporaries understood the person as well as the office of the king could be framed as a "linguistic turn avant la lettre" (5). However, rather than relating this early use of political languages to what is now the history of political cultures, Frank makes a case for employing Kantorowicz's method of "cultural inquiry", as the title of this volume goes, in modern interdisciplinary studies.

This proposal is possibly best taken up by Giuseppe Polimeni, who draws together historical as well as literary approaches to explore the place of Dante in Kantorowicz's study of Frederick II. In this (in)famous biography, the historian proposed that the foundation of the Sicilian School of poetry provided a cultural framework in which the concept, myth and language of imperial sovereignty could be reinforced. Polimeni suggests that Kantorowicz saw in Dante not just another advocate of imperial notions of power and justice but the true continuator of Frederick's linguistic and cultural project (137).

Another paper that explores the intersection of literary and historical scholarship in view of Kantorowicz's method is offered by Raeleen Chai-Elsholz. The author draws on literary theory and uses both documentary and narrative sources to trace the "metaphor of slavery" (71) contained in the papal title servus servorum Dei in the political and cultural context of the late ninth century. At the same time, in locating the formula in different types of text - "from the Bible to canonical collections, from saint's lives to chancery handbooks" (73) - Chai-Elsholz makes a case for the use of digital resources in intertextual analysis.

The combination of new tools and Kantorowicz's old suggestions is also apparent in Francesco Terlizzi's essay based on an edition of the so-called Norman Anonymous which is more recent and complete than that employed by Kantorowicz himself. Terlizzi presents a different reading of these treaties shedding light on alternative political theologies which presented an alternative - and sometimes even an opposite position - to the Gregorian reform. Besides, in discussing the theory of the pope's three bodies (officer, individual and sinner) alongside that of the king's two bodies, Terlizzi brings the focus of the volume back to Kantorowicz's key work.

The 1957 book is also the starting point of two other papers, both focusing on the notion of corpus mysticum. The first, by Roberto Lambertini, highlights Kantorowicz's debt to the work of the 20th-century theologian Henri de Lubac. Lambertini notes how Lubac's explanation of the medieval distinction between Christ's corpus verum (his actual body, the Eucharist) and corpus mysticum (his historical body, the Church) was employed by Kantorowicz to show how, during the medieval period, strictly religious ideas developed into equally sacred, secular notions. In the second paper exploring the corpus mysticum, Joseph Canning moves the focus from the history of political thought and languages to legal history. Canning points out that the jurist Baldus de Ubaldis is one of the most cited authors in The King's Two Bodies - second only to Dante - and that Kantorowicz thus contributed to making Baldus' corporation theory accessible to a much wider audience.

Two other contributions - more historiographical in purpose - round off the volume. In a lengthy essay, Robert Pawlik sets out to place Ernst Kantorowicz in the context of 20th-century historiography, particularly comparing his politische Theologie to that of Carl Schmitt and Erik Peterson. Francesco Torchiani, on the other hand, uncovers the unpublished history lectures given by Kantorowicz to American soldiers bound for Europe in 1944. Torchiani shows that, faced with the challenge of teaching modern Italian history, Kantorowicz turned to works published by other exile academics, such as Gaetano Salvemini.

On the whole, despite a programmatic introduction, the essays collected in this volume follow various approaches to Kantorowicz's method and its potential for current (interdisciplinary) research. Ultimately, even though the editors' proposal to make Kantorowicz a beacon for cultural studies is little echoed in its papers, the volume remains a welcome addition to a now even richer series of studies on the life, works and method of one of the major intellectuals of the 20th century.