Louay Fatoohi : Abrogation in the Qur'an and Islamic Law 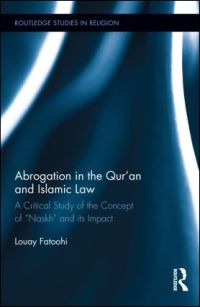 Nowadays, it is as if the Western world is obsessed with virtually everything even remotely Islamic. Every single day one can literally loose oneself in all the media-output on the afore mentioned topic if one chooses to do so. Roughly, participants in this vast (public) debate can be divided into three groups: anti-Islam (Islamophobes et al.), pro-Islam (apologists et al.) and the large grey majority which is stuck in the middle of this epic polemic. To win over hearts and minds, both pro's and anti's make use of Islam's primary sources - Qur'an and Sunna - to substantiate their respective main position "Islam is war!" or "Islam is peace!".

In order to formulate one's own opinion on these complex issues it simply will not do just 'to pick up a Qur'an and start reading'. A sound knowledge of Qur'anic exegesis and the Sunna is required, preferably in conjunction with some basic knowledge of earlier versions of the so-called Abrahamic faith - Judaism and Christianity. But there is more. One also needs to take into account the concept of "Naskh" - abrogation in Arabic. Basically, this is the mechanism with which apparent conflicts and contradictions between Qur'anic revelations are dealt with - by the nullification of a certain commandment by another one, usually one which was sent down by God via the archangel Gabriel to the Prophet Muhammed at a later date. Abrogation is an important concept in the epistemological tradition of Islam, henceforth it justifies scholarly attention in its own right. Further importance of Naskh is derived from the fact that the concept is used both by Muslims - to protect their religion against claims of inconsistencies - and by critics of Islam - to bolster their arguments. The raison d'être of this book is self-evident since it is the only recent specific study on abrogation in the English-speaking world. [1]

In the introduction of his book, Louay Fatoohi - PhD in Astronomy with an interest in politics and Islam - starts with discussing the role of the concept of abrogation in Islamic sciences, especially in Islamic Law from both Muslim and non-Muslim perspective. Proceeding with the history of the term "Naskh" and its developmental process, Fatoohi identifies three distinct modes of abrogation and their differences - legal abrogation: "the abrogation of the ruling of a verse but not its wording"(25), legal-textual abrogation: "the abrogation of both the ruling and wording of a verse"(25) and textual abrogation: "the abrogation of the wording of a verse but not its ruling"(25). The second chapter deals with the question whether abrogation is unique to Islam or already existed in revelations of earlier Abrahamic prophets. The question whether abrogation has any Qur'anic validity is central in the next chapter of the book since Naskh is explicitly mentioned only four times in the Qur'an. Furthermore, a separate chapter has been added that deals with what are believed to be two indirect references to Naskh in the Qur'an. Early and classical Islamic scholars, engaged in methodical debates and differing about recognition of all three earlier mentioned modes of abrogation, are discussed next. In the sixth chapter the first mode of abrogation - Legal abrogation - is discussed. In the following chapter a case-study for this mode is added where the controversial "verse of the sword" is used to elucidate it. Questions relating to whether the Qur'an corresponds with the muṣḥaf are dealt with in the book's next two chapters.

The split between the chapters is made on the ground of reasons behind this lack of correspondence between Qur'an and muṣḥaf: divine will or human error. Chapter ten handles legal-textual abrogation and the third and final mode of abrogation - textual abrogation - is discussed in chapters eleven and twelve: the most prominent example of this mode is the problemacy around the so-called "stoning verse" and therefore gets its own chapter, the rest to follow. Up next is abrogation in the Sunna. The author introduces his own views on Islamic Law and abrogation in the penultimate chapter of the book - Fatoohi argues that traditional views on Islamic Law are rigid and static, and in the long run, this will lead to doubts about the universality of the Qur'an. Lastly, the final chapter covers the authors conclusions which are: abrogation in the Qur'an does not have a Qur'anic basis and the problems it causes, in the end, question Qur'anic principles - the concept was introduced in Islam to make sense of conceived cases of conflict and not found to be mentioned anywhere in the Qur'an. Early Islamic scholars developed the concept of abrogation themselves and used it inconsistently, thus adding to the problemacy around it and eventually leading to the three distinct forms of abrogation - legal, legal-textual and textual abrogation.

Time to address the book's strengths and weaknesses. Western Islamicists have virtually ignored the concept of abrogation in Islam, since this is one of the few recent specific studies on the subject. Furthermore, Fatoohi's bibliography clearly shows he must have a sound knowledge of the Arab language - which most Western Islamicists lack in good proficiency. The book contains a decent explanatory glossary for the most frequently used terminology. In addition to the glossary, the author has included a handy appendix on the subject of "Ḥadīth" and "Sunna" which gives a concise but acceptable historical and practical description of both terms. The author has opted for endnotes which guarantee a better overall reading experience. For a more pleasant overall reading experience it would have been better if the author had moved his treatise on the historical background of the concept of abrogation to the introduction of the book, hence to ensure his readers are instantly plunged into the subject. Also, when dealing with the subject of abrogation in Islam it is insufficient to only talk about it in relation to the Qur'an as Fatoohi himself admits. For the bigger, and more accurate, picture the entire scope of the Sunna of the Prophet could be incorporated in the study of abrogation in Islam - perhaps this can be remedied in future versions of the book. Lastly, without referring to the author's intellect or doubting the quality of this study and its conclusions, I have to criticize Fatoohi's apparent lack of official competence dealing with this subject since he, as far as is ascertainable, did not study Islamic sciences in the Islamic or Western world - nor has he held any academic position, relevant or not, since doing his PhD in astronomy. This does not per se imply that the author is unqualified to write about this subject but I think (academic) readers would like to know how the author obtained his knowledge - perhaps this too could be included in future editions. Notwithstanding, in my humble opinion Fatoohi succeeded to further our knowledge on abrogation in Islam with a fresh new perspective on the matter - especially by convincingly showing his readers that there is a wide variety of opinions on the subject, both amongst Muslims and non-Muslims.

All in all, this book provides its readers with a detailed, though insurmountably technical, study of Qur'anic abrogation. Hence it deserves a place on every Islamicists bookshelf - especially those dealing with Islamic Law. Other readers beware: you will need a sound knowledgebase of (early) Islamic history to properly digest this book!

[1] John Burton was, to my knowledge, the first scholar to publish a specific study on the subject of abrogation in English - The Sources of Islamic Law: Islamic Theories of Abrogation (Edinburgh, 1990). More recently this was followed by a study by Israr Ahmad Khan: The Theory of Abrogation. A Critical Evaluation (Kuala Lumpur, 2006). As far as I know, these two works, together with the above discussed book by Louay Fatoohi, constitute the only major specific studies on the subject of abrogation in the English language.