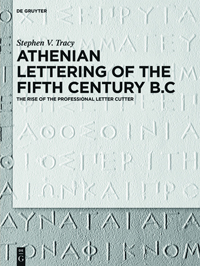 The large number of public inscriptions surviving from Athens makes it possible to identify the idiosyncrasies of particular letter-cutters and to assign groups of inscriptions to the same cutter. A number of scholars had suggested some identifications earlier in the twentieth century, but Tracy was encouraged by S. Dow to devote his Harvard Ph.D. thesis (1968) to this study, and he has brought more thoroughness and precision to it than anybody else. His first article in this field was published in 1967, and was followed by a more general manifesto in 1970. This work is not simply of antiquarian interest: identification of a cutter can support or refute suggestions that separate fragments are from the same stone, and can set limits to the period within which an otherwise undatable inscription should be placed.

Most of Tracy's previous work has been on later inscriptions, but he has turned to the fifth century occasionally, and now he gives us a substantial book on the fifth century (with three previous studies reprinted as appendixes). His opening section, "Introduction and Methodology", insists that identifying a cutter's hand is like identifying a person's handwriting: careful study shows that each cutter had his own distinctive way of forming particular letters, to which he adhered during what was sometimes a fairly long career (though Tracy finds more variation within the work of some fifth-century cutters than of later cutters).

A list of "Inscriptions Discussed and / or Assigned" is followed first by Part I, "General Studies of the Writing of the Fifth Century B.C." Each of the few surviving laws and decrees of before c. 450 seems to have been the work of a different cutter, and several of c. 450-400 are unique, with lettering found only in the one text and not matched by any other. The two large stelai which contained the first twenty-two tribute quota lists of the Delian League provided work for cutters on a scale which had not existed before: they are the work of just six men, and with two short exceptions each year's list was cut by one man; indeed a single man was responsible for the whole of the second stele. The missing list of 449/8 Tracy connects with the occasion when the hellenotamiai were wrongly convicted and executed, and he explores what was done in the following years to bring the funds and the records back into order. On the "Attic Stelai" recording the sales of the property of the men convicted in connection with the religious scandals of 415, in a chapter revised from a 2014 article Tracy identifies eleven cutters, sometimes more than one for a single stele; he suggests that there may have been fewer than the ten stelai assumed and that editors may have misplaced some fragments.

In Part II Tracy proceeds to study twelve cutters active between c. 450 and c. 390, and finds about 186 inscriptions ("about" because it is not always certain what should be counted as a separate inscription) which can be assigned to one of these. Two of his cutters were exceptionally prolific: The "cutter of IG ii2 1386" was responsible for about 47, between 423/2 and 394/3, and the "cutter of IG ii2 17" for about 73 (including three private gravestones) between 414/3 and 386/5, which makes him the second most prolific cutter of all periods of those whom Tracy has identified.

This part of his study leads Tracy to correct some readings and to suggest some revised dates. One more general point emerges too. The doctrine that older forms of some letters, in particular sigma (originally a letter formed of three strokes, but later one formed of four), gave way to newer forms after c. 446 has now by general consent been abandoned. It was defended particularly staunchly by B. D. Meritt and those associated with him (1-2), but as Tracy correctly notes it was first propounded by A. R. Rangabé in 1842 (87). Tracy shows that what gave rise to the doctrine was in fact the preference of one particular cutter, the "cutter of IG i3 270", who used the newer form of sigma in all the tribute quota lists which he inscribed, those of 448/7 and 446/5-441/0, and in the other two inscriptions which Tracy attributes to him, whereas the cutters of the other early lists had used the older form (86-7). The lists of 440/39-432/1 were carved by the "cutter of IG i3 35", and he followed his predecessor and used the newer form of sigma for all of them; but he used the older form for the other two texts which Tracy attributes to him (95-6). This is the only cutter of whom it is certainly true that he used both forms of sigma, whereas several cutters wavered with no clear pattern between rho with a tail, R, and rho without a tail, P (197). However, there are early forms of some other letters which Tracy still accepts as pointers to a date before c. 450 (217).

In a final "Summation" Tracy stresses the different styles of different cutters, and suggests that, although from the beginning they were "more than competent", until c. 435 there was not enough work for them to be occupied full-time as cutters of inscriptions. During the second half of the fifth century more public texts came to be inscribed, and more men were employed in inscribing them. Tracy argues that they did not carefully lay out their text before carving it but began with horizontal lines or a grid and then worked freehand; and he stresses that with the abandonment of the old doctrine about changes in letter forms there is a general need to reconsider the dates of fifth-century inscriptions which do not contain material guaranteeing their date.

As appendixes Tracy reprints three of his earlier articles on the fifth century: one from 1984, which was his first venture into the fifth century; and two from 2014, linking the absence of a tribute quota list for 449/8 with the occasion when the hellenotamiai were executed, and identifying a "fine plain style" in a number of inscriptions with the older form of sigma (none of them by cutters identified in this book) which he thinks should be dated late rather than early.

Inevitably there is still an element of personal judgment in these investigations; but Tracy has worked thoroughly on Athenian inscriptions over many years, has formulated his criteria for identifying a hand systematically and explicitly, and is cautious rather than bold in making his attributions. It may be that a few of his decisions could be challenged, but overall it is hard to imagine that anybody will be able to improve on what he has done. We must be grateful for all the painstaking work that he has done, and for the fruits of his fifth-century work presented in this book.