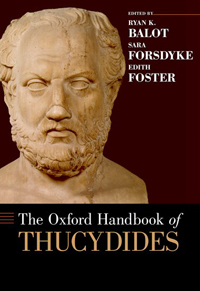 In this wide-ranging new survey of the Greek historian Thucydides, Ryan Balot, Sara Forsdyke and Edith Foster have assembled a varied and impressive collection of voices that seek to appreciate Thucydides not only as an historian, but also as a literary artist, philosopher and thinker who has exercised a profound influence on a range of other ancient authors, including later historians such as Tacitus and Procopius. The book is divided into four main sections, totalling some forty chapters. As such, it is clearly beyond the scope of a review such as this one to detail comprehensively each of the contributions on offer. Nevertheless, I will use this opportunity to traverse my way through each of the key sections, focusing on a relative sample of contributions in a book that will no doubt serve as a vital Thucydidean resource for scholars and students alike.

The book begins with an introduction in which the editors cogently set out the themes and content of each of the volume's main sections. Section 1 centres on Thucydides' historical methodology and his value as an historian of the fifth-century Greek world and beyond. In 'Thucydides on early Greek History', Hans van Wees offers a fresh assessment of the so-called Arachnology (1.1-23), examining Thucydides' authorial outlook in this introductory part of his work, not least the special emphasis on the unsurpassed greatness of Athens' naval empire. However, van Wees also flags up the many inconcinnities between Thucydides' account of early Greek history (e.g. his knowledge of warfare in the archaic period) with that of other sources. He thus concludes somewhat pessimistically that 'However impressive as an intellectual feat ... the Archaeology is highly selective and often misleading' (60).

In 'Thucydides on the Sicilian Expedition', Emily Greenwood expands on important aspects of Thucydides' approach as an historian through an instructive reading of Books Six and Seven, the so-called 'Sicilian Expedition' (a scholarly shorthand which, for this reader at least, Greenwood's characteristically thoughtful discussion demonstrates effectively is rather problematic, 162-3). Greenwood's analysis displays clear sensitivity to the Athenocentrism of this part of Thucydides' work, which of course concerns a discrete war within a larger, on-going war (i.e. the Atheno-Peloponnesian War). This chapter is also a salutary reminder of the partial, however (pre-)dominant, nature of Thucydides' textualised account of 431-404 BCE, a period of history that is captured differently in a suite of other texts (Old Comedy, Xenophon's Hellenica, Plutarch's Life of Nicias, inter alia).

In Section 2, 'Thucydidean Historiography', the volume explores various literary and rhetorical aspects of Thucydides' work. In his chapter entitled 'Authorial Comments in Thucydides', Mathieu de Bakker explores the functions of authorial statements in the History, which serve to open and close individual logoi, as well as introduce material of a mythological or ethnological nature. Here, de Bakker shows how Thucydides' authorial voice is notably prominent in Book Eight of the History, arguing that the increasing divisions within the Greek world required a stronger authorial presence on Thucydides' part. Rosario Munson meanwhile illustrates in 'Thucydides and Myth' how mythic stories are subjected to tight authorial control in the History. Unlike, for example, Herodotus' Histories, in which myths form part of the fabric of numerous logoi, Munson shows that Thucydides denies the use of myth in his speeches, instead deploying mythic material as part of argumentative excurses, not least in the opening section of his work.

The third section of the book moves on to exploring multiple aspects of Thucydides' relationship with political theory. The section is headed by Ryan Balot's chapter 'Was Thucydides a Political Philosopher?', an engaging contribution that argues convincingly demonstrates how Thucydides presented critical accounts of Athens and Sparta, two poleis that proved equally flawed insomuch that their political leaders' self-aggrandising inhibited ordinary citizens' pursuit of the good life. Elsewhere, in 'Religion, Politics, and Piety', Paul Rahe treads a careful line in regards to Thucydides' approach towards religious phenomena, accepting a clear distinction in narrative presentation with that of Homer and Herodotus (according to Rahe, as indeed many other contributors, Herodotus serves unambiguously as one of Thucydides' predecessors), but still suggesting that Thucydides was attuned to the role of traditional piety in the ancient city. Rahe shows well that while Spartan individuals such as Sthenelaïdas and Brasidas appeal to the gods, a whole suite of Athenian individuals (aside from the general Nicias) pay no such obeisance to the divine in Thucydides' narrative. For Rahe, then, Thucydides' narrative suggests that it was the Athenians' move away from ancestral religion, as championed by Pericles, which eventually caused Athens' ruination.

In the final section, 'Contexts and Ancient Reception of Thucydidean Historiography', the book examines further Thucydides' intellectual milieu and literary connections, discerning overlaps with comedy, tragedy and, in the case of Rosalind Thomas' chapter ('Thucydides and his Intellectual Milieu'), the so-called sophists of the later fifth century BCE. This section also explores Thucydides' reception in the Greco-Roman world, incorporating a discreet number of authors such as Sallust, Tacitus and Dionysius of Halicarnassus. In 'Writing with Posterity in Mind: Thucydides and Tacitus on Secession', for example, Cynthia Damon traces Thucydides' structures of thought in Tacitus' account of the Batavian revolt from Rome in the Histories. Although Thucydidean structures and patterns of thought can be discerned here, Damon nonetheless emphasises the distinctiveness of Tacitus' own historiographical programme, which is by no means derivative of Thucydides.

I hope to have given some indication of the scale and the range of contributions in this invigorating work. As I have signalled in my analysis of Rahe's chapter, it would have been helpful to see further analysis of the dynamic relationship between Herodotus and Thucydides (an expanding area of focus in recent scholarship; see, e.g., E. Foster and D. Lateiner [2012], Thucydides and Herodotus, Oxford: OUP), two historians whose accounts were both articulated in light of, and disseminated during, a period of internecine strife in the Greek world. The surety with which many contributors assume a clear sequentiality between these two writers (i.e. Herodotus - Thucydides) has rightly weakened in recent years, particularly as a result of scholars' greater attentiveness to the fluid space in which different kinds of literary works were composed and published throughout the fifth century BCE.

While the volume totals nearly some 800 pages, it is a real pity to see no treatment of Thucydides' reception outside of Greek and Latin texts in antiquity. To be sure, it is true that in recent years readers have been privy to a number of excellent studies dedicated to the reception of Thucydides in antiquity and beyond (many of which are helpfully enumerated by the editors on p. 16). Nonetheless, it seems rather curious for a book in a series such as this, which, according to the publisher's website, offers 'authoritative and up-to-date surveys ... critical examinations of the progress and direction of debates, as well as a foundation for future research', to have neglected what is patently an important area of investigation in twenty-first century Thucydidean studies (or, for that matter, almost any area of current research in classical studies). Indeed, the fleeting references made to the impact of Rankean historiography on Thucydides' reputation since the nineteenth century (2, 4-5, 19, cf. 605) is just one such post-antique reception context that might have figured productively in this study.

This is nevertheless an invaluable resource that is sure to be a cornerstone of many academic treatments concerning Thucydides' historical, philosophical, political and literary contexts in the decades to come.