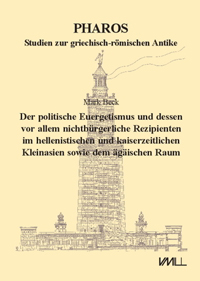 Since the appearance of Paul Veyne's Le pain et le cirque in 1976 elite public giving, or euergetism, has been considered a defining feature of Hellenistic and Roman civic culture. For Veyne and other scholars, euergetism is 'civic' in two senses: first, as mostly an urban phenomenon, and second, as chiefly aimed at the benefactor's fellow-citizens. Mark Beck does not deny that citizens constituted by far the most frequently attested recipients of elite generosity, but rightly points to the fact that in a significant minority of inscriptions, ranging in date from the early Hellenistic period to the early third century CE, various non-citizen groups are also mentioned as recipients of distributions or participants in festivals or public banquets paid for by elite benefactors (he tabulates the attestations at the back of the volume).

This is the first book-length treatment of this important sub-category of euergetic gifts, and as such it is very welcome. The book betrays its origins as a typical German dissertation in that it contains extensive sections discussing the existing scholarly literature, in this case on euergetism and gift-giving, including a detailed consideration of anthropological scholarship on the gift and reciprocity, allowing Beck to stress the reciprocal nature of euergetism (gifts in exchange for honours) as well as its pre-Hellenistic origins in Archaic and Classical forms of gift exchange, aspects which were played down by earlier authors like Veyne. The first half of the book also contains a longish section on elite benefactors' possible motives, based partly on an analysis of the honorific discourse in the inscriptions (e.g. 'love of honour' [philotimia], patriotism [philopatria]), partly on the wider social and political context (intra-elite competition, public expectations, power legitimation, economic returns ...). Even if the author does not make explicit which motive(s) he considers most important, this section, with its detailed discussion of many different sources, tracing the development of concepts like philotimia and charis through the ages, will surely be useful to researchers.

Beck then focusses on euergetic recipients. He first offers a discussion of citizen-recipients, arguing that, from the mid-Hellenistic period onwards, benefactors increasingly began to single out privileged citizen-subgroups within the poleis, such as the city councilors (bouleutai), the members of the council of elders (gerousia) and other supposedly privileged but less well understood groups such as the ekklesiastai and the sitometroumenoi. Members of such groups received larger handouts, or better-quality food at banquets, than ordinary citizens (politai), a development which reached its apogee, according to Beck, in the poleis of the high Roman empire.

Next he turns to non-citizen recipients, who, when included, often partook in the same euergetic distributions that also involved privileged citizen-subgroups and ordinary citizens. Beck offers detailed, chronologically structured discussions of epigraphic attestations for the inclusion of, respectively, resident Romans, other types of free non-citizen residents such as metoikoi, paroikoi, katoikoi, katoikountes, oikountes, freedmen, slaves and various categories of 'foreigners' (xenoi). He then links back to his earlier discussion of increasing status-based differentiation by benefactors among their citizen-recipients, and offers his main thesis.

Beck connects the inclusion of non-citizen groups in euergetic feasts and distributions from c. the second century BCE onwards to a slow but increasing oligarchisation of Greek civic politics from that period onwards, as exemplified by the growing attention paid by benefactors to privileged groups among the citizenry, primarily the bouleutai and the members of the gerousia, who received larger handouts than ordinary citizens. During the Hellenistic period, Beck argues, inclusion of non-citizen groups such as katoikoi and paroikoi, who in turn received smaller handouts than ordinary citizens (politai), was meant to reassure the latter that, despite the highlighting of privileged citizen-subgroups such as the bouleutai, which reflected the new political realities, the citizen-community as a whole still counted. The dividing line in the polis was still between citizens and non-citizens. This, Beck argues, changed in Roman imperial times, as a logical consequence of the ever-progressing oligarchisation of polis-politics. The dividing line now came to be drawn between the privileged groups among the citizenry and 'the rest', as exemplified by euergetic distributions in which ordinary citizens and non-citizens received the same amounts, and the latter were often lumped together into a single group (e.g. katoikountes).

Beck is to be praised for integrating the evidence for gifts to non-citizens into an inspiring long-term vision of euergetism and the evolution of Greek civic politics. Yet his generalizations are sometimes based on too few texts, particularly in the sections about individual non-citizen groups. There is also a discrepancy in the way he deals with the role of the people (demos). Early on (14) he is critical of those who see the post-Classical polis as fully dominated by elites, and at various points (e.g. 184-190, 397-381) he stresses the role of the popular assembly in constraining the euergetic behaviour of the rich. For the most part, however, he emphasizes how fully oligarchic the poleis had become under the empire, as demonstrated by the lack of differentiation in the treatment of ordinary citizens and non-citizens in euergetic distributions.

This tension is not resolved. Beck seems unable fully to match the messy image of civic politics revealed by the literary sources (Dio, Plutarch, Pliny), in which polis-traditions of citizenship, civic virtue and mass political participation are seen to clash with the role demanded of civic elites by the imperial authorities and by the resulting intra-elite struggles, with the neatly arranged hierarchies displayed in the honorific inscriptions, which the author takes too much at face value. These distributional hierarchies created by benefactors were not straightforward reflections of socio-political reality; rather, they present an image of civic society as elite benefactors thought it should be, an idealized version legitimating the elite's own social position, a version, arguably, which the demos allowed elites to construct in exchange for their gifts. And if ever more gifts helped elites to keep a restive demos under control, thus avoiding conflicts that might draw unwanted royal or imperial attention, would euergetism not have a similar integrative effect on the non-citizen population? Nonetheless Beck has produced an engaging work concerning a hitherto mostly neglected aspect of civic euergetism, which will surely stimulate further debate.