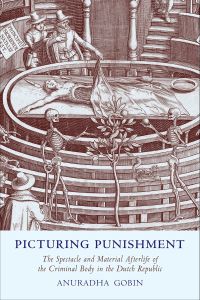 In recent years, a significant body of scholars have focused on how societies have dealt with transgressions of their established norms. The resulting literature has produced stimulating and convincing narratives on how acts of punishment have sought to correct such transgressions and reinforce boundaries of permissible behavior, and how these aims have often fallen short. In her book, Picturing Punishment, Anuradha Gobin adds to these discourses that complicate the idea that punishment practices could produce clear and authoritative boundaries in early modern Europe. By reading the entire apparatus of punishment alongside its deep and overlapping social contexts, she demonstrates that it often articulated far more than authorities intended. Focusing on the seventeenth century Dutch Republic, Gobin shifts attention away from how court proceedings, ritual executions, and anatomical theatres acted upon the criminal body, instead inverting the perspective to examine how those actions and spaces spoke to and acted upon their audiences and society at large.

This book utilizes a wealth of primarily visual source materials to judiciously unpack the spectacles and material afterlives of the criminal body. The chapters guide the reader through the physical sites of seventeenth century punishment, reconstructing not only the rituals of punishment, but the rhetorical underpinnings of these acts and the many ways in which official narratives of justice were subverted along the way. By centering the productive capacity of transgressive bodies and the sites through which they moved, Gobin convincingly situates the criminal body at the heart of crucial contemporaneous developments such as the formation of diverse publics, the production and consumption of early modern media, penal reform, and the visualization of medical sciences.

The book is structured quite effectively according to the movement of a criminal corpse through numerous publicly accessible sites involved with the penal proceedings of the seventeenth century Dutch Republic. Chapter 1 focuses on the construction of Amsterdam's New Town Hall to demonstrate how buildings themselves articulated narratives of justice and civic values. Chapter 2 moves inside that building to provide a detailed account of the spaces and rituals of execution. Here, Gobin deftly blends detailed art-historical analysis of murals, furnishings, and sightlines with primary source accounts of rituals of justice, painting a persuasive portrait of not only the intentions behind these proceedings, but also how participants would have interpreted them from diverse perspectives. Chapters 3 and 4 move beyond the city boundaries to examine the roles physical sites of execution played in and beyond the ritual act itself. Beyond simply manifesting the expulsion of transgressive bodies from the body politic, the removal of criminal bodies from the cities to the gallows gave rise to myriad rituals and associations that produced opportunities for both social coalescence and narrative subversion. Gobin explores the influence of the gallows primarily through their persistent representation in contemporary visual media, pulling from these media an extraordinary litany of connotations that highlight the importance of these sites as well as the authorities' inability to restrict interpretations of officially sanctioned messages.

Beginning with chapter 5, Gobin explores the productive capacity of the criminal body in relation to shifting perceptions on criminal reform and medical knowledge. This chapter starts with a brief demonstration of how the Dutch development of correction houses and their emphasis on the criminal's service for the public good served to enhance the authority of the state and aggrandize the status of certain high-ranking benefactors, before moving on to the well-trod, though no less relevant, narrative of how anatomists in the sixteenth century leveraged their authority to situate the production of knowledge in tactile experience and dissection. Gobin's contribution to this narrative is in connecting the medical revolution of Vesalius and his Fabrica of 1453 directly to practitioners in the Dutch Republic and in emphasizing the role of moral ideology in underpinning this transformation. Chapter 6 dissects the immense rhetorical symbolism of Leiden's anatomical theatre and how touch and sight interacted in this environment to produce moral and medical knowledge for its public audiences. This ability of the criminal body to convey information is expanded on in the book's final chapter, where Gobin highlights how flayed human skins were utilized by printmakers as persistent visual devices. The representation and use of human skin in early modern print products represents the perfect encapsulation of Gobin's project - through these products, the edificatory properties of the criminal body are made explicit: the viewer is encouraged to pursue knowledge through tactile engagement, and avenues are opened for the abrogation of permissible norms.

This book is a treasure trove of new tidbits and historical connotations as it tends to enlighten the reader by combining often overlooked and seemingly inconsequential phenomena in service of big-picture arguments. For instance, chapter 5 connects sexual connotations related to birds and bird hunting, persistent print depictions of a defecating figure (kakker) by different artists, and popular euphemistic references to Amsterdam's gallows as the source of babies. These seemingly unrelated aspects of seventeenth-century Dutch culture are brought together to evince the gallows' complex contemporaneous associations and underscore the authorities' inability to ascribe a definitive meaning to such a liminal space. Examples like these act as footholds for the reader, punctuating the author's sometimes theoretically dense scaffolding for her argumentation.

In total, Gobin's book represents an important milestone in the continued blurring of the lines between social history and art history. For a work so closely tied to the social importance of executions, this reader was surprised by the lack of references to the Dutch Republic's recent historical context. It is hard to imagine that Dutch readings of juridical death were entirely insulated from the popular memory of Spanish autos-da-fé and the cruelties of Alba that played such a prominent role in Dutch visual culture of the period under examination. Regardless, the detail and scale of what is covered in this book sets it apart as a seminal read for those interested in early modern topics as diverse as print culture, penal reform, knowledge production, and even architectural history.