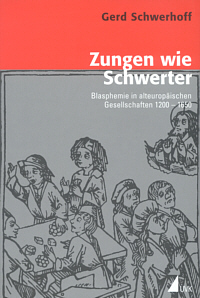 Reading a revised Habilitationsschrift that one can recommend not only to an academic audience but also to an educated general reader is a rare - and pleasant - experience for the reviewer. Gerd Schwerhoff's recent book on the topic of blasphemy in the middle ages and early modernity is just such a work. Scholarly readers will especially admire the deft mastery of a number of different corpora of sources from medieval theological summae to sermons and minutes of court proceedings, from governmental documents to woodcuts and engravings. Non-specialists who happen on the volume will be pleased with Schwerhoff's occasional comparative gestures toward connections with modern charges of blasphemy (especially from the Muslim world) that remind us not only of the relevance of the distant past to the present, but also of the complexity of this relationship.

The book is divided into two general sections: the first is an intellectual, cultural, and legal history of the idea of blasphemy. The goal here is not a microhistorical perspective, as in the recent work of Franziska Loetz [1], but rather a stance rooted in several particular contexts, yet still sufficiently universal in perspective to correct some of the more problematic scholarly surveys of the theme. The narrative begins with the thirteenth century, a point at which the creation of the great theological summae meant that theologians began more actively to systematize their discussions of the term. Though "blasphemy" was a crime that applied first and foremost to Christians as the people most likely to speak badly of God or question God's honor, it was primarily an additional (rather than the main) charge against heretics (since heresy meant speaking falsely about God). Its usages in the middle ages especially are seen most prominently in its applications to Jews. This portion of the first section is one of the highlights of the book in its refocusing of the medieval discourse on the Jews from its typical analysis via the tropes of host desecration and ritual murder to a discussion of their subjection to charges of blasphemy - a tendency that, like many of the phenomena Schwerhoff discusses, stretched over the threshold of the Reformation to continue among both Catholics and Protestants. A number of simultaneous legal and theological developments point to the emergence of a coherent prosecution of the crime in the thirteenth century, and from the very beginning, the crime was handled more actively by secular than ecclesiastical courts, at first by cities and later, during and after the Reformation, by territorial states. Close readings of relevant texts are employed throughout; Schwerhoff never leaves the reader at sea as to the meaning of his evidence, even at the times when he concedes or even emphasizes its ambiguity.

The second section offers a discussion of concrete instances of blasphemy, concentrating on archival records from Basle, Cologne and Nuremberg but including materials from other cities, too, presented under the rubric of a "historical anthropology" of cursing. Schwerhoff's accounts of these incidents are gripping. Although theoretically blasphemy was a capital crime, enforcement and punishment varied drastically in different settings depending not only on the intent of the perpetrator but also on his or her social position, the context of the crime, and the effects of it on bystanders and witnesses. Impressive in this context is Schwerhoff's unwillingness, in contrast to other researchers, simply to accept the discrepancy between norm and praxis: his analysis precisely outlines the gap between ideas about punishing blasphemy and their execution and thus uses the categories of social status and intention, which have to be extrapolated from the sources rather than being found in them explicitly, to point to some of the fissure points of early modern society. From the perspective of the person employing the expressions, for instance, blasphemy was often a way to demonstrate or perform masculinity as well as to signal a particular sort of social status or group membership. In any case, in contrast to claims made by some researchers, blasphemy was hardly an indication of unbelief but rather a way of establishing one's position in a deeply religious society.

Apart from its theoretical contributions, the book is the closest thing to a page-turner our professional reading provides. But the material for thought offered in it is no less fascinating. First, Schwerhoff points out (as have a growing number of social histories) the relative insignificance of the Reformation and confessionalization as transformative influences on the discourse or punishment of blasphemy, choosing as his trajectory rather the "birth" of the crime in the thirteenth century and gesturing towards changes in its meaning toward the beginning of the seventeenth. Here the Reformation provides an intensification of focus rather than an inherent turn down a different path. He is aided in this approach by his rejection of the elite-popular distinction which characterized the early version of the confessionalization thesis; rather than looking at elite and popular discourses separately, he assumes from the beginning that they must be connected. This strategy is effectively employed here, although it does tend to cast a particular light on the punishment of blasphemy as a matter of social consensus rather than social disciplining that may not sit well with all readers. Secondly, in its refusal to analyze behavior as symptomatic of belief - Schwerhoff prefers to see it neither as a matter for the analysis of piety nor as index of secularization - and in the resulting willingness to look at politics and religion as inherently one object, it not only reflects the concerns of a number of linguistic theorists but also moves closer to the sorts of analysis coming out of the discipline of religious studies in the last decade. In this sense, at its best moments it presents a sort of cultural histoire totale of medieval and early modern life seen through the prism of this particular crime that will be most comfortable to readers who can accept the elision of specifically religious categories with politics and culture in the analysis of a matter that nonetheless appeared both to contemporaries and to us today as intimately related to religion.

Schwerhoff's multipronged approach and emphasis on the contrast between ideal and reality, as well as the attempt to unite (versus the tendency of a great deal of social and cultural history) the intellectual and the practical worlds of the discourse of blasphemy lead to a colorful and provocative picture of the early modern world of cursing. Few historians writing today are so at home simultaneously in the world of learned discourse and in the minutiae of archival social history. The book merits our attention as one of the best recent titles in early modern history.