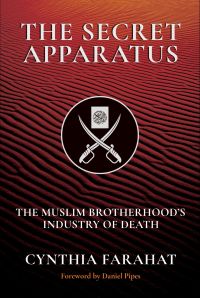 People explore their identities via peers, allies and foes. Look at fraternal lodges: Freemasons from the 13th century or the Catholic Jesuit Order since the 16th century. Since the 13th century emerge more Islamic brotherhoods. In the 19th century, a dozen Muslim brotherhoods often call Salafis their forbears back to the advent of Islam. Some "modernized" are now for 150 years not just in the Mideast, but spread in the Americas and Europe. Thus, Cynthia Farahat rings a liberal bell on the Muslim Brothers: Islamists, a Secret Apparatus plus jihad for the caliphate. But how?

To answer this, Farahat uses her experience, current literature and files. Usually, academics dryly narrate the past often based on primary sources. Not so with Farahat. To her, it is personal, since she and her family were threatened when she co-founded the Liberal Egyptian Party for peace with Israel, capitalism, and the separation of mosque and state. One of her books was banned by al-Azhar University for criticism of the blasphemy law. With the help of the Middle East Forum's president Daniel Pipes, who wrote his overview in the foreword, she finally came to America.

What makes her book outstanding is her ability to research transregional flows of ideas across eras and continents. For instance, she picks up an event in Cairo of 1948. In al-Abbasiyya the police officer Subhi Salim spotted a Jeep without license plates and with passengers belonging to the Muslim Brothers. He stopped it; they escaped, but left their bombs, bullets, and papers with the Secret Apparatus' explosive plan to burn Cairo (as it happened in 1952). This traffic stop revealed the existence of that Apparatus, its bylaws and shadowy double structure.

Farahat explores this Secret Apparatus (also al-Jihaz al-Khass) in 13 chapters of which the headlines are telling: the Incubator of Terror, History Is Not History, World Domination, Temptation and Terror, Industry of Death, Art of Death and Militarizing Islam, Blood Sacrifice, Vanguards of Organized Invasion and Franchising Terror, Salafists and Shi'ites, Civilization Jihad Operation and Not Your Bastard. Enriched by her many interviews, these eye openers may surprise readers for the sophisticated levels and substructures.

The Muslim Brothers have not left much archival material for solid research, partly due to their persecution, and partly to ensure their preferred version of events is the only one that remains. However, there are memoires, secondary literature, and audio or video recordings. Of course, she could have used some archives of the surrounding or colonizing countries and free entities that would diversify and enrich her methods and big story. No doubt, in new editions she may verify points about the Secret Apparatus' origins and her key ideas about how it absorbed many ideologies from the far right to far left, acting like a "global chameleon."

Since 1760, there have been nine well-documented generations of interactions between America-Mideast-Europe (counting about 30 years per age group). For example, the German explorer Karsten Niebuhr joined the Royal Danish Expedition to "Arabia deserta," where, also inspired by Ibn Taimiyya, Muhammad Ibn Abd al-Wahhab became known as an Islamist. Aside from wars, Mideastern and Western societies developed in parallel. With colonization and globalization, all came closer, leading not only to analysis and exchange of ideas, but also to syntheses on how to rule groups and life. Farahat points at the pan-Islamist Jamal ad-Din al-Afghani, a key figure of Islamism's revival. Add to this 1914 Max von Oppenheim's ideas on the World War One Hindu-German and Islamist cabal that led to the founding of the Muslim Brothers in Egypt as well.

With al-Afghani's ties to India and even European lodges, she deals with the Hanbali school of thought as the most rigid of the four orthodox Sunni madhhabs of jurisprudence. She traces Ibn Taimiyya, Ibn Abd al-Wahhab and Muhammad Abduh back to the spirit of Salafists. This leads to the fifth generation of Islamists, born in two decades before 1900. Among them are reformers as Rashid Rida, Salih ash-Sharif at-Tunisi, Shakib Arslan, Abd al-Aziz Jawish and Muhammad al-Khidr Husain. Most were in von Oppenheim's jihad circles, says Farahat, and engaged in the Islamic Awakening as Khidr became later al-Azhar's Grand Imam, a base of Islamism as well.

Farahat notes that Islamists changed history by realizing von Oppenheim's (the German-Ottoman Abu Joint Jihad) promise to Kaiser and Caliph of unleashing "Muslim fanaticism that borders on insanity" in 1914. There Amin al-Husaini served as an Ottoman officer of the fifth Islamist generation, which influenced the Muslim Brothers' leader Hasan al-Banna and his group of founders. This Brotherhood, stresses Farahat, was a blueprint for most modern Islamist groups as imagined by the father of the Islamic Awakening al-Afghani: they utilize Western technology for their cause. She says that al-Banna built a forum that became one of today's "most complex criminal syndicates." Their power lies in its operatives' patience and adaptability. They integrate into their surroundings and study adversaries to camouflage amongst them. The author may also check the sway of the Ottoman Special Organization - Teşkilât-ı Mahsusa.

The brotherhood's founders also learned from leftists after World War One. Since 1919 most Socialist or Communist parties spread in the Mideast in parallel to the Italian Fascist and German National Socialist groups. A steady exchange ensued between them, like the Young Men's Christian (or Muslim) Association, and they opened up for women too. Muslim Brothers adopted some rules of the Soviet's International Apparatus in the 21 orders of the Comintern. In the Brothers' literature, explains Farahat, the International Apparatus is referred to as an-Nizam al-Alami (or al-Jihaz ad-Duwali). As the Comintern, the Muslim Brothers are always "prepared for transition to illegal conditions," which is clear from their military preparations in times of peace. Like the Comintern, they require a secret apparatus even as they may operate openly. This secrecy kept their global mission under its International Apparatus after 1961, 1963 and 1991.

Surely Farahat's book will advance comparative studies on totalitarian groups. The Left met one of its "Jeep points" as Soviet leader Khrushchev gave his 1956 Secret Speech to Party Congress on Stalin's crimes. He criticized his cult of personality, putting secret services against comrades and revealed his fatal system with 383 lists for tens of thousands to be killed. Eventually some of his helpers wound up on death lists too. As Abd an-Nasir read it, he was astonished how one man got such power. Yet, in May 1958 Khrushchev explained to him how to rule in a one-party system.

I am not aware of files on Abd an-Nasir as a member of the Communist Party, even if a family source said so (170), or that he aspired to be a caliph in 1961 (225). After his lost 1967 war he told the East German envoy Gerhard Weiss, "Without declaring it officially, in reality we are Communists." As the Soviets vanished in 1991, many Arab leftists turned Islamists. This is a story of secret groups within groups, adapting also alien rules and ideas to advance their mission.

The Egyptian-American author Cynthia Farahat displays a unique fountain of knowledge and information that leads to deeper insights, answers and questions on the origins and webs of now two dozen key groups of the Muslim Brotherhood as local, regional, and global branches.